The Australian Dollar has been stuck in a relatively tight range against its lower-beta counterparts in recent weeks. However, a bearish Head and Shoulders suggests the risk-sensitive currency could be at risk of a reasonably significant decline against the US Dollar. Meanwhile an Ascending Triangle pattern points to further upside for AUDJPY rates.

The AUD/USD exchange rate has continued to oscillate in a fairly tight 200 point range since storming to multi-year highs at the end of February.

Although the longer-term outlook appears relatively bullish, with a Golden Cross formation taking place on the moving averages, a Head and Shoulders topping pattern suggests that a downside push is on the cards in the coming weeks.

Breaching psychological support at 0.7600 is required to validate the bearish reversal pattern and trigger a pullback towards former resistance-turned-support at the August 2020 high (0.7413).

Zooming into the daily chart bolsters the near-term bearish bias portrayed on the weekly timeframe, as prices fail to clamber back above the Head and Shoulders neckline.

Slipping below the 8-EMA (0.7760) likely intensifies selling pressure and triggers a pullback to the trend-defining 55-EMA (0.7700). Hurdling that opens the door for sellers to drive the exchange rate back to key support at 0.7560.

Once again, a close above 0.7810 is needed to invalidate bearish potential and bring the yearly high into focus. 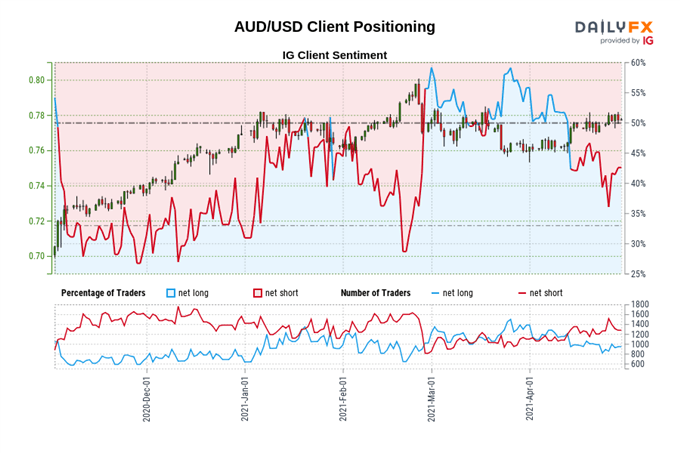 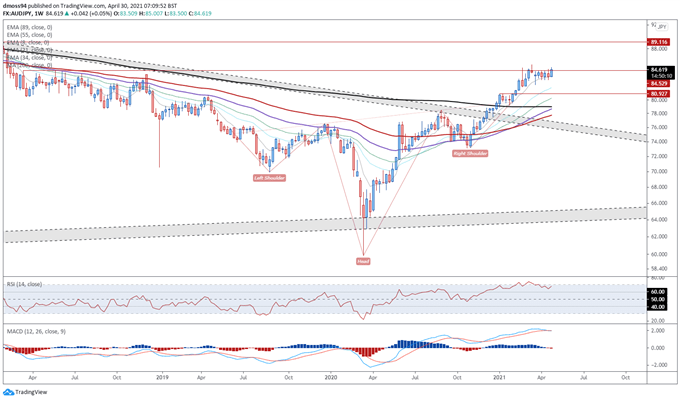 With the MACD tracking at its highest levels since 2017, and the RSI eyeing a push into overbought territory, the path of least resistance seems higher.

A weekly close above 84.60 probably signals the resumption of the primary uptrend and opens the door for the exchange rate to probe the 2017 highs just shy of 90.00.

On the other hand, if 84.60 holds firm, a pullback to former resistance-turned-support at 80.93 could be on the cards. 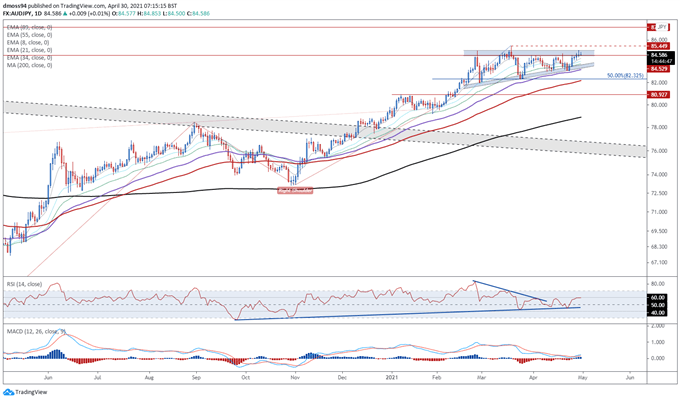 An Ascending Triangle pattern carved out on the daily chart also hints at further upside for AUD/JPY.

Bullish moving average stacking, in combinations with both the RSI and MACD indicator tracking firmly above their respective neutral midpoints, is indicative of building bullish momentum.

A convincing close above 85.00 probably validates the continuation pattern, with the implied measured move suggesting price climbs an additional 3.5% from current levels to test 88.20.

However, if triangle resistance holds firm, a decline to the 34-EMA (83.75) would likely eventuate. 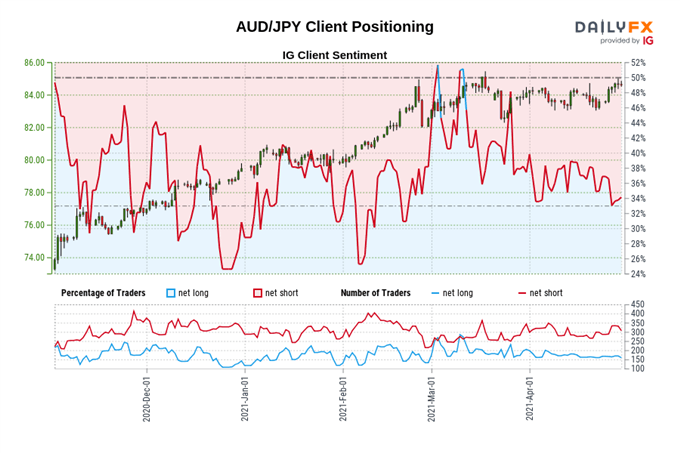