After an explosive first two months of the year, copper prices endured a period of profit taking throughout March. High global bond yields over the course of the month presented a challenge for growth-sensitive assets, a cohort defined by base metals like copper and the tech-heavy Nasdaq 100. Yet copper prices aren’t necessarily on their backfoot either. With central bankers beating the drum that higher bond yields reflect economic optimism, it may be the case that the recent consolidation in copper prices is a much-needed breather after a multi-week surge.

In fact, copper prices appear to be in a symmetrical triangle as 1Q’21 comes to an end; the copper/gold ratio has been flagging, poised to continue in the direction favoring higher copper prices relative to gold. If we’re heading into a period with substantial US economic growth as vaccination rates increase, never mind the prospect for more fiscal stimulus in the form of a $2 trillion-plus infrastructure bill, then it stands to reason that the fundamental backdrop for copper prices remains strong. 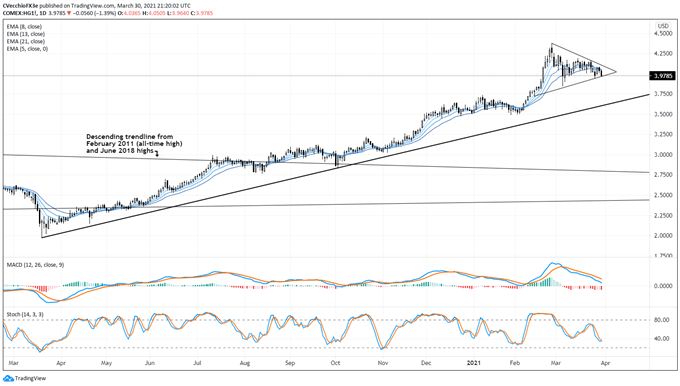 The last time we checked in on copper prices it was noted that “the bullish breakout is running faster and further than I reasonably anticipated, but the outcome is nevertheless in line with expectations. Copper prices are looking frothy here, however, with both daily MACD and daily Slow Stochastics at their most extreme bullish/overbought readings over the past 52-weeks, and the differential between the current spot copper price and its daily 21-EMA at its widest differential over the past 52-weeks.” Incidentally, this comment was made on February 25, top-ticking the high for the year.

Since then, the forth has come off. No longer is it the case that daily MACD and daily Slow Stochastics are at 52-week highs, nor is it the case that copper prices are too far extended from their daily 21-EMA. The extreme readings in the technical studies have dissipated. Copper prices, however, have stayed elevated, consolidating into a symmetrical triangle throughout March.

Given the fact that the symmetrical triangle formed with the preceding move of the bullish variety, continuation higher is eyed. In the last copper price forecast it was also noted that “with the fundamental backdrop supportive, the modus operandi for copper traders should be to buy the dip at present time.” This remains this strategist’s point of view. 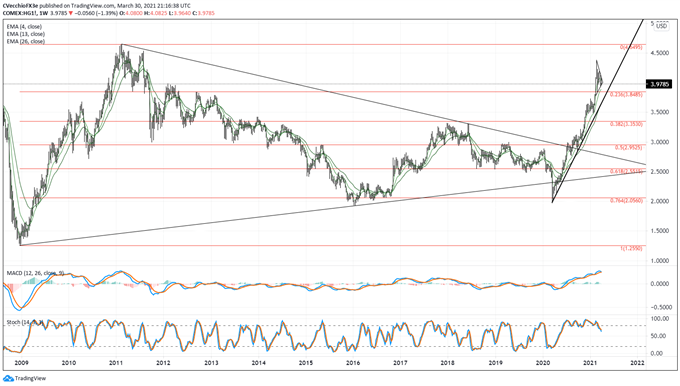 In the late-February update it was noted that “all-time highs from 2011 at 4.6453 are in sight, even if there is a brief pullback.” The brief pullback appeared to have played out through March. Accordingly, the forecast from mid-February remains valid: “Copper prices’ breakout above the descending trendline from the February 2011 and June 2018 highs suggests that a multi-year bottoming process commenced in mid-2020. This point of view is reinforced by the failed bearish breakout in early-2020, which saw the multi-year symmetrical triangle support temporarily lost for a few weeks. Clearing the June 2018 high officially ended the multi-year series of ‘lower highs and lower lows.’ As long as the uptrend from the March and October 2020 swing lows is maintained, copper prices retain a bullish bias.”