Gold Holds Up Despite a Firmer Yields and USD

Despite a continued rise in real yields and a slighter firmer USD, which is typically bearish for the precious metal, gold prices have held up relatively well, posting a second consecutive weekly gain for the first time since December. As such, this begs the question, is gold reaching a turning point?

In the last week, the Fed faced its first credibility test of its new (AIT) policy launched in August. The Federal Reserve forecast inflation to be above its 2% target, however, continued to project interest rates remaining at the zero bound through to 2023. While markets may continue to price in earlier than expected tightening from the Fed, Governor Powell’s message was clear, they will not signal an intention to tighten policy until “actual” progress is made. That said, this has arguably provided a new lease of life for gold.

On the flip side, the Fed said it would launch a review of the supplementary leverage ratio, letting the exemption of the capital rule expire on March 31st. The SLR is a capital rule that requires banks to hold a minimum of 5% capital of their total assets. Last April, the Fed had exempted Treasuries and reserves from banks, which allowed them to build balance sheets by purchasing Treasuries. As such, with the decision to allow the capital rule to expire, the view is that this could reduce bank demand for government bonds as banks would have to hold up more capital against Treasury holdings, resulting in higher bond yields. While this was seen in the initial reaction upon the announcement, the moves were relatively tame. However, while this poses upside risks for yields, three speeches scheduled for Jerome Powell next week is a sign that the Fed will calm those uncertainties regarding spiking yields.

Aside from the Fed Governor speeches, there is not a notable amount of key data releases to look out for next week. In turn, the ebb and flow of risk sentiment is likely to dictate gold, although, it is important to point out that we will be heading towards month-end while not officials until the following Wednesday, I suspect there will be some interest next Friday.

In terms of levels to watch, the key area on the topside is 1760-65, prior support and now resistance. I have previously said before that the technical landscape does not change unless there is a close above this area and that remains the case currently. On the downside, support resides at 1720 and 1690 below. A weekly close above the 20DMA (1737) will be a good sign for bulls and help pave the way for a test of the abovementioned resistance zone. 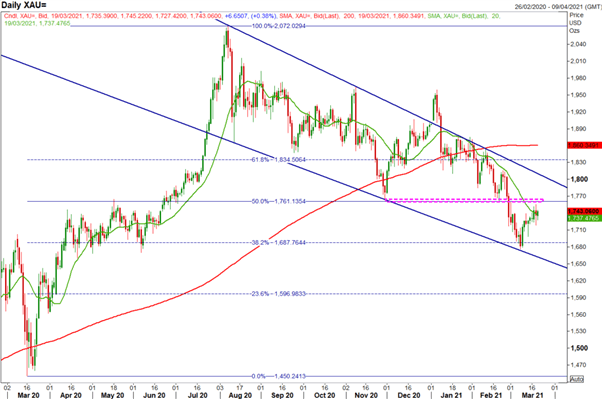