Historically speaking, copper prices have proven highly sensitive to global growth and liquidity conditions. With the Federal Reserve Chair Jerome Powell swatting down taper talk and reiterating his commitment to low interest rates, as well as the progress towards US President Joe Biden’s $1.9 trillion American Rescue Plan, the US Dollar has started to weaken as US real yields erode. Now that the focus is back on swelling debts and low rates, copper prices have seen renewed favor – which is in line with our 2021 macro outlook.

A weaker US Dollar can feed into a stronger Chilean Peso, an important factor for copper prices. Chile accounts for more than 50% of the world’s copper exports, so a weak US Dollar environment (akin to 2009-2011) should be supportive of copper prices, same for iron ore (vis-à-vis strength in the Australian Dollar). 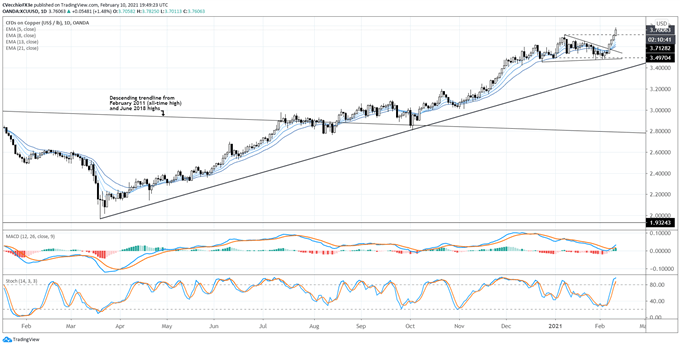 As noted previously, “copper prices have coiled into a bull flag between 3.4970 and 3.7128 since the start of 2021, and in context of the break of the descending trendline from the February 2011 and June 2018 highs, it appears this consolidation is part of the continuation process higher.”

Copper prices have hit fresh yearly highs, breaking out of two separate consolidation patterns. The first breakout came out of a symmetrical triangle that formed between late-December and early-February, which in context of the preceding move, was a bullish continuation effort. Second, and similarly, the sideways channel that emerged between January and February has seen resistance breached (which was the high point of the aforementioned symmetrical triangle).

Copper prices are above their daily 5-, 8-, 13-, and 21-EMA envelope, which is in bullish sequential order, Daily MACD is trending higher above its signal line, while daily Slow Stochastics have reached overbought territory. Regardless of how you slice it, copper prices are starting a bullish breakout, and the path of least resistance appears higher. 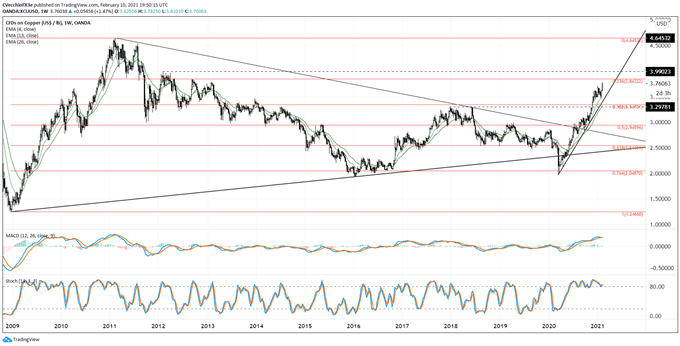 Copper prices’ breakout above the descending trendline from the February 2011 and June 2018 highs suggests that a multi-year bottoming process commenced in mid-2020. This point of view is reinforced by the failed bearish breakout in early-2020, which saw the multi-year symmetrical triangle support temporarily lost for a few weeks. Clearing the June 2018 high officially ended the multi-year series of ‘lower highs and lower lows.’ As long as the uptrend from the March and October 2020 swing lows is maintained, copper prices retain a bullish bias.