The S&P 500 continues to trend higher within the confines of an upward channel, and as long as it stays above the lower parallel of the pattern then it remains positioned for higher prices. A good test of that threshold may develop this week.

A bullish outlook isn’t without its risks, though, as the market is quite extended when looking all the way back down at the March low just under 2200. There has also been quite a bit of speculative fervor (i.e. TSLA) lately that suggests we might be at a near-term zenith. But nevertheless the trend remains pointed higher until we see pervasive price suggesting a bearish bias is warranted.

Getting back to that channel formation, the first thing that needs to happen for the bias to turn negative is for it to break. From there we could see support around 3640 tested and then the a very important test of the March trend-line. 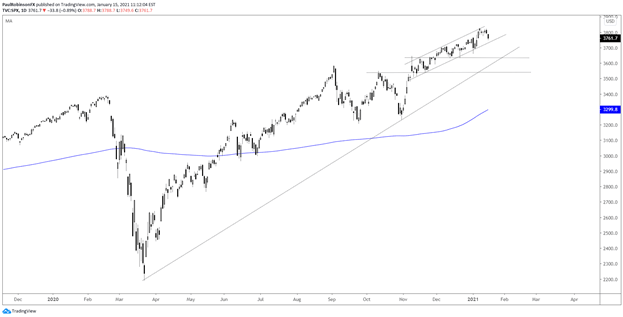 The DAX is trading off its recent record highs. Friday’s decline is putting pressure on the prior breakout level at 13795 and the trend-line from the end of October. If the market is to hold up here it needs to turn around quickly. A break below the trend-line could bring into play support around 13460, and from there further weakness could have the March trend-line put to the test.

The FTSE 100 has been one of the stronger indices in the short-term, with it outpacing most other major indices so far this month. The trend higher may continue as long as either trend-line support or price support around 6530 holds. What lies ahead on strength is a potentially big roadblock. Several lows created during the middle portion of 2019 could make for a possible ceiling. The area to watch is from around 7000 up to over 7100. Should the FTSE reach that point we will have to reassess based on price action.