The Nasdaq 100 index reached its all-time high of 12,635 on December 9th and entered a consolidative periodthereafter. The index appeared to have been temporarily overbought after surging more than 14% over the past five weeks, rendering it vulnerable to a technical pullback when profit-taking kicked in.

Recently, the Nasdaq 100 has formed an “Ascending Channel” (chart below) as it clawed back from deep single-day losses seen on November 9th. The index has also broken a key chart resistance level at 12,240, which it failed to breach on three attempts during the past few months. Breaking this level now may have opened the door for further upside potential with an eye on 12,623 – the 76.4% Fibonacci extension. Previous resistance levels, once broken, become new support levels.

The overall uptrend remains intact as suggested by ascending Simple Moving Average (SMA) lines as well as the Bollinger Bands. The index trended higher within its upper Bollinger Band, with the middle Bollinger line (also the 20-Day SMA) serving as an immediate support level.

Near-term momentum appears biased towards the downside, however, as the MACD indicator has likely formed a “Death Cross” on the daily chart. A deeper pullback below 12,240 may lead to further losses with an eye on 12,067 (38.2% Fibonacci extension) for support.

On the weekly basis, the Nasdaq 100 index registered an astonishing gain of 85% from the end March untill early December (chart below). The overall trend remains bullish-biased, with the recent consolidation potentially paving the way for higher highs. Both the 10- and 20-Week SMA lines are trending higher, suggesting that the medium-term bull trend remains intact.

The MACD indicator has likely diverged with prices, suggesting that upward momentum might be fading. Therefore, the index may see a bumpy road ahead towards the end of the year. 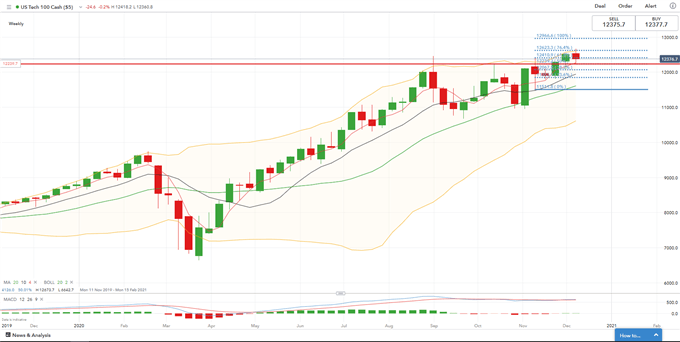