The move higher in Aussie may at the least pause in the coming week as the trend becomes extended; short-term technical structure to watch.

AUD/USD traded to its highest levels since early June 2018 in last week’s trade, a generally impressive feat considering where it was back in March. In the near-term the trend could at the least pause, if not experience an outright pullback.

To help guide the trading bias in the week ahead eyes will be on the 4-hr chart, where AUD/USD broke out from the confines of an orderly upward channel. It had been inside this structure for nearly a month, and with its recent move outside it could act as a “throw-over.”

A throw-over is an event that marks an exhaustion in the trend, commonly seen at the end of a clean orderly move like the one we have seen in Aussie. Using the upper parallel is the key from this point forward.

The top-side parallel was once considered resistance, so now it turns into the first source of support. Hold the line and a consolidation or immediate rise off it could unfold. This of course keeps the upside intact. Break below and this is where the recent leg higher becomes validated as a throw-over.

In this second scenario, this is where you will often times see a break to the bottom-side of the channel (again first to be treated as support) with an eventual break of it that potentially leading to an aggressive move lower. 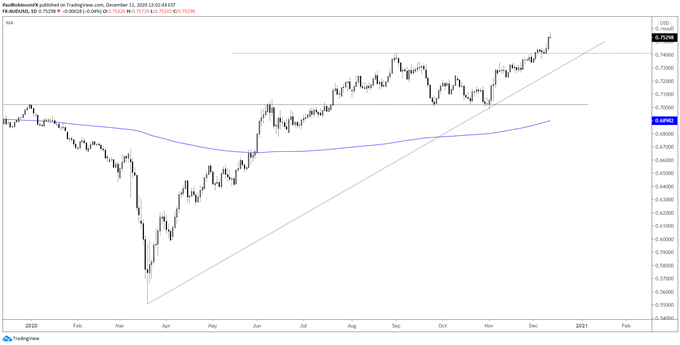 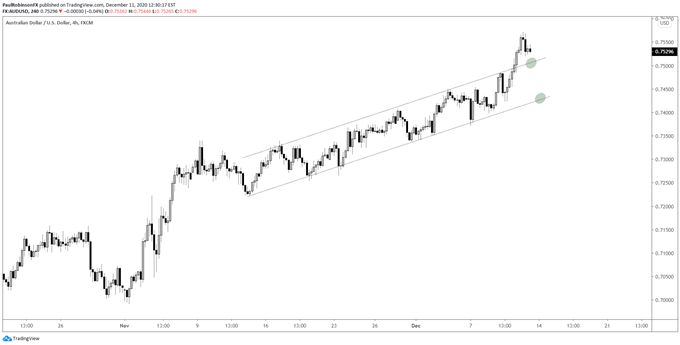