AUD/USD trades around its highest level since August 2018 after tagging a fresh yearly high (0.7414) at the start of September, but failure to retain the upward trend from June may open up the 50-Day SMA (0.7120) as the exchange rate carves a series of lower highs and lows.

In turn, the technical outlook for AUD/USD remains constructive as the exchange rate appears to have established an upward trend in the second half of 2020, and the Australian Dollar may continue to outperform its US counterpart as the trendline largely mirrors the positive slope in the 50-Day SMA (0.7120).

With that said, the pullback from the yearly high (0.7414) may end up being an exhaustion in the bullish trend rather than a change in market behavior as key market themes carry into September. 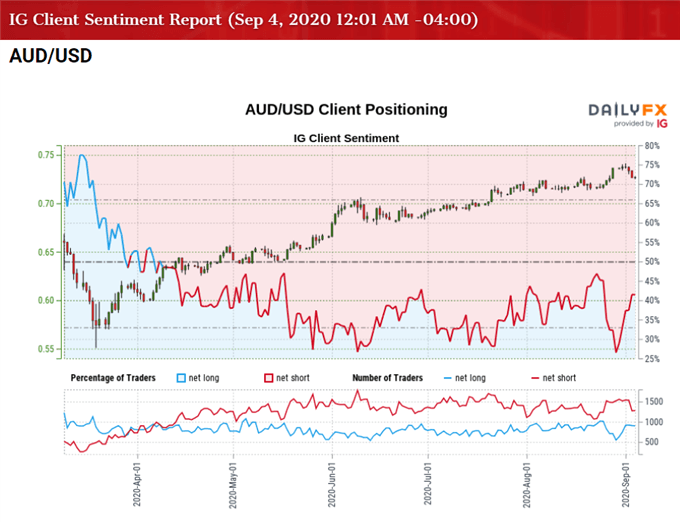 The rise in net-long position has helped to alleviate the tilt in retail sentiment as only 37.17% of traders were net-long AUD/USD earlier this week, but the crowding behavior looks poised to persist as open interest narrows a mere 1.65% from the previous week despite the decline in net-short position.

Looking ahead, it remains to be seen if AUD/USD will preserve the upward trend from June as it carves a series of lower highs and lows, with a break of trendline support raising the scope for a move towards the 50-Day SMA (0.7120) as the Relative Strength Index (RSI) falls back from overbought territory.

Recent developments in the RSI instilled a bullish outlook for AUD/USD as it threatened the downward trend from earlier this year to push into overbought territory, but a textbook sell-signal emerged at the start of September as the indicator quickly fell back below 70.