Gold Price Forecast: Calls for a Top are Premature Even if Right

Gold underwent one of its larger weekly ranges ever

Last week was a wild one for precious metals, with gold carving out one of its largest absolute ranges on record. The $186 weekly range was only exceeded by a week in March and in August and September of 2011. On balance, this wasn’t a total shocker given how far gold had run recently.

But what does the volatility mean?

For now, gold could use some horizontal work to act as a sort of reset and work off overly bullish, overbought conditions. It would be ideal for this to develop while holding onto the 2011 peak as support. The 1920 level was broken briefly last week, but generally held. Staying above this level for an extended period will help build a base that could help gold launch later.

Should the trend-line from the March low break along with the Wednesday low at 1863, though, then more downside could be in store towards the 1800-area, another big spot from 2011. If this happens it takes some of the flavor out of the bullish case, but doesn’t entirely dent it.

Overall, the outlook for gold might look a little tenuous at the moment, but this won’t be the first time a strong bull market has shown signs of a potential top due to short-term price action, only to write it off later as a one-off event and keep on keeping with the help of a consolidation period. What would be concerning is if we saw gold collapse further, rebound, then fail. But all of that won’t be sorted out in a week, or four.

With that in mind, this coming week might not hold a lot of excitement for precious metals in terms of absolute moves, but with volatility high it could provide some back and forth opportunities for the nimble short-term trader.

Recommended by Paul Robinson
Check out the Q3 GOLD Forecast.
Get My Guide 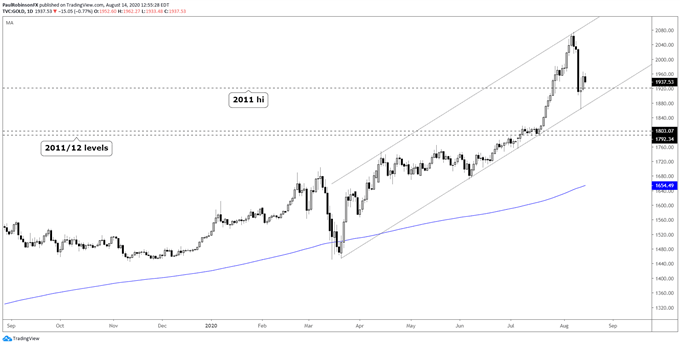