Dow Jones has 2016 trend-line to contend with

The Dow Jones recently traded off the underside of the 2016 trend-line it broke in March, and could find itself in a similar position again. What would be an interesting scenario is if the S&P 500 trades strongly higher to the 200-day MA, a tad over 3k, while the Dow lags and is unable to climb above the 2016 trend-line. The divergence could be a good sell signal given resistance is at hand. Whether this is the case or the Dow rallies in-line with the broader S&P, the rise off the low has yet to have been tested in a meaningful way. It seems likely that while we might not see a collapse again there will be some form of a drop that spooks the market. The next week could prove important.

Recommended by Paul Robinson
Are indices your thing? Check out the Mid-Q1 Update.
Get My Guide 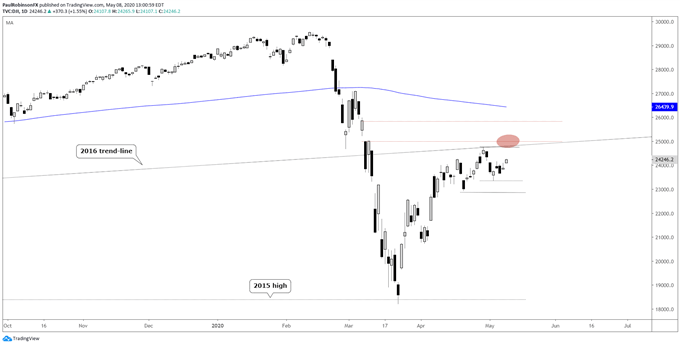 The DAX ran into the underside of the 2011 trend-line similarly to how the Dow Jones did at the 2016 trend-line, and like the Dow it also came off of its noted resistance. The market is trying to make a run back at it again, but could either fall short or turn off it once more. If this the case, then the area right around 10200 will become important again as it is a level that held for a couple of weeks during April. Overall, the feeling is that with Europe lagging behind the US we could see selling become more aggressive on any broad downturn that may develop in global stock markets.

The FTSE is grinding its way higher, taking three steps forward and two steps back. Just this past week the index was trading at the same levels seen during the first multi-day rally off the lows in March. A tepid recovery indeed, but not unexpected given the heavy exposure the index has to energy and financials. The upward trajectory is fragile, a break of last week’s low at 5702 would undermine the recovery and put the UK index at risk of falling back towards 5351 or worse. Even if it can make a new high above 6151 the rally will still be viewed with a healthy dose of skepticism.