The Swiss Franc faced bearish pressure throughout much of 2019 versus its Japanese counterpart, until a break above the upper-bound of a downward trendline that formed early last year propelled the cross above 112.59 in the final days before the New year, the highest level since December of 2018. The break higher was proceeded by a ‘golden cross’ as the 50-day moving average crossed over it’s 200-day moving average in late November.

While the cross has exhibited strength in recent weeks, signs of exhaustion in the move have manifested to begin 2020, currently trading at 111.57, nearly a full percentage point off the recent high of 112.59 set on Monday. Currently, the cross is settling against its recent range of consolidation from December which may offer support, however a breach lower could push the pair down to a formidable range of consolidation from earlier last year, but support may be provided by the 50-day moving average currently at 110.47 before reaching that level. 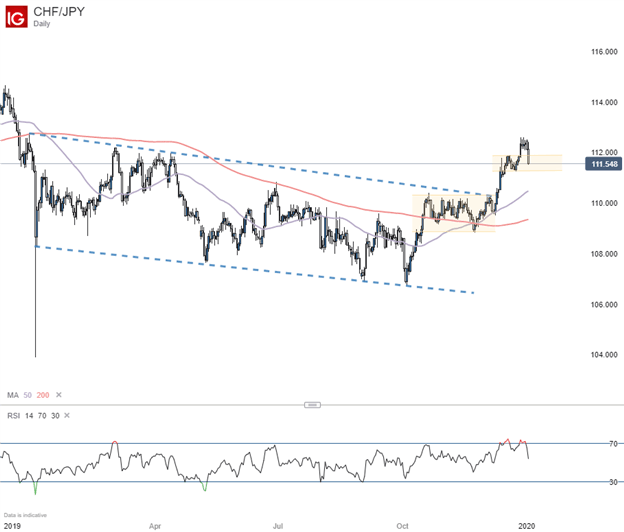 The Franc saw a rough start to 2019 against the New Zealand Dollar as the Kiwi marched 2.59% higher in the first quarter of 2019. However, the strength was short-lived and saw a breakdown which sent the cross to 0.6163 by the following August, its lowest level since 2015. Despite the strength exhibited from the Kiwi in Q1, the Franc closed 2019 1.35% higher against the New Zealand Dollar.

Nonetheless, since hitting its August multi-year low, the cross has now shifted higher, touching 0.6553 on December 26th, the highest level since July. If the reemergence of global risks is held at bay, bullish momentum could extend further as the 50-day moving average has now overtaken the 200-day, forming a golden cross. 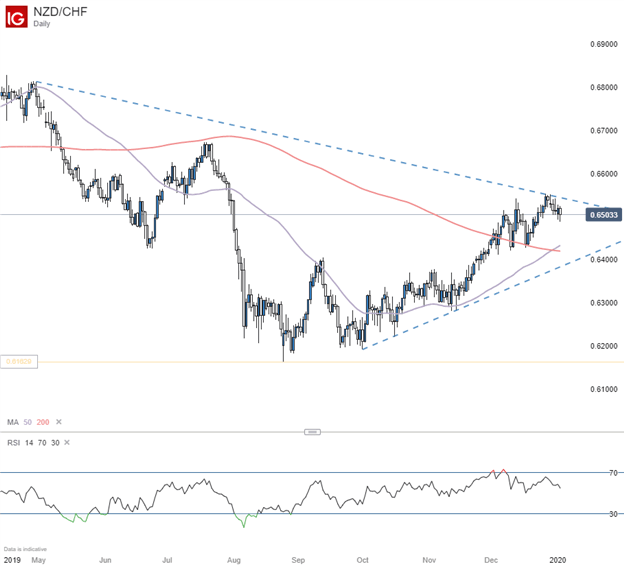 After a small pullback in recent days, bulls will now be looking for recent levels of prior resistance to hold as support before attempting to break above last week’s highs and aim toward the July high of 0.6672, which stands as the next area of resistance.