The Dow Jones continues to trade higher after testing the trend-line passing over the peaks set in 2018 and the summer high. Continuing to give the trend the benefit of the doubt, the next level of resistance could arrive via an upper parallel of a channel dating back to the first half of the year. At this time the level clocks in somewhere around the 28800-level.

Should the market weaken, the first area of support arrives via the trend-line off the October low, then the aforementioned slope from 2018. Generally speaking, seasonality is favorable and will be a tailwind towards keeping the market at the very least from falling apart. 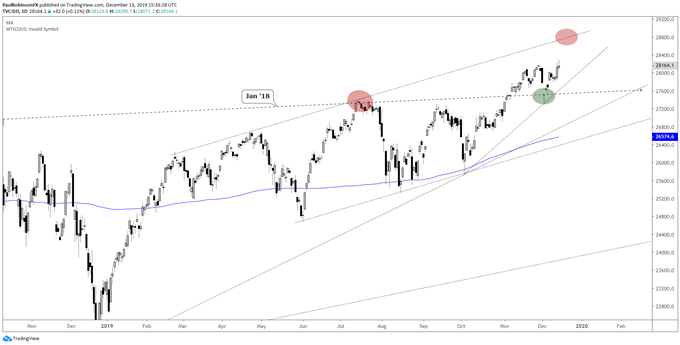 On Friday, the DAX gapped to the highest levels since January 2018, but failed to hold onto it and traded back towards the top of the recent trading range. This doesn’t dent the broader trend, though, and it may not be too much longer until the German benchmark is trading at or beyond the record high set at 13597. Should Friday’s small failure turn into something more, then a good spot to look for support would be the trend-line rising up from the August low.

The FTSE has been all over the map lately, lagging the broader global equity rally by a considerable margin. On Friday, following the vote, the market exploded higher, taking it up to the late November high and trend-line running down off the July high.

The way things have been going it will be hard to trust the move higher (or any that develop lower), things have been stopping and reversing. With resistance at hand, the next move might be a pullback, then perhaps higher if the FTSE can sustain above 7421.