Get our free guide to help build confidence in your gold trading strategy!

Gold prices experienced the worst month this year so far, dropping about 3.24 percent and slowly eating away at the impressive rally undertaken from June to September. This was also the bleakest performance since the Summer of 2018 as the anti-fiat yellow metal lost in favor to a cautiously stronger US Dollar. Where does this leave XAU/USD going forward from a technical standpoint?

Earlier this month, I noted how gold was attempting to break under rising support from July (pink parallel lines on the chart below). That attempt failed as prices bounced and then got stuck under key resistance at 1480. Now, the precious metal once again finds itself pushing for a downside breakout. However, prices have yet to breach the horizontal psychological barrier between 1445 and 1459.

A daily close under this area opens the door to resuming the near-term downtrend and reversing gold’s rally from earlier this year. That places the focus on the next support area at 1433 which has its beginnings from August 2013 highs. However, there are signals that gold’s near-term direction bias could favor the upside in the week ahead.

Most notably a Morning Star bullish candlestick pattern formed at the conclusion of the past 5 trading days. With upside confirmation, this could mark the beginning of a lasting upward bias, once again invalidating the break under long-term rising support. Positive RSI divergence is also present, showing fading downside momentum which can precede a turn higher or translate into ongoing consolidation.

Want to learn about using trader positioning as another element in developing trading strategies? Join me every week on Wednesdays at 1:00 GMT! 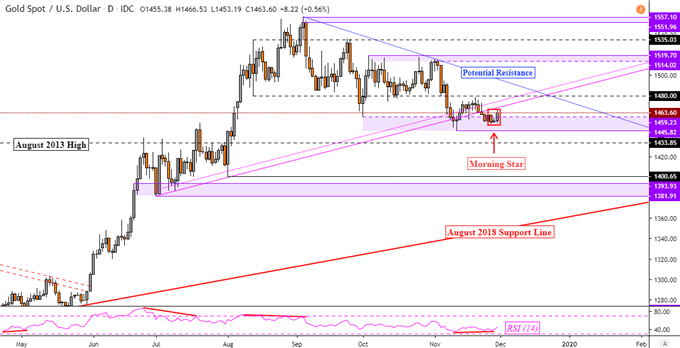 From a near-term standpoint, zooming in on the 4-hour chart already reveals an upside breakout. Descending resistance from the beginning of November (red lines on the chart below) was aggressively taken out. There was also the presence of positive RSI divergence in the lead-up to gold’s push above resistance.

Upside confirmation, via further closes higher on the 4-hour chart, could pave the way for a climb over the next 5 trading days. For follow-through, keep a close eye on the November 20 high at 1478. Taking this out exposes the November 1 swing high. A drop through 1459 - 1445 invalidates preliminary bullish signals. 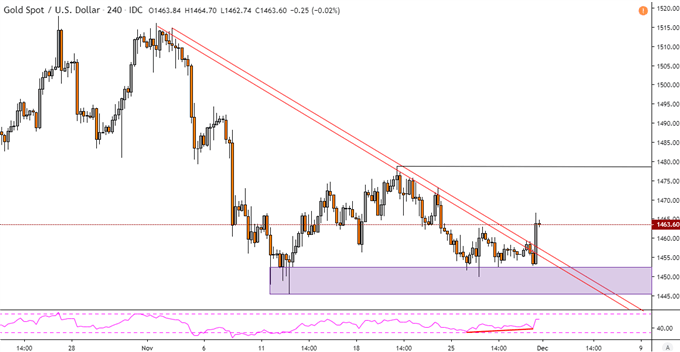 --- Written by Daniel Dubrovsky,Analyst for DailyFX.com