WTI oil burst to two-month highs, to remain choppy though

Just the other day it looked like perhaps crude oil wanted to finally embark on a one-way track (lower), but just as that started to gain traction buyers showed up and reversed the course. Nothing new, really, which is why the other day I made mention that oil needed to change character for shorts to gain traction, that is have it drop (as it did to start the week) and not recover right away.

That is all behind us, so where are we now? The WTI contract is trading at two-month highs, but that could only be for a moment as another course reversal remains a high likelihood. A decline from here could quickly bring into play the lower part of the channel, an area we will again have to watch as support.

If the burst higher can sustain, though seemingly unlikely, and price can push through the upper parallel of the channel, then there isn’t strong resistance until the October 2018 and April trend-lines. An extended move into those lines feels like wishful thinking right now with how things have played out. Expect more whip-saws, but be on the watch-out for signs of sustainable momentum. 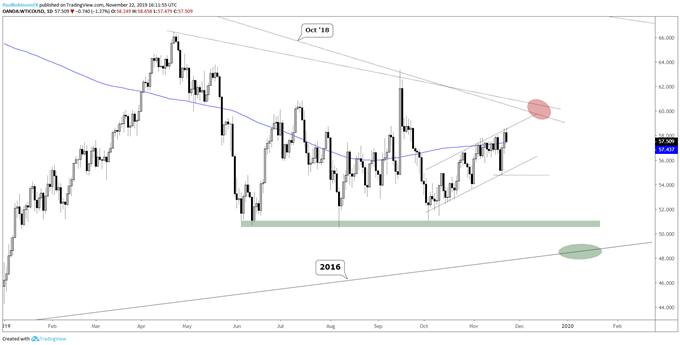 Brent is very near resistance, may stop short-term surge in its tracks

Brent crude oil of course looks similar to its sibling contract across the pond, except conditions are even tighter. The trend-lines in place above for WTI loom right at hand for Brent, along with the 200-day MA passing through. Indeed, a thicket of resistance up to around 66 to clear.

A turn down here keeps the channel structure in place, with the lower parallel eyed as support. It will take a clean snapping of that pattern and decline beneath 60.43 to get oil moving south towards the 2016 trend-line.