Brexit has roiled the British Pound since the June 2016 referendum. Over the last two months, however, GBP price action has been shaken up overwhelmingly in response to growing hopes that UK PM Boris Johnson would deliver a long-awaited Brexit agreement, which sent the Sterling surging. Yet the PM has faced a gridlocked Parliament and although British MPs approved Boris Johnson’s Brexit deal, they refused to support his fast-tracked timeline to deliver Brexit. Consequently, Boris Johnson was forced to request another Brexit delay until January 31 next year, which was approved unanimously by the EU27 despite France’s initial reluctance.

PM Boris Johnson subsequently withdrew his Brexit bill and called for a snap election in pursuit of gaining majority in the House of Commons and delivering Brexit by breaking the longstanding impasse that has roiled the UK economy. As a result, there’s a major ‘Brexit question mark’ outstanding that will likely last until the upcoming general election results are finalized. Lingering Brexit uncertainty could thus keep the British Pound largely rangebound until clarity emerges over Boris Johnson’s snap election and Parliament’s subsequent capacity to pass necessary Brexit legislation. 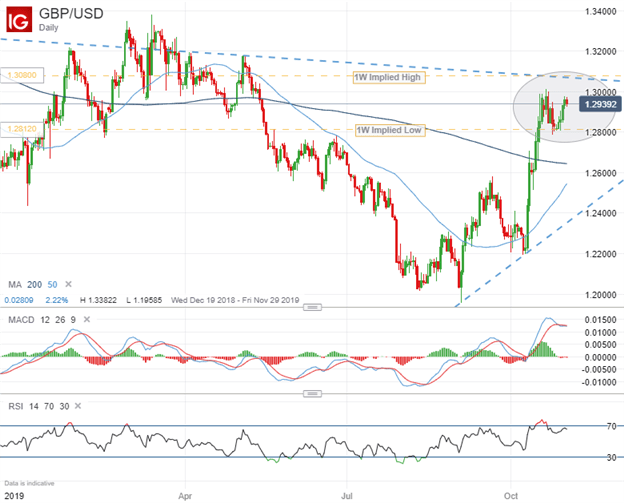 With that in mind – and keeping a close eye on UK election polls as traders speculate ahead of the December 12 snap election vote – it could be prudent to take a high-level approach when analyzing where the British Pound might head next. That said, GBP price action has recently compressed into a well-defined trading range underpinned by key technical levels of confluent support and resistance driven predominantly by the aforementioned Brexit developments. Spot GBP/USD has fluctuated roughly between the 1.28-1.30 handles since mid-October and these technical barriers could keep Sterling prices contained over the near term.

Also, options-implied trading ranges derived from at-the-money options contracts can also be used to highlight major areas of technical support and resistance with potential of keeping underlying spot prices generally contained. Mathematically speaking, 1-standard deviation options-implied trading ranges should encompass price action over the specified time frame with a 68% statistical probability. That said, GBP/USD 1-week implied volatility of 7.17% estimates that the cable will fluctuate between 1.2812 and 1.3080 over the next week. 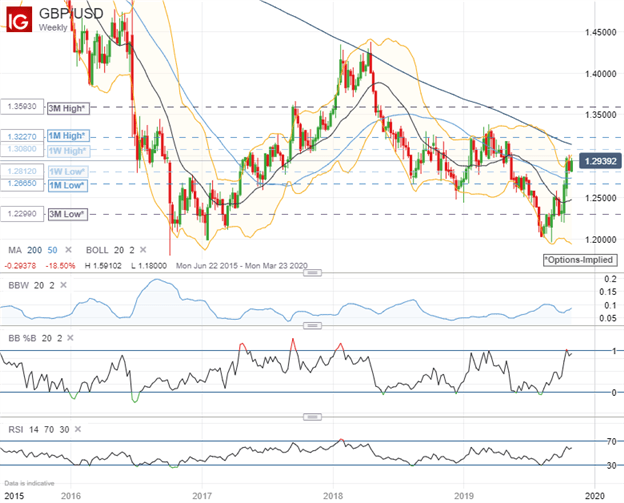 Looking further out with a focus on 1-month and 3-month GBP/USD options-implied trading ranges, which approximately aligns with the key upcoming Brexit dates of December 12 and January 31, we find that spot prices have generally ping-ponged between these important levels of technical confluence dating back to mid-2016. 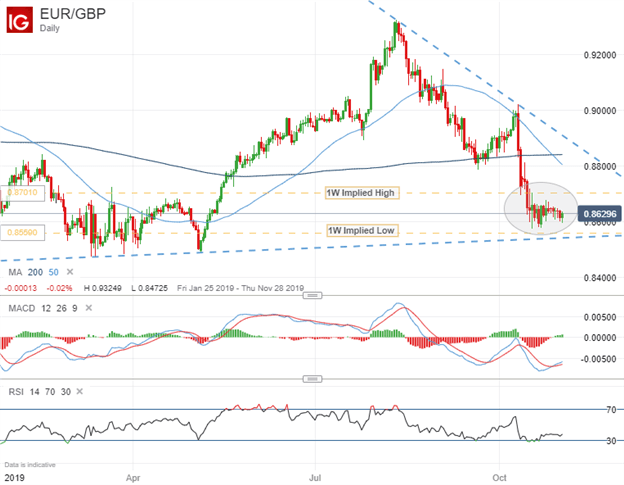 Likewise, spot EUR/GBP has also coiled into a tight trading range over the last 2-weeks. With the expectation that recent choppiness in the British Pound will likely continue until forex traders are provided with more Brexit clarity, EUR/GBP price action could be broadly contained between technical support and resistance indicated by its options-implied trading range. EUR/GBP implied volatility of 5.93% derived from its 1-week options contract suggests that spot prices will remain relatively anchored between 0.8559-0.8701 with a 68% statistical probability next week. 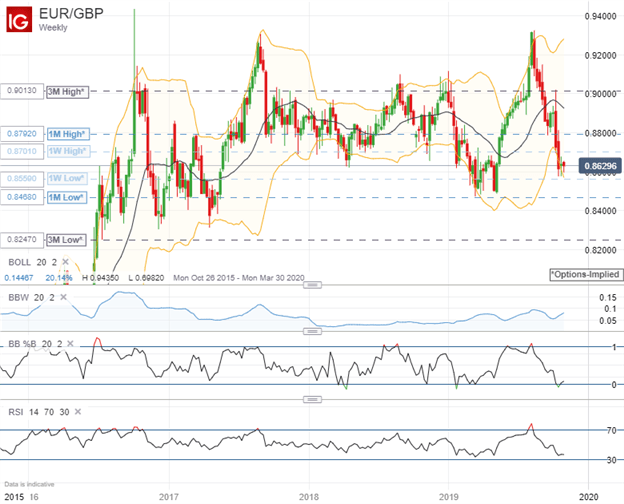