Check out our Q4 US Dollar forecast to see what will drive the price trend through year-end!

Last week marked an ominous turn in US Dollar technical positioning. An average of the benchmark unit’s value against its top four major counterparts – the Euro, Yen, British Pound and Australian Dollar – seems to have broken the uptrend established from early 2018, marking a major bearish reversal. 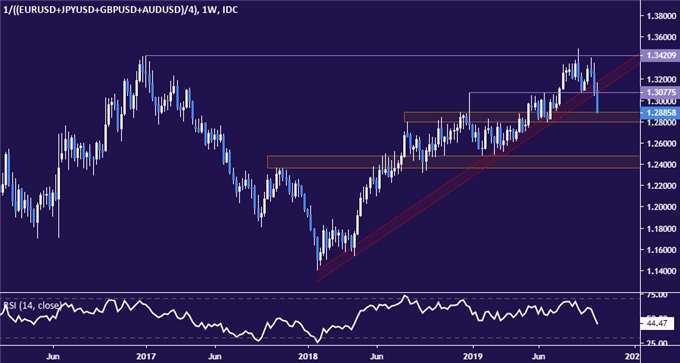 US Dollar chart created with TradingView

Bisecting the move into its constituent parts offers a warning for over-eager sellers however. A break in the first phase of the move higher was followed by a period of digestion that established a new base and slope for the second one. That brought prices to test three-year highs in the subsequent four months. 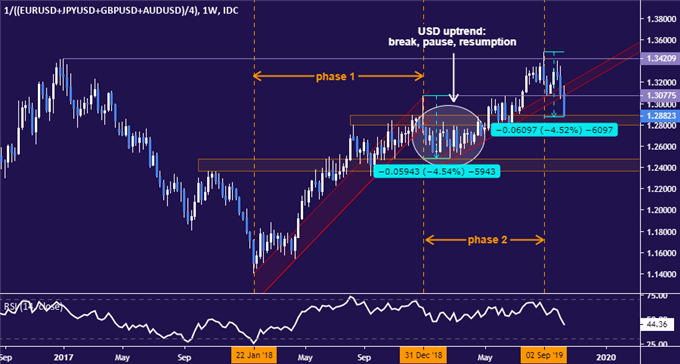 US Dollar chart created with TradingView

More interesting still, the magnitude of the pullback in early 2019 is nearly identical to the reversal witnessed thus far from the swing high in early September. Now as then, prices have landed squarely on resistance-turned-support defining the preceding upward push.

On balance, while the Greenback may have marked a major top, that need not necessarily be so. The argument for a corrective pause followed by upward resumption seems compelling enough to withhold judgement for the time being. The coming weeks ought to offer greater confirmation, one way or the other.