Euro Signal for Reversal Not as EURUSD Alone Suggests

Once again, we are met with a decision on how to weight our technical confidence in a market. Referencing the Euro, we were met with nascent signs of an emergent reversal for EURUSD. As the Euro’s most liquid cross – and generally the most liquid FX pair by a wide margin – this technical signal would seem to carry more than its fair share of authority. Yet, the instance of false breakouts in the broader markets, this asset class and even this pair over the past months should lead us to be careful about jumping to conclusions when our appetite for enormous trends and extreme risk/reward ratios starts to outweigh our better senses. Even if the Dollar were commit to a sustained collapse – perhaps the strongest motivation for a EURUSD climb – it would not ensure the Euro itself enjoys the bulk of the capital outflow versus other majors.

Taking a look at EURUSD’s daily chart, the first meaningful technical cue for a reversal was secured through Friday’s session. The pair clear the top of a descending channel that has guided the benchmark pair lower since it peaked in late June. That is appealing – as is the DXY Dollar Index’s slip which is the mirror of this chart – but there are more than a few technical barriers still immediately overheard. The 50-day moving average still stands at roughly 1.1050. The 38.2% Fib retracement of the June to October bear wave is a little higher at 1.1080. And, we haven’t even set a new higher swing high. Each of this milestones may be reached ahead, but bullish conviction should be held loosely until some of these markers are passed. 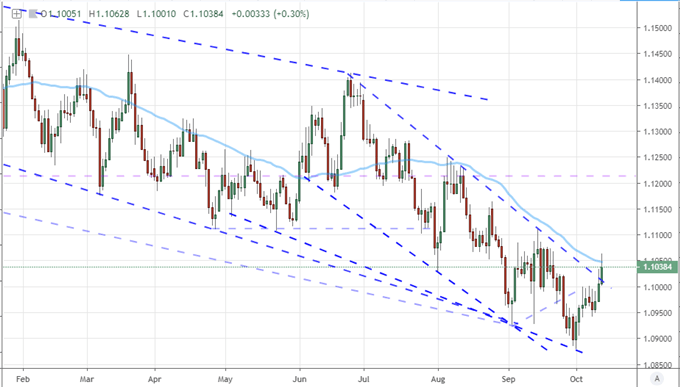 When looking at EURUSD, there is a conflict between the belief that bearish gravity may have taken over because we have already traded at multi-year lows this month, but the tempered pace raises arguments that it is instead stretched. With regards to the hold below the 50-day moving average, Friday’s close increased the consecutive days that we have traded below the average to 61 trading sessions. That is the longest period of technical bearish course since July 2015 when the exchange rate was at the end of a record-breaking collapse. This slide is far more restrained in pace and that adds to the sense that a close above may be ‘overdue’. Then again, previous jumps above the charge pattern were short-lived. 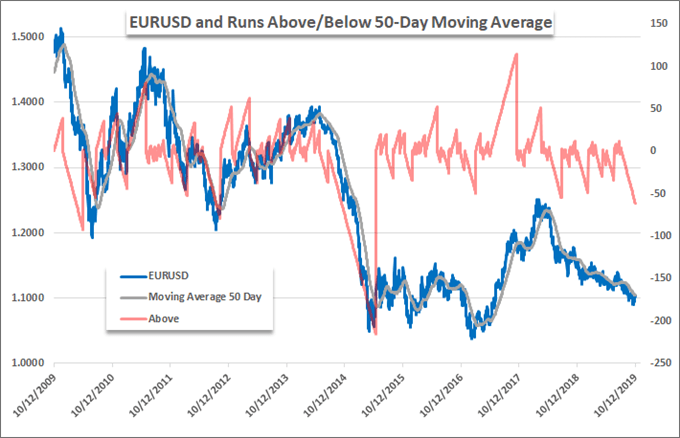 Taking a bigger picture look at EURUSD, we can better see the bearish course since early 2018 as well as the proximate lows we are pushing to start this month. I think something more meaningful to our analysis can be seen here however: the restraint and lack of commitment. We may have a general bear trend, but it is seriously lacking for momentum. The 10-week average true range and historical range (as a percentage of spot) is bottomed out, suggesting there isn’t much pressure to alter tempo or bearing. That being the case, we also have two consecutive week’s advance from the pair, and we haven’t seen a three-week climb since June 2018. Overcoming inertia is more difficult than overcoming a simple boundary on a tech pattern. 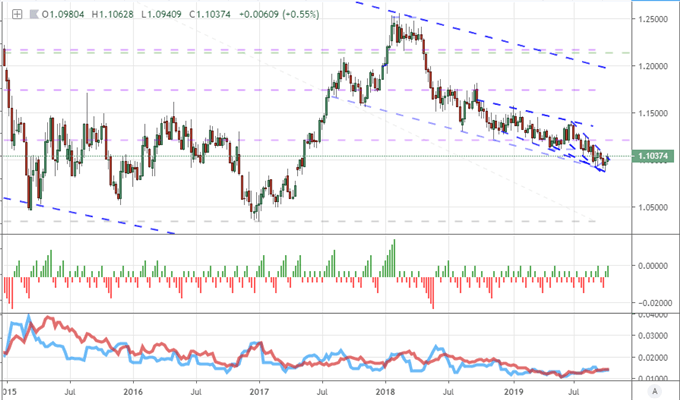 To reduce the Dollar’s perspective in the Euro evaluation, we start to see a very different picture of the second most liquid currency. Below, we have the equally-weighted Euro index comprised out of the ‘majors’. This has made little-to-no meaningful progress over the past months – and it could be argued not to have committed to a meaningful move throughout the year. A break is inevitable, but the quiet can last longer than our patience can hold out. To remind us of the market’s expectations, I overlaid the CBOE’s Euro implied (expected) volatility index. Since the ECB made its move, anticipation has ground to a halt. 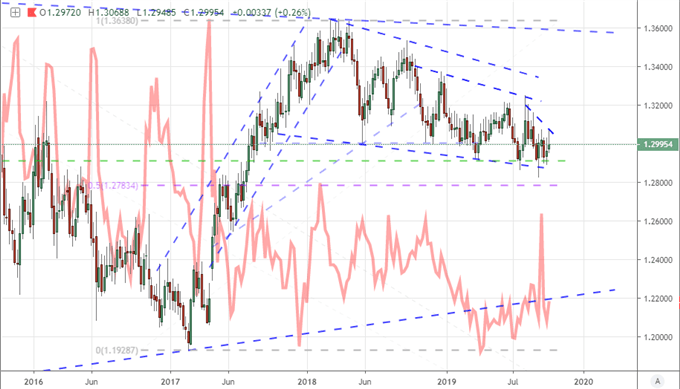 Another countervailing force that will act against the EURUSD’s recovery efforts is a distinct connection the Euro holds to some critical fundamental themes. A secondary position to the Dollar is one such driver, but I’m not particularly convinced the Greenback is ready to make a systemic move. It if doesn’t we will revert to other ‘motivations’. The prospect of returns on the currency will be another measure via monetary policy speculation, and here we have one of the stingiest (dovish) pictures of the developed world. The ECB has committed to extreme easing and Germany yields (seen below in green) have collapsed in turn. Historically, the correlation between these two is exceptionally strong. 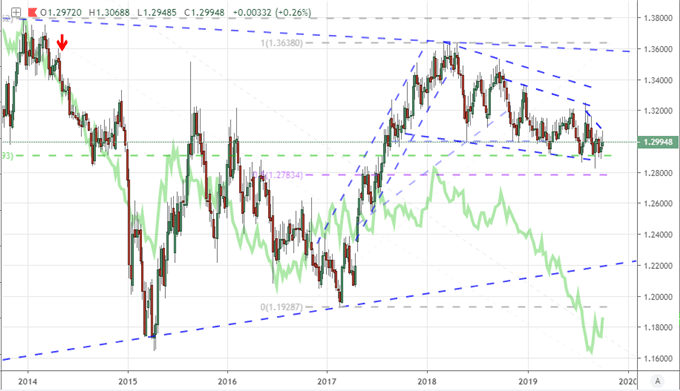 Looking to some of the more specific technical pairs among the Euro crosses, I think the EURJPY has just as remarkable a technical staging as EURUSD – if not more so. A channel has been tentatively forced for this pair as well, but that leaves us in direct contact with the confluence of a two-month range high, 100-day moving average and long-term range midpoint all at 120. If that breaks, I will be significantly more convinced. 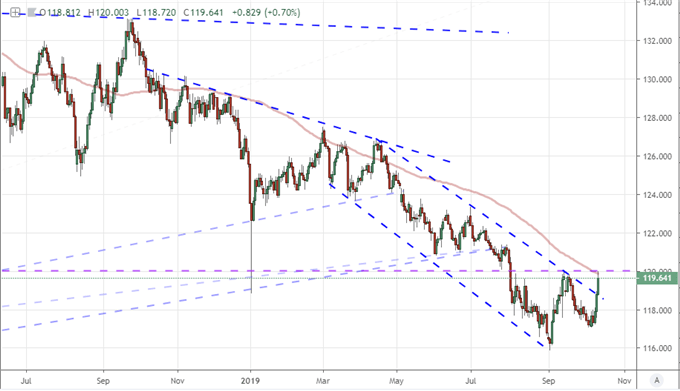 Another less typical cross with similar structure is EURCHF. You could argue that Yen and Franc are both havens and thereby bound to be correlated, but the Swiss National Bank is proactively interested in seeing this exchange rate rise – and has even taken steps to make it happen. We have a rougher range high with this pair and the same 100-day moving average still standing around 1.1020. Watch this pair especially should correlation across the crosses wane. 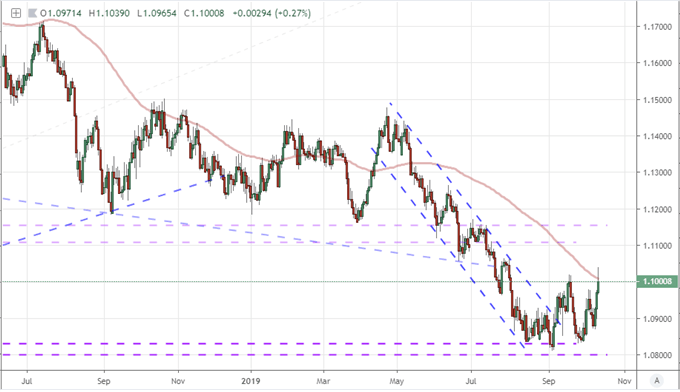 Through speculative positioning, there is definitely a skew towards the extreme to be found in retail interest. This group is more attracted to short-term setups, so range swings and short-lived breakouts are preferred scenarios. We could qualify EURUSD for either, it seems through IG client positioning that there was deep conviction still in the range. The net positioning figure flipped negative for the first time since the beginning of July as we crossed 1.1000. As for the medium-term, futures crowd, the lackluster momentum has kept them on the sidelines throughout the past year. 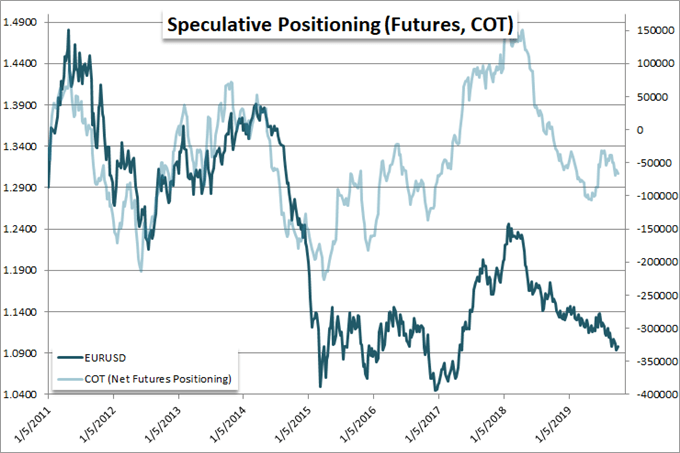 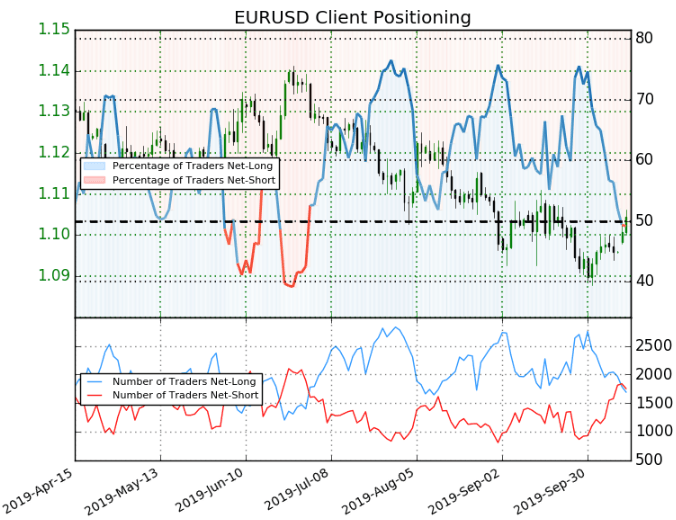