Build confidence in your own Australian Dollar trading strategy with the help of our free guide!

Last week, the pro-risk Australian Dollar received a fundamental lift from hopes of progress in US-China trade talks. Such key developments are critical to keeping in mind for the sentiment-linked Aussie when it comes to performing technical analysis. A sudden turnaround in trade talks, or a collapse in Brexit deal hopes, can have significant impact on this currency given the nature of such unpredictable outcomes.

The Australian Dollar aimed higher against the US Dollar over the past 5 trading days, extending its advance to test the falling trend line from July. This followed the emergence of a Morning Star bullish candlestick pattern on the daily AUD/USD chart below. Prices struggled to close above descending resistance, indicating hesitation from traders to commit.

As such, it will be key to watch in the week ahead how the Aussie behaves around this key trend line. I would argue that a daily close is needed above 0.6819 - former resistance from August – to confirm a breakout. That would then expose the September highs, which are a range between 0.6865 and 0.6895. Otherwise, AUD/USD could be looking at another retest of key support (0.6677 – 0.6717). 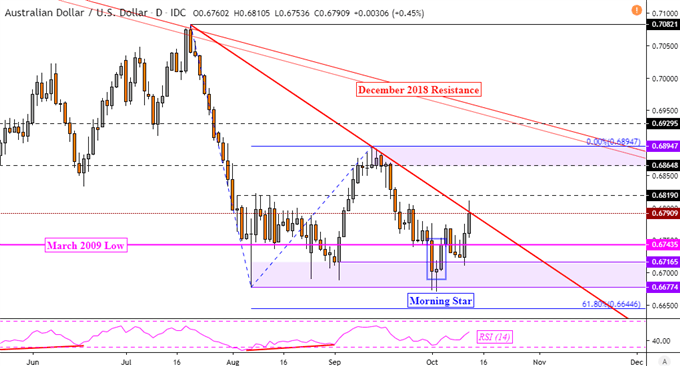 A similar development occurred when analyzing the Australian Dollar against the Japanese Yen. AUD/JPY struggled to close above key descending resistance from July. Prices also stalled just under the key psychological barrier between 73.93 and 74.47. Clearing this area would open the door to extending recent gains and perhaps then leading to a test of the next critical range (75.94 – 76.28).

Otherwise, turning lower places the focus on near-term rising support from late August. Getting there involves taking out former resistance which may act as support at 72.50. A daily close under 71.74, current October lows, then exposes the trough achieved in August around 70.66. As a reminder, the last time AUD/JPY reached this level was over 10 years ago. 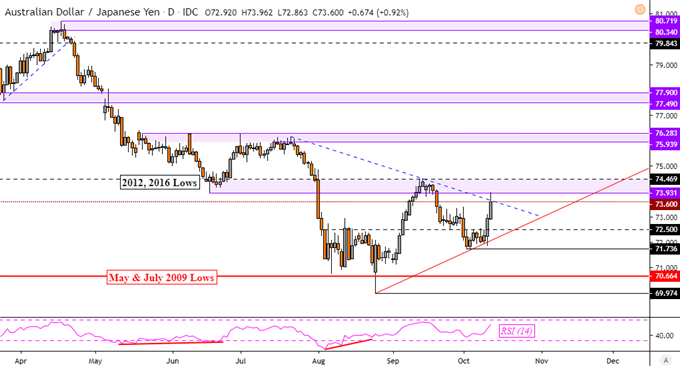 Against the British Pound however, the Australian Dollar fell short of much progress. Looking at GBP/AUD, the currency pair has been confining to a rising channel since the end of July. Last week, it closed at its highest since May, extending the cautious uptrend that has been occurring for about 3 months. This has brought prices closer to retesting May highs which are a range between 1.8817 and 1.8881.

The ceiling of the channel could pave the way for a turn lower in the days ahead, but past performance is not indicative of future results. Though it should be noted that GBP/AUD closed above the September highs. If there is a turn lower and this area holds, that could resume the dominant uptrend. Otherwise, closing under would expose the floor of the rising channel. 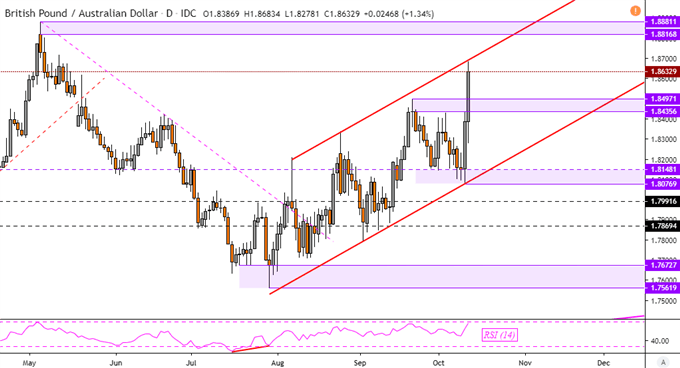