The Japanese Yen has caught a strong but predictable haven bid across the currency board as long-simmering trade worries boil over once again. China and the US seem at least as far apart as ever with tensions between the US and European Union also apparently on the rise.

These fundamentals are clearly driving the market now but the technical picture is also clearly brightening for bulls of the Japanese currency. USDJPY continues to flirt with a notable low on its daily chart. 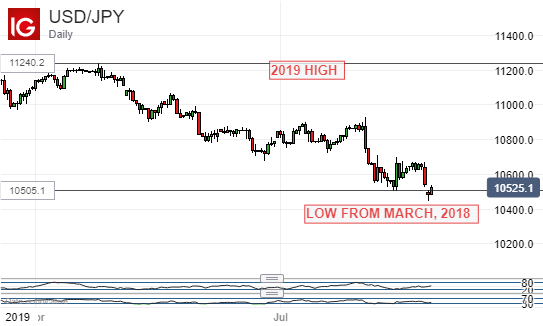 The 105.05 point had put a floor under the market until trade tensions reignited. This was the lowest level seen since March 2018 but it’s now being challenged. The daily chart doesn’t tell us much about what is likely to happen should it be conclusively broken but, with month end less than a week away it is instructive to switch to the monthly chart. 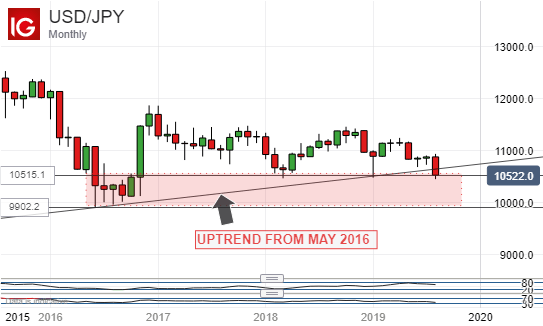 Here Dollar bulls’ jeopardy is made much clearer. The pair is very close now to breaking below an uptrend which had previously endured since May 2016. Should it do so then a broad band of support from way back then would come into play, with a base at 99.02, the intra-month low of June the same year.

Of course, trade-related risk appetite is a fickle thing and it would only take some more acommodtive sounding headlines from Washington and Beijing to flip recent market action all the way round again. Such things have been seen before. However, there is no sign of rapprochement yet, and the bias is clearly toward more Yen gains.

Dollar bulls may well have their work cut out to make good their most recent losses before month end. A foray back to resistance in the 106.48 region would be a sign that they had that sort of resolve. However, a close eye on that monthly-chart uptrend is probably what’s needed to trade this market now.

As might be expected in a closely correlated foreign exchange market, Yen strength can be seen right across the complex. However it seems particularly acute in the case of the Australian Dollar. Of course Australia has arguably as much interest in a trade settlement between China and the US as any third country, a fact which may account for some of the Aussie’s particular weakness.

AUDJPY has been below the monthly chart uptrend line from its post-crisis recovery in early 2009 since April of this year. Its retreat has accelerated in the past month however with the prospect of the complete retracement of those ten years of gains now very real.