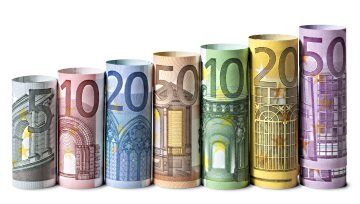 Euro Breakdown Potential Not as Extreme as EURUSD May Propose

When it comes to evaluating an FX benchmark like the Euro, there are different perspectives that we can use to evaluate the technical potential moving forward. If we were to base our outlook on the currency’s most liquid cross, EURUSD, there is the burden of considerable medium-term restraint against a driving trend. Alternatively, the cross is standing at the cusp of a multi-year low with the broader market seeking out such instances of tangible potential. Alternatively, if we were to look at the Euro’s position across its most of its other major counterpart, there is perhaps some short-term reversal potential evident; but not the powerful speculative draw of a bearish view beckoning the EURUSD forward.

The question I am evaluating is whether EURUSD were to slip below its early August low around 1.1025 ahead, would it jump start its own momentum for follow through. Most traders are principally concerned about whether the market will simply slide beneath the most immediate and prominent technical floor – and simply assume follow through will make an appearance. Yet, the limited breakdown in late July when 1.1110 gave way should recalibrate our attention. This pair has a very poor recent history for turning technical milestones into bouts of meaningful trend. Furthermore, if there isn’t the cumulative pressure of broad Euro selling deluge the currency, it is unlikely that we can readily override its recent restraint. Then again, if range conditions benefit from its underlying bias, traders can recalibrate and take advantage of the stubborn bias – though be mindful of assuming hard-fast technical bounds. Tails and false breaks are proving a feature of the landscape. 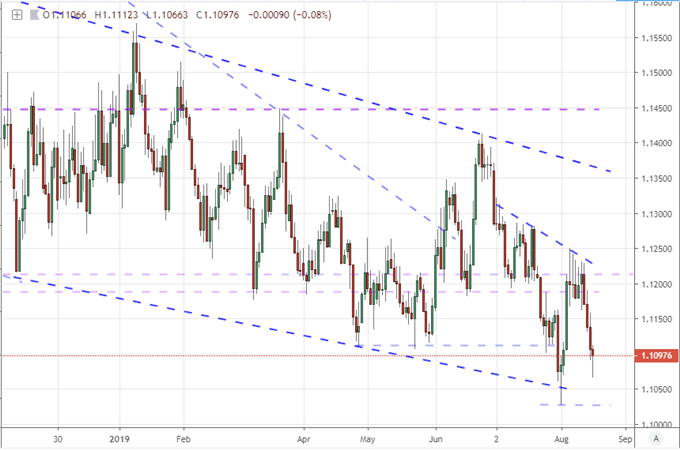 Adjusting our view of the EURUSD to a higher time frame better reflects our current position in core FX and the Euro itself. On the weekly or monthly chart, the chop of the past 15 months reinforces a difficulty in changing gears in both long-term direction or medium-term momentum. With fairly reliable channel boundaries, we find the 20-week average true range (ATR) as a priced-based activity measure lingering at its lowest level since the Summer Lull of 2014. Furthermore, the 24-week (6-month) historical range as a percentage of spot is negotiating the greatest restriction in movement in relatively the same period. These are both mean-reverting statistical features, but that doesn’t necessitate timing. In other words, this will break to bigger moves eventually, but it doesn’t have to be this week. We need a driver or systemic shift in the system. 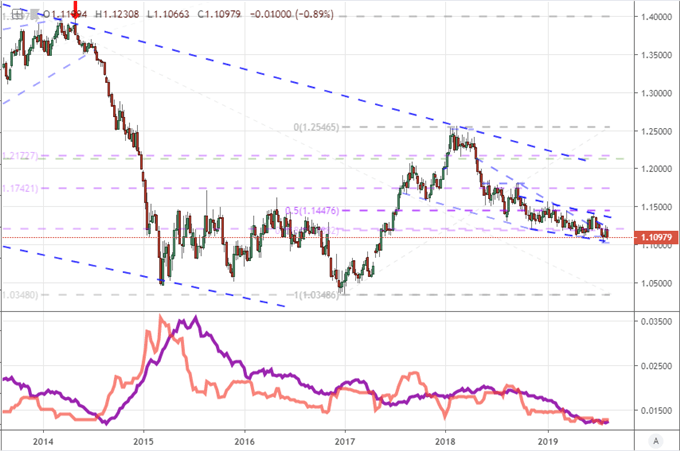 If we are looking for a charge that can shake a market from its complacency, there is no more effective means than full-tilt risk aversion – risk appetite simply doesn’t host the latent potential as its more unfavorable contrast. Yet, through the periods of volatility we have seen these past 18 months, this pair hasn’t been exactly clear on its standing for haven versus risky components. Trade wars is a catalyst of that theme which doesn’t give clear value to one over the other and the threat of recession is even between the two. Monetary policy is perhaps the thematic candidate, but rates decisions over three weeks away. In the meantime, charting that fundamental theme finds a clear departure in the correlation between EURUSD and the yield differentials between the 10-year German and US government bonds. 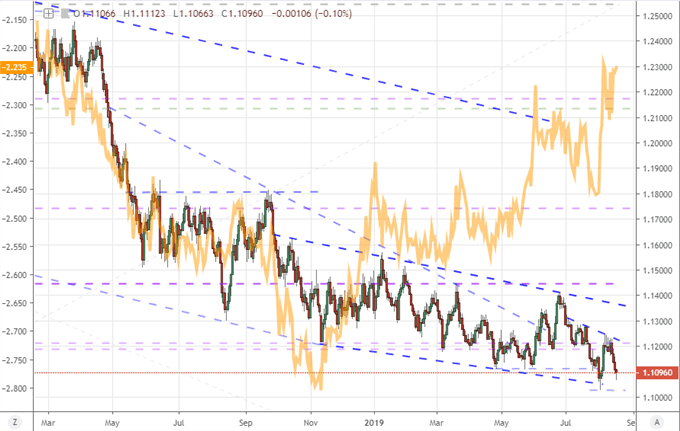 As global yields drop, the US has the most premium to burn which makes comparisons difficult to account for in convenient technical charts. If we take the US out of the equation, the weight on the Euro may be a little more transparent on the front of ‘returns’ via monetary policy. The German 10-year yield hit a record low just south of -0.70 percent this past week and the pressure comes to bare. If this trend continues, this could very well charge enough bearish fever to earn a EURUSD break, but trend remains a tall order. Then again, not all Euro crosses are looking at such ominous pictures.

Chart of EURUSD with German 10-Year Yield in Green (Daily) 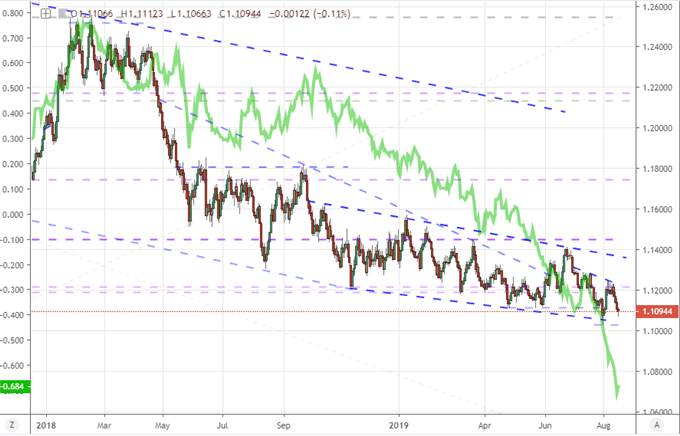 Taking a look at an equally-weighted measure of the Euro, the currency is still trading fairly richly relative to the past five years’ range, but we are not on the cusp of this frame’s technical boundary. This past week reflected the same remarkable reversal in course, with a heavier volatility, but the general support to further the correction of 2017’s progressive climb is still a way’s down. 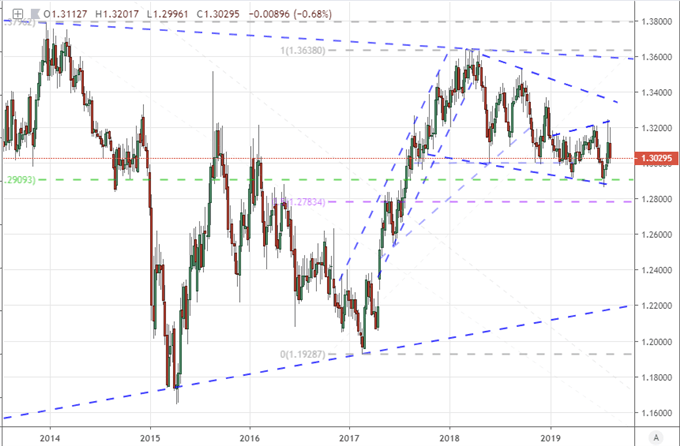 A good representation of this relative perspective among the major crosses is EURGBP. The pair has potential to continue its retreat following this past week’s slide – a bearish candle that ended a record breaking streak of 14 consecutive weeks advance. Having turned at the 2017 swing high, there is room to cover in a range swing before we find it back in a position where the bears much determine their serious conviction to sustain a true trend. That comes around 0.8500. 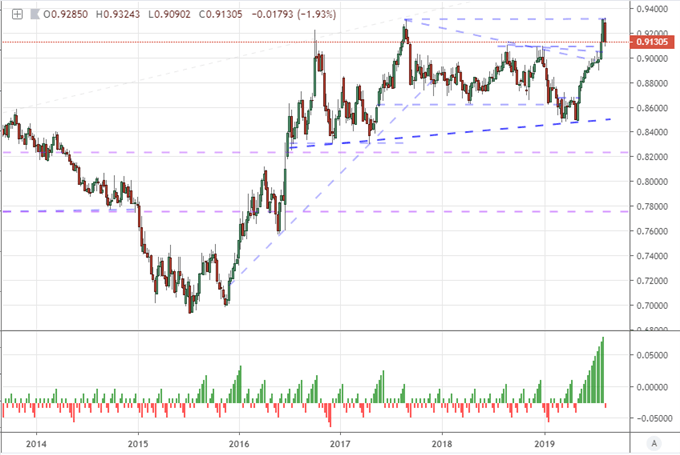 Another Euro cross of interest owing to its similar technical context of the Euro-at-large and market conditions in general is EURCAD. This is a less frequently referenced pair, but it is certainly liquid and its chart looks interesting. The retreat following a spike high in late July (leaving a large upper wick or ‘tail’) led to consolidation and the eventual break of recent range support around 1.6400. The full breadth of the range finds a floor all the way down around 1.6000. Meanwhile, despite the pull back, the 20-day rate of change is still stretched.

Chart of EURCAD and 20-Day Rate of Change (Daily) 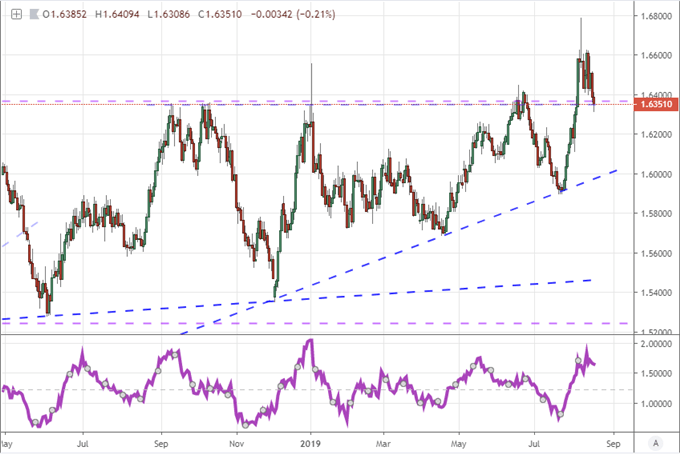 From a positioning perspective, the lack of breadth to the Euro’s swings and the restriction on outright trend has not been lost on speculators. From the large futures traders (encompassing groups like hedge funds), we find the net positioning station fairly close to even. While far off the relative lows trading for the underlying EURUSD compared to the historical dive in 2014 in particular, positioning seems to have found balance with over a year of throttling. The shorter-term views of the retail contingent are far more mindful of the range conditions. EURUSD positioning according to the IG Client Sentiment reading flips readily when the 200-300 pip range boundary comes into view. There is a notable exception though among the crosses below in the form of EURGBP. Retail traders have leaned against the pair’s incredible climb and it looks like one week of retreat will not lead to a massive profit taking as it sometimes does in such circumstances. 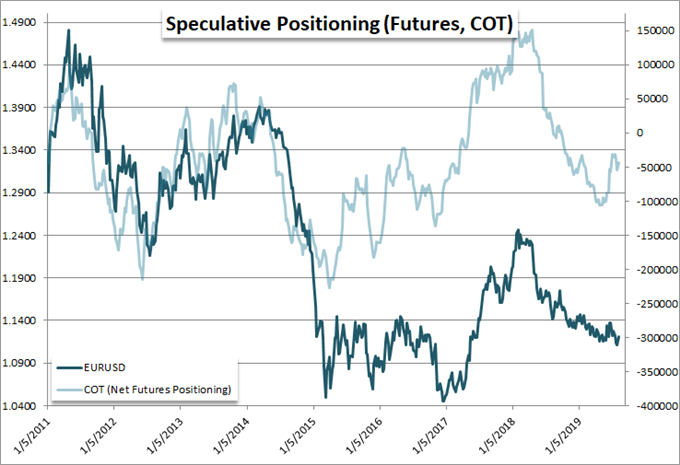 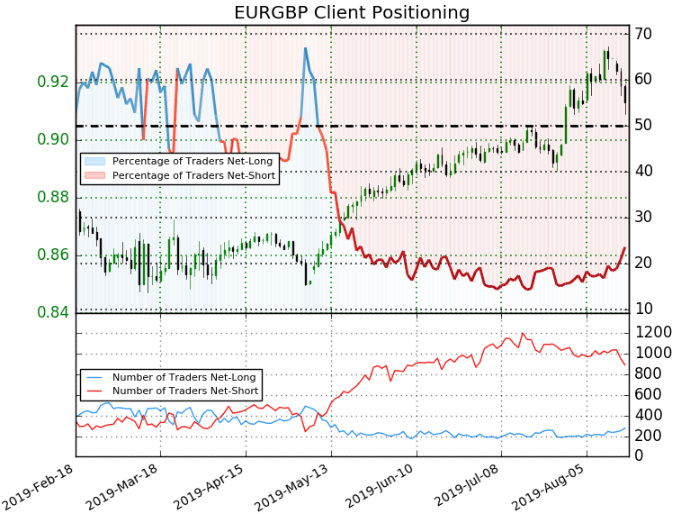