Weakness in the US Dollar, recently compounded by a softer-than-expected jobs report, has helped the British Pound advanced against the Greenback. Meanwhile, political conditions in the United Kingdom are clouding the fundamental outlook for Sterling. The Conservative leadership race beings this week to succeed Theresa May with Brexit on the sidelines.

Technically, where does this leave GBPUSD? On the daily chart below, the pair appears to be in the process of fulfilling a reversal in the aftermath of a Falling Wedge formation, typically seen as a bullish pattern. The breakout through descending resistance occurred after positive RSI divergence formed, which showed fading momentum to the downside.

Keep an eye on the psychological power between 1.2773 and 1.2798 next. If broken, this may set the stage for an extended turnaround in Pound Sterling. Near-term resistance after that appears to be at 1.2866. Otherwise, a resumption of the dominant downtrend since May opens the door to retesting support again at 1.2604 – 1.2582. 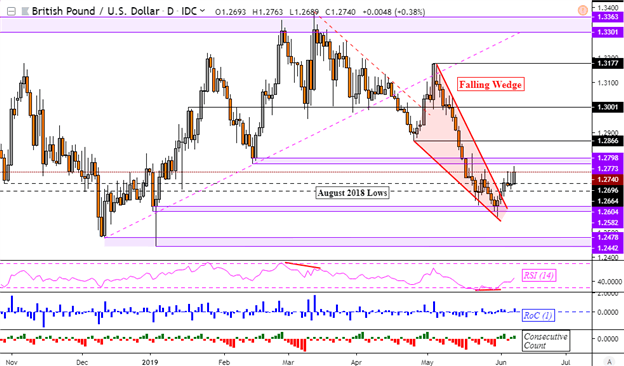 Against the Euro, the British Pound is struggling. After the Bullish Harami formed in early May, EURGBP proceeded to rally over 4.5%. But, the uptrend has slowed, guided higher by a rising support channel (parallel red lines below). On the 4-hour chart, near-term resistance was taken out at 0.8888, opening the door to testing the next psychological barrier between 0.8923 and 0.8953.

If that area is cleared, we could be looking at EURGBP testing the highs achieved back in January. But, negative RSI divergence persists and indicates fading upside momentum. Still, IG Client Sentiment offers a bullish-contrarian EURGBP trading bias. If there is a turn lower, keep an eye on the outer boundary of near-term support at 0.8811. If broken, losses may ensue. 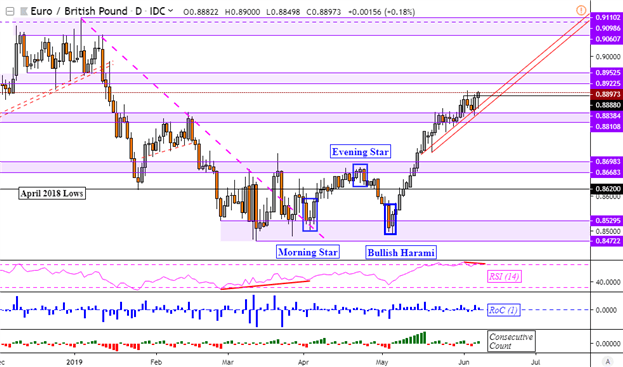 Meanwhile, the British Pound appears to be attempting to reverse the dominant downtrend against the Australian Dollar. This is because GBPAUD formed a Morning Star bullish reversal pattern this past week above key support (1.8100 – 1.8152). However, an attempt to clear the descending channel of resistance (pink parallel lines below) struggled.

Without confirmation of further closes to the upside, it is too early to say whether GBPAUD is ready to overturn declines seen since the Double Top preceded the 3.8%+ turn lower in early May. Clearing resistance would open the door to testing 1.8434. Otherwise, resuming the near-term downtrend opens the door to testing 1.7992.

For more updates on the British Pound, including on the fundamentals, you can follow me on twitter here @ddubrovskyFX. You may also join me each week on Wednesday’s at 00:00 GMT where I will be taking a look at what market positioning has to say about the prevailing trends in currencies, equities and commodities. 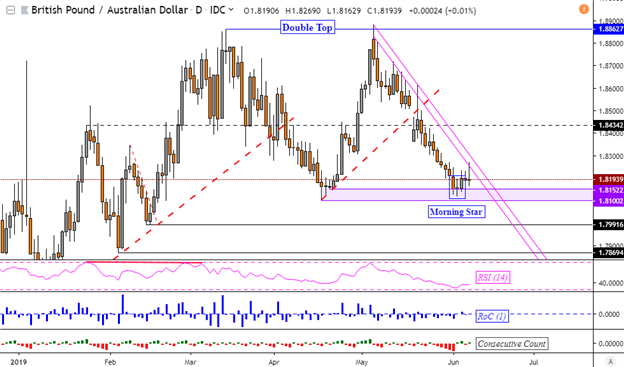