There is a remarkable contrast in nature behind the Dollar’s performance these past months. On the one hand, there have been bouts of sudden charge and fruitful technical progress, yet conviction has consistently evaporated before we can turn any meaningful breaks into a reliable trend. This restraint may very well be directionally-bound. In other words, the climb over the past year may hold the best probability for a sustained drive moving forward, but momentum may remain elusive until the bears wrest away the controls. It is important not to overlook the general trend underlying a market (bullish) but just as important for practical trading efforts is the nature of market activity that we need to navigate. At present, there isn’t a smooth trend to be found, there are technical levels aplenty but what boundaries we are coming upon are proving frustratingly porous for those keen for range trades. To adapt to these difficult conditions, we must embrace the volatility and be patient as the Greenback seeks out a guiding fundamental and technical light.

Taking stock of the levels the Dollar will face first thing next week, we should drop the time frame for the DXY down to the four-hour chart. At this granularity, we can see some of the larger levels that the market has developed over the past months and years while also highlight baselines for more recent momentum. Resistance is once again proving the more explicit boundary. With this past week’s reversal, the currency secured a triple top over the past month at roughly 98.30. As clean as this may look, it is worth noting that we also had a triple top at 97.70 from November to mid-April before we embarked on a short-lived bullish breakout.

As for the support we are now having to take more seriously, the more robust floors come into play further down. We start off the new week with a trendline support stretching back to March 20th swing low that has followed a few reversals on failed bearish moves to land at 97.75. The 20-day moving average also happens to fall at this same level as of Friday’s close. Following Friday’s tumble – the sharpest single day loss for the DXY since that same March 20th performance – we could find some carry over to bring further levels of support into view. I don’t put much stock into a general zone of support/resistance these past six months around 97.50/70 and instead find more weight in 97.05 where the midpoint of the March 20th to May 23rd climb stands. To see the more hefty levels beyond this, we need to raise the time frame of the charts. 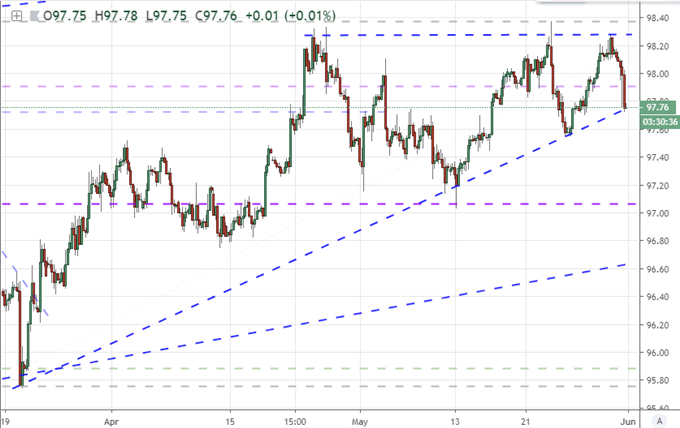 Looking even further out for support, the floor of a rising trend channel that has defined the Dollar’s past 12 months can be seen to coincide with the 200-day moving average around the 96.50 area (the MA is a little lower and trendline a little higher). To find a next level, comparably-weighted resistance beyond the aforementioned triple top requires more than two years’ worth of historical price action. That said 99.50 was support for a head-and-shoulders (H&S) reversal pattern back in the transition from 2016/2017, 100.60 was a double top high back in 2015 and 103.80 was the 15-year high set at the beginning of 2017. Once again, considering the proximate price boundaries and the subsequent activity limitations, these nearby support and resistance levels require the steadfast decline in volatility to hold. The 20-day ATR (average true range) is still hovering at levels last seen back in Summer 2014. If volatility were to ‘normalize’, it could prove a technical break a broader effort to develop trend. 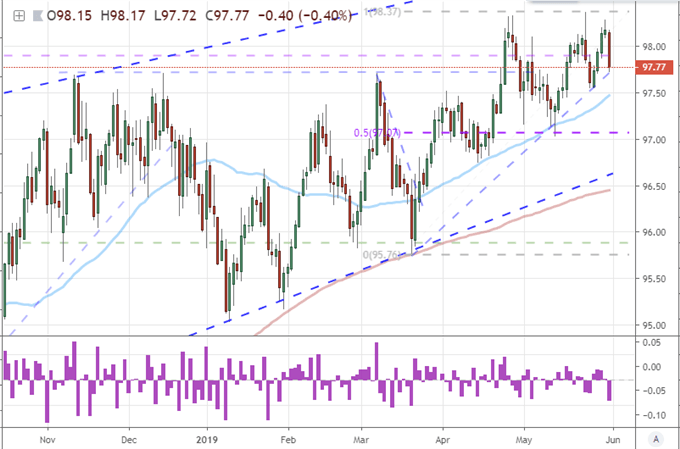 While it is worth keeping the objective view of the Dollar’s performance that technicals afford us, we should also monitor motivation via some contextual fundamental roles that can be readily represented in charts. An appetite for a safe haven would be one of the more likely sources of volatility in the foreseeable future, but that doesn’t necessarily mean the Greenback will be able to play its traditional role. Consider the relationship between the market’s favorite volatility/risk indicator – the S&P 500-based VIX – and the currency this past year. The currency managed to drift higher through the slow first quarterly climb in risk assets and the slide in volatility readings. If we see another surge in volatility as we did in the fourth quarter, there is an unfavorable deviation from traditional performance that could once again rear a confusing head. 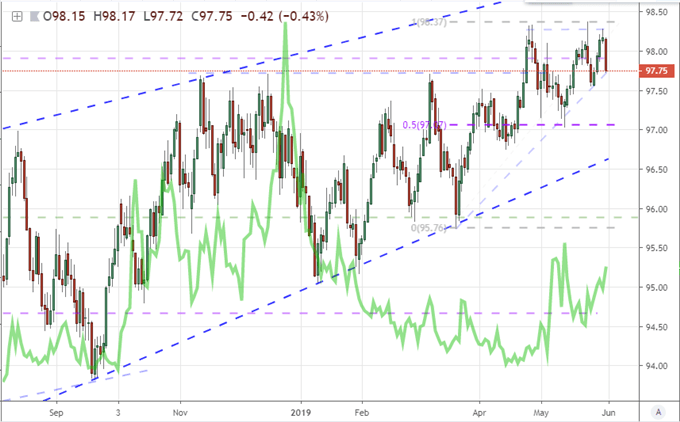 To be fair, there is a better relationship in risk measures and Dollar performance when we look at tremors specifically tailored to the FX market. This has a distinct drop in April that is the product of the GBPUSD’s leg of this equally-weighted measure dropping after the Brexit extension. Nevertheless, the controlled swings in the activity gauge seem to match the restricted performance of the currency itself. Yet, there remains an unreliable correlation for day-to-day or week-to-week intent. 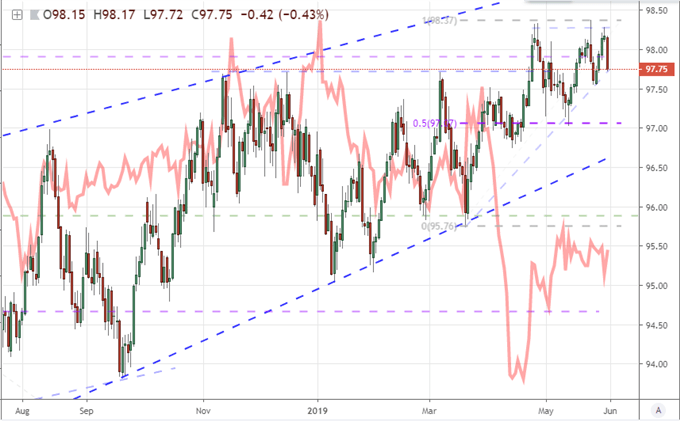 For those that are witnessing the faltering safe haven status of the Dollar, there is an argument that can be made that perhaps the same currency is now a risk-favorite itself owing to its superior interest rate stance. It is in other words, the best ‘dividend yielding’ currency. While there is some truth to this role, it is also undermined by the fact that interest rates for the Fed have plummeted recently. Below is the implied yield through the end of 2020 derived from Fed Funds futures. This suggests the market expects two or three 25 basis point rate cuts over that period which would necessitate some premium erosion from the Greenback back to the September peak. Clearly that is not a driving force. 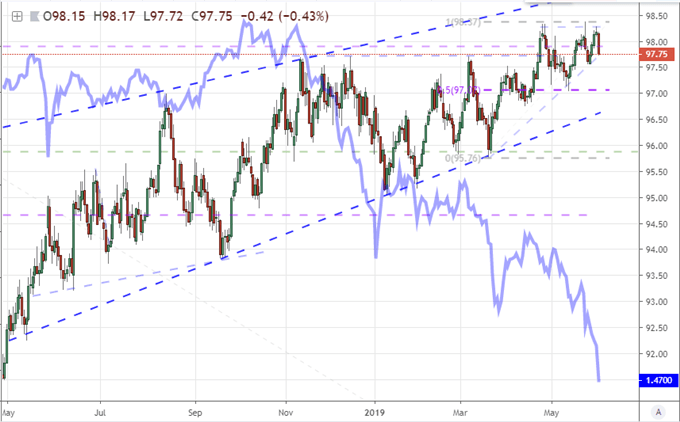 Among the majors, EURUSD and GBPUSD are very attractive in purely technical perspective. The former is working on a massive, multi-month descending wedge that will eventually come to an end. That said, patience is absolutely essential here, and that doesn’t really offer near-term opportunities. Nevertheless, keep tabs. As for GBPUSD, the Sterling has as much to do with the direction of that pair as the Dollar. That isn’t necessarily detrimental, but that bolsters the erraticism behind the pair as Brexit headlines create a very unreliable market backdrop. 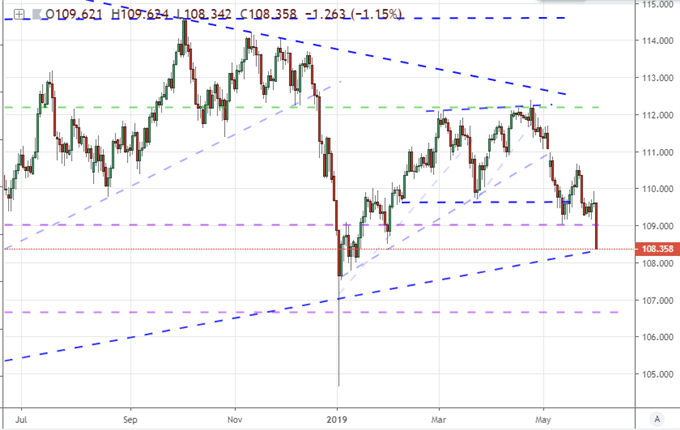 While most people seek out breakouts and trends unconsciously pining after the allure of sheer volatility, the nature of the Dollar’s struggles means pairs that are showing restraint and obeying technical bounds more readily may be more appropriate. USDCAD is perhaps the best example of a range/congestion-directed major as its own ATR continues to plunge as well. If the Dollar does make for a serious and lasting break, there will be plenty of technical cue to confirm that on this pair. 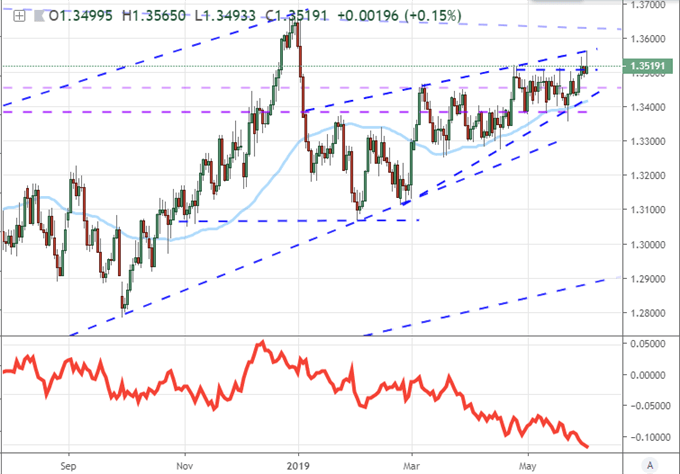 For net speculative positioning, the large interests measured through futures offers a greater sense of indecision and a drop back in participation. In the COT’s aggregate Dollar figures, we continue to see swings in speculative bearing that are clearly frustrated by the lack of a committed price run. Short-term speculative efforts in contrast find a host of interesting readings. Where ranges are prominent, traders are playing off the technical boundaries. On the few progressive runs, we are left with amplified reversal calls. I’m partial to USDJPY which has seen a complete flush of short interest while long efforts are trying to push the effort again and again. 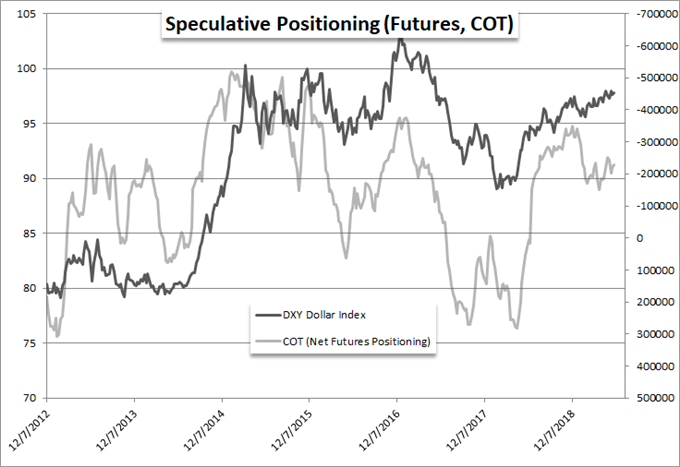 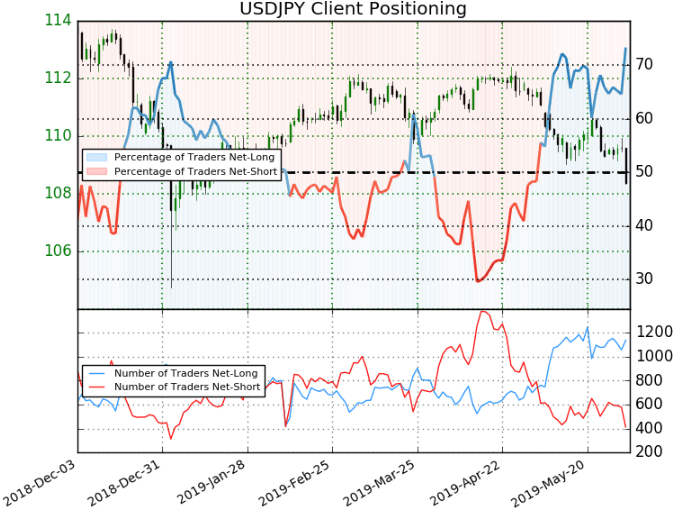 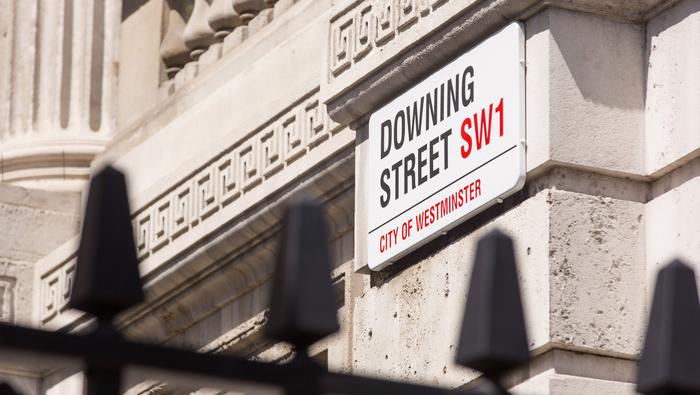