The British Pound continues to give back the advance from earlier this year amid little to no signs of a Brexit deal, but the Bank of England (BoE) interest rate decision may curb the recent decline in GBP/USD should the central bank show a greater willingness to further embark on its hiking-cycle.

The British Pound remains battered as Prime Minister Theresa Maystruggles to reach an agreement with the Labour Party, and the push to withdraw from the European Union (EU) may continue to produce unintended consequences as Scotland’s First Minister, Nicola Sturgeon,plans to hold another referendum by 2021.

The Brexit negotiations should keep the BoE on the sidelines as ‘the economic outlook will continue to depend significantly on the nature and timing of EU withdrawal,’ and the Monetary Policy Committee (MPC) may largely endorse a wait-and-see approach at the next meeting on May 2 as officials warn that ‘the news in economic data has been mixed.’

However, updates to the quarterly inflation report (QIR) may indicate that the BoE remains on track to further normalize monetary policy as ‘the Committee judges that, were the economy to develop broadly in line with its Inflation Report projections, an ongoing tightening of monetary policy over the forecast period, at a gradual pace and to a limited extent, would be appropriate to return inflation sustainably to the 2% target at a conventional horizon.’

In turn, more of the same from Governor Mark Carney & Co. may shore up the British Pound as the MPC keeps the door open to implement higher interest rates, but the recent pickup in GBP/USD volatility has shaken up market participation as retail sentiment remains stretched. 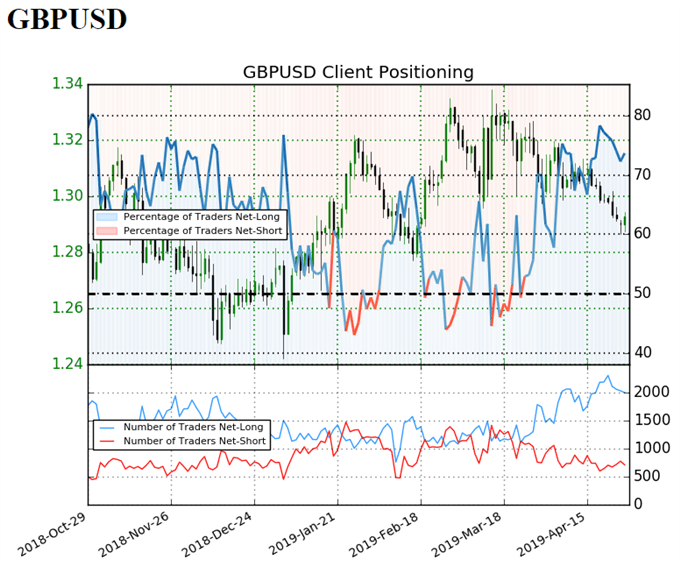 The IG Client Sentiment Report shows 73.7%of traders are net-long GBP/USD compared to 65.8% at the end of March, with the ratio of traders long to short at 2.8 to 1. Keep in mind, traders have remained net-long since March 26 when GBP/USD traded near 1.3210 region even though price has moved 2.1% lower since then.

The number of traders net-long is 5.0% lower than yesterday and 9.7% lower from last week, while the number of traders net-short is 4.4% lower than yesterday and 9.8% higher from last week. Profit-taking behavior may explain the decline in net-short interest as GBP/USD bounces back from the monthly-low (1.2866), but the extreme reading in net-long position suggests the retail crowd is still attempting to fade the recent decline in the pound-dollar exchange rate as its sits near the highest reading for 2019.

The ongoing tilted in retail interest offers a contrarian view to crowd sentiment especially as GBP/USD snaps the bullish trend from late-2018, with the Relative Strength Index (RSI) highlighting a similar dynamic, but fresh rhetoric coming out of the BoE may impact the near-term outlook for the pound-dollar exchange rate as the central bank delivers its updated quarter inflation report. 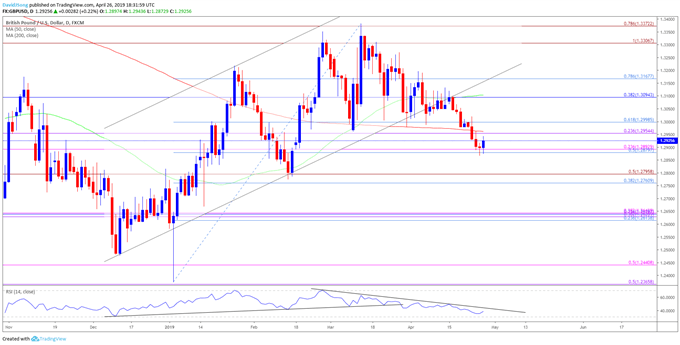 Bear in mind that the broader outlook for GBP/USD is no longer bullish as the exchange rate snaps the upward trend from late last year after failing to close above the Fibonacci overlap around 1.3310 (100% expansion) to 1.3370 (78.6% expansion).