You are in luck, DailyFX’s Q2 2019 Crude Oil Forecast was recently released

This weekly chart is the most worrisome to me when looking at crude oil’s prospects. You can see the weekly candle ran out of steam, as evidenced by the tall upside wick into the Andrew’s Pitchfork median line, weekly Ichimoku Cloud, and closing in on the 10-yr falling trendline.

Key short-term support on the weekly WTI crude oil chart with Ichimoku applied is near $60/bbl.

The key development that brings caution to the bullish crude trader, though not enough to initiate a short, but rather, favor a small pullback within the uptrend is the MACD (5,35,5) momentum resistance. The steep slope into momentum resistance is concerning, but without a move below $62.4 and $58/bbl, the odds to me tilt to further gains, which will soon be explained.

The labels on the chart are presumed Elliott Wave labels. Elliott Wave is excellent for putting the market into context, but like everything, it lacks certainty. However, the bounce in early 2019 was perceived at the beginning of this year to be a correction to the Q4 drop, which would argue for a broader drop developing similar to H2 2008, H2 2014, or Q4 2018 per Elliott.

Short(er)-term charts are a thing of beauty. They allow you to drill down on the details witnessed in the big pictures above.

The four-hour chart below shows that price has dipped below the four-hour cloud alongside momentum (bright green line, or Ichimoku lagging line), which would indicator broader short-term bearish momentum.

The highlighted levels here are $62.4/bbl and $58/bbl, which I’ve shown above, but here you can see these levels also align with prior corrections that preceded trend continuation. The next move to watch is a move either toward $58/bbl or a recovery.

A break below $58, which would be a ~15% drop from the current-cycle high, would start to raise questions about a broader shift, and fundamentals like business cycle turning, positioning, and physical tightening will be looked to confirm the view from neutral to possibly bearish.

An increasingly strong US Dollar, which has recently traded to the highest level since summer 2017 would also hurt the prospects for further crude oil gains. 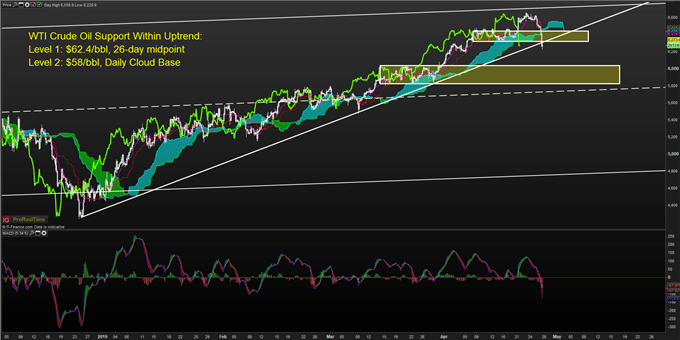 The chart below shows positioning from institutions (non-commercials) per the CFTC data. Notice the difference between the top in early October and the current move?

In October, the positions or longs from institutions had been steadily falling bringing about massive divergence. Currently, bullish positioning continues to build, while at the same time, though not shown, options data doesn’t have traders buying protection of sharp drops.

With institutions still buying, it’s tough for me to get bearish. The end of week price drop may be seen as an opportunity to re-load for any that have recently taken profits. 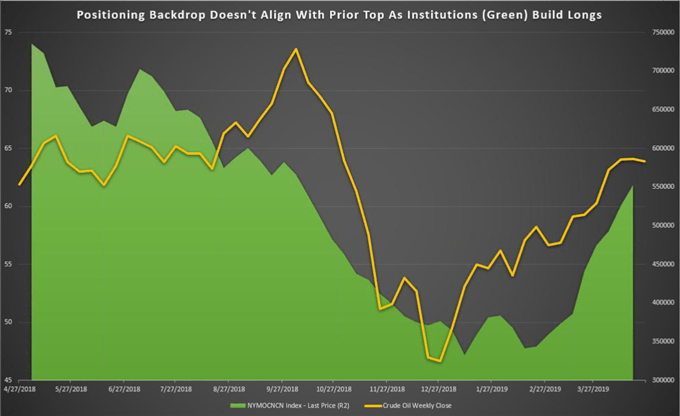 Lastly, calendar spreads continue to show tightness. What surprises me, is that the market is pricing a higher premium now for a forward month-contract compared to a later-dated contract (indicating tightness) than they were in October when Crude traded to $76.80.

The environment has changed since then, but this shows me that the pricing is not as unfounded today as it may have been before the sharp macro-correction that was witnessed in Q4 2018. 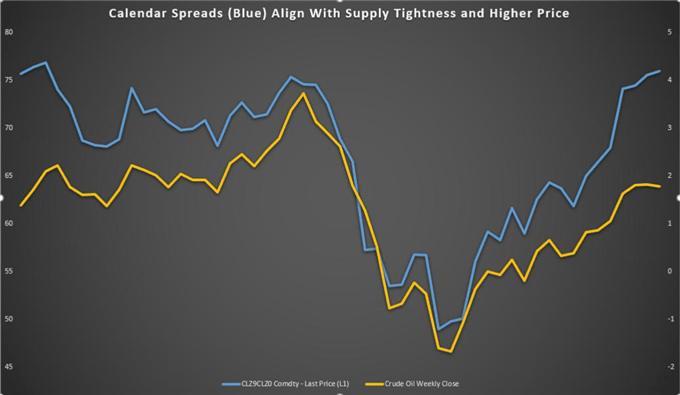