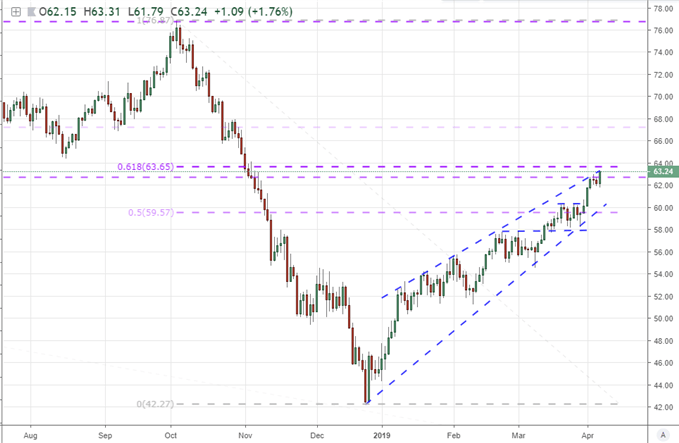 The first week of the second quarter offered a very favorable wind for crude. Starting with this past Monday’s lurch higher – earning a decisive break above 60.25 on the biggest single-day rally in two-and-a-half months – the period would eventually offer 5.2 percent advance that clears out further technical levels that different traders would assign different weighting. There was some historical precedence in the 63 level that we cleared on Friday as the 61.8% Fibonacci retracement of the historic range over the past three-plus decades. But how many people are truly monitoring that level? The answer to that question is important in establishing how much speculative charge we can muster from merely passing through a level rather than finding some fundamental source of demand. Looking further above, the 61.8% retracement of the October to November slump stands at 63.65 and the 64.50 area is roughly the support established through the past summer. I don’t assign much weight to either milestone. Instead, I’m more concerned with the pacing in momentum and the external motivations of risk appetite.

Zooming out to take stock of momentum behind this commodity, we find that all of 2019 is essentially a ‘recovery’ phase to a much more intense tumble through the fourth quarter of the previous year. Nevertheless, that rebound has proven consistent and productive. Thirteen of the last nineteen weeks have been positive for the market and that includes the five consecutive weeks of advance that concluded this Friday. That matches the longest series back to the first two weeks of 2018 and we haven’t had a six week or greater climb since March 2016. That is a remarkable picture and looks very similar in structure to what we saw in early 2016: the initial phase of a recovery effort. That said, we are not mounting a recovery from a multi-year bear phase.

Chart of an US Crude Oil and Consecutive Candles (1-Week) 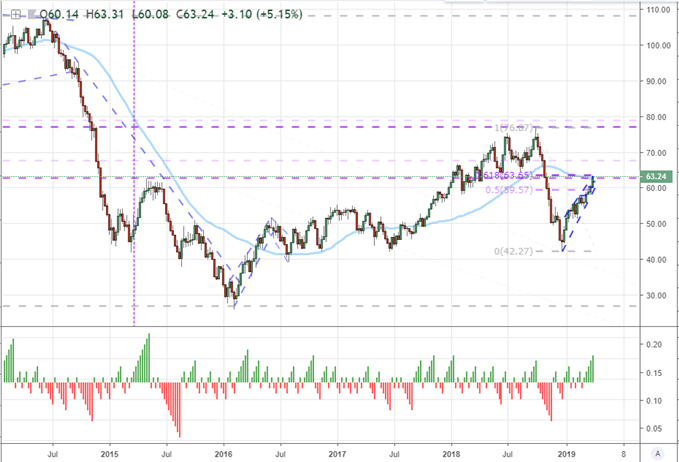 Where momentum on the higher time frame is uneven, the market continues to earn short-term victories for the bulls which is proving valuable as the progress clearly comes in stage. In the four-hour chart below, you can see that much of the advance is being made in short but intense phases around technical breaks. This past week, we were developing a symmetrical wedge pattern – or a bullish pennant – which secured its break before the close above the top of the short-term congestion portion which happened to coincide with the longer-term Fibonacci level reflected alone. Short of an external tidal wave of speculative interest that lifts of crushes this market along with many others, we are likely to see considerable start-and-stop activity around notable levels. 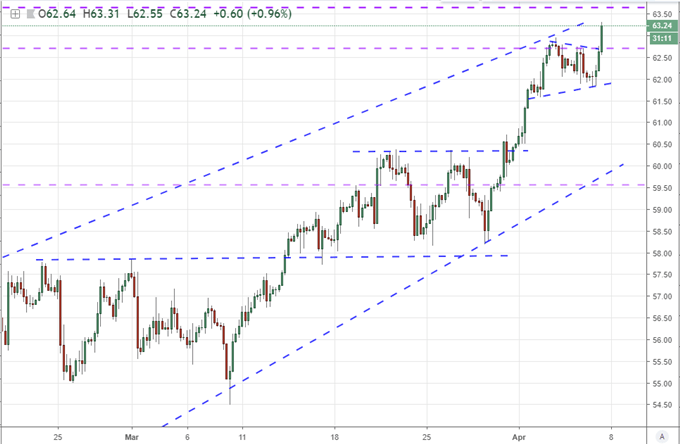 As you monitor oil’s progress, keep tabs on its pacing. It is natural to see activity – both realized and expected – to settle when a market with a positive correlation to risk trends advances. You can see below the 20-day ATR (in red) which reflects volatility in actual price action and the CBOE’s oil volatility index (in green) which derives anticipation through options are both dropping to quiet levels. This is not unique to crude by any stretch, but it is very often the foundation for staging a dramatic reversal in activity levels. It reflects the lull and lack of preparation that builds into a trend. In practical terms, it means that further climb will more likely be throttled relative to the potential intensity of any reversal that drive us back below 60 – the channel support that could seriously undermine intention. 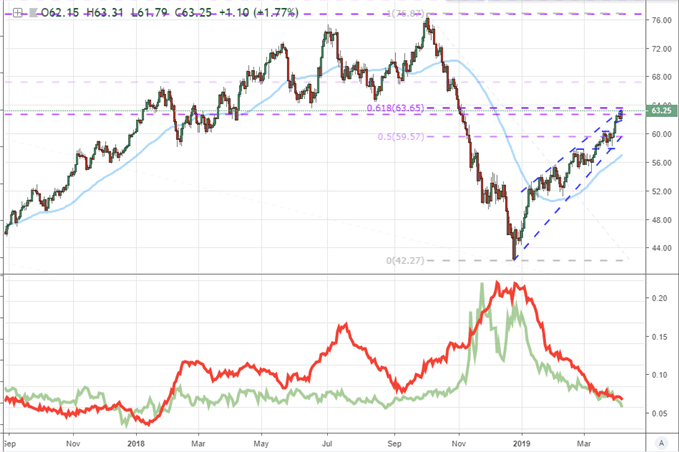 Not shown in the charts here, we are certainly starting to see some stretch to raise contrarian concerns. Alongside momentum flagging, we have measures like the RSI showing such consistency has pushed us into an oversold position. That doesn’t suggest we are going to immediately reverse course, but this concern will float in the background. Meanwhile, we need to also keep tabs on some of the external influences in the market. Below you can see each of the times US President Donald Trump has weighed in on the level of the commodity (stating it is too high) via Twitter. His track record for turn the market is not strong, however, it can generate volatility. And if the market is already starting to waver, volatility can sometimes prove to match that starts the fire. 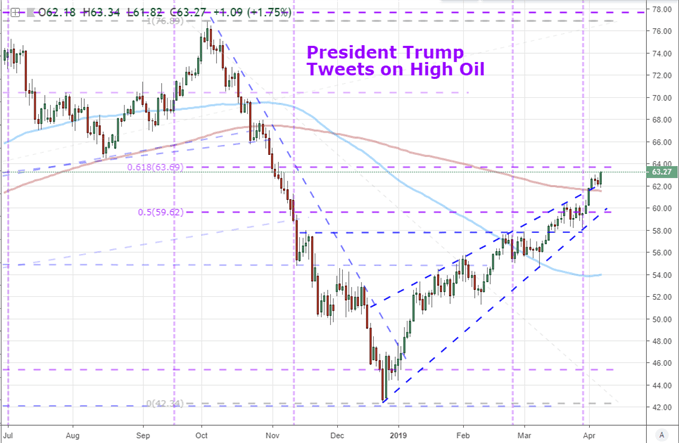 A much more systemically-important influence for crude oil is its general connection to ‘risk trends’. For those monitoring fundamental influences, the headlines from the US President and OPEC are of questionable effect. Yet, when there is a broad rise in anything with a speculative lean to it – like the S&P 500 or other US equity index – we find crude is usually following along. Below, the correlation between the S&P 500 and Oil can be seen in the overlaid charts, but the consistency is best appreciated in the statistical reading. The rolling 20-day correlation is extraordinarily high and has remained that way throughout the ‘recovery’ phase in 2019. 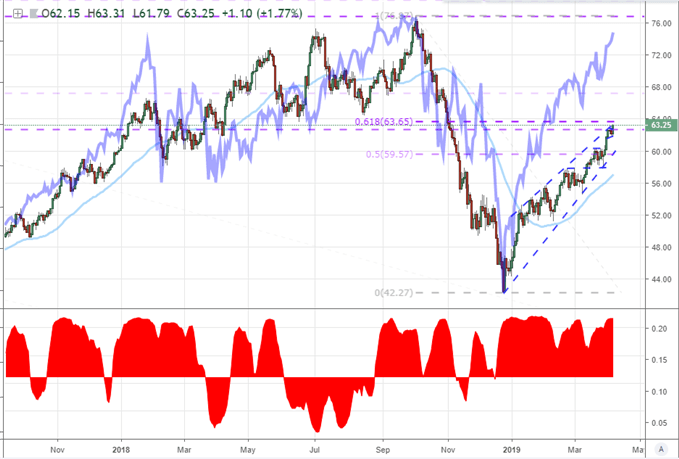 In determining continuation or reversal, one of the most prescient aspect to the market is positioning. Looking to the most recent CFTC Commitment of Traders’ figures, net speculative futures traders continue to drive into the recovery effort with seven consecutive weeks in which the crowd has increased its net long position. There is still considerable ways to go before we return to the record highs in long exposure from last year, but that is unlikely to occur. The 2018 peak in net positioning contrasted dramatically with the relative level of the underlying market. That recognition will likely play a roll in commitment moving forward. As for short-term interests, the retail side (via CFDs) is increasingly fighting the trend. The build up in short total orders is not climbing aggressively, but the net short-view is increasing as participation form the long side dries up. Retail traders tend to do better in range/congestion markets and fight aggressively the establishment of trends. 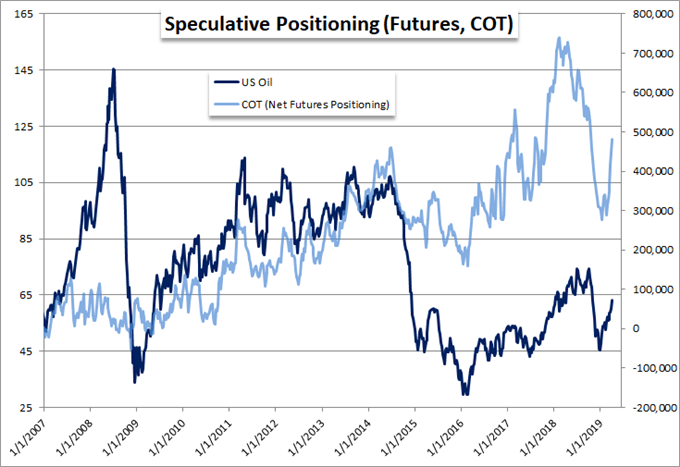 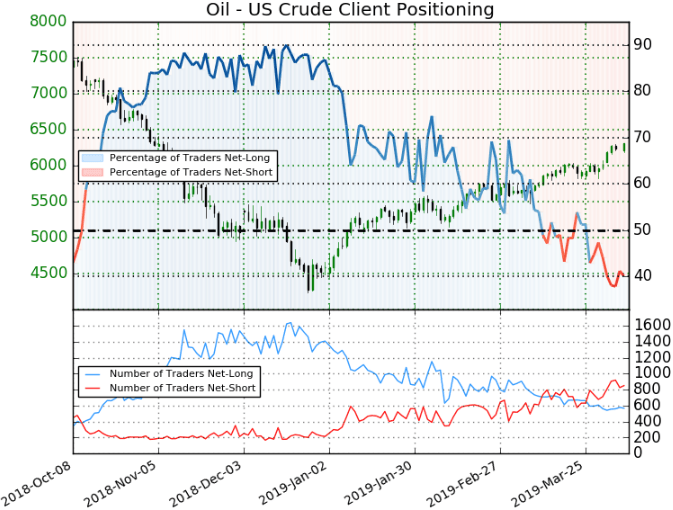 US Dollar Q3 2022 Technical Forecast: Does the Bull Stampede Have More Room to Roam?