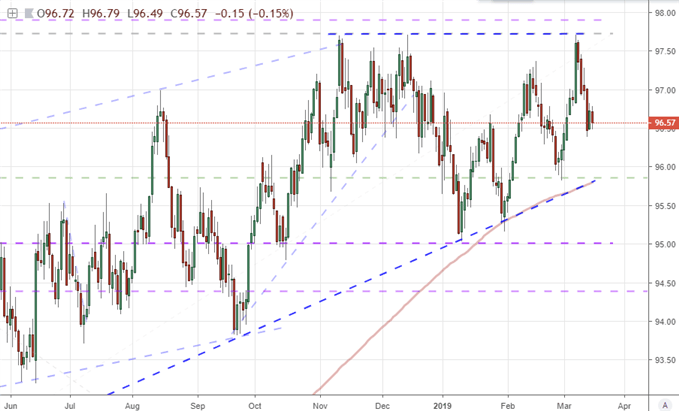 On a strictly statistical basis, the Dollar closed out a particularly painful week. Yet, the context of its broader technical patterns and environment suggests we are not yet in a position to expect the revival of a genuine trend. Extending its impressively precise range reversal from 97.75, the DXY dove back into the middle of its congestion pattern stretching all the way down to support defined by the confluence of the trendline reaching back to May and the 200-day simple moving average now at 95.80. From Friday close to Friday close, the index dropped approximately 0.8 percent for the worst slide since the week of August the 20th. Before that, we don’t have a comparable performance until February of last year – when the currency was searching out the bottom of its 14-month bear trend. This move promises little for the development of a new phase beyond the established range. On the other hand, volatility applied to tightly bound spaces runs a greater and greater risk of prompting a breakout – especially as key events like this coming week’s FOMC rate decision pop up.

For the big picture overview of the Dollar, we can see the extremes in the dwindling space found from the rising triangle reaching back to the early May lows. The rolling 60-day historical range on the index as a percentage of spot price (seen below) is the most restrictive trading we have seen from the currency since the Summer of 2014 – a period synonymous with extreme inactivity. So long as this technical pattern continues to close, the reading will continue to drop towards unprecedented levels. The question to follow this formation is whether a simple break will immediately signal a categorical shift into a ‘breakout’ environment. General market conditions suggest a mere technical development alone – even from a currency of this heft – would not earn a transition. However, if the break happens alongside or is prompted by a groundswell of speculative motivation, we could jump to a trend fairly quickly. And ‘when’ (not ‘if’) that happens, I feel the bearish case has greater weight. 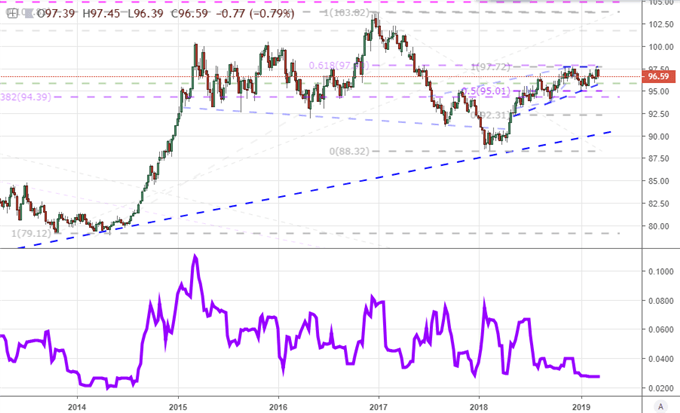 As we keep tabs on the 97.75 to 95.80 range that currently reflects the currency’s principal borders, we must keep very close observation of volatility – both expected and historical. We see both measures of activity below. The red line is the 20-day ATR or average true range. While we are still moving in generally the same range as previous months, the day-to-day activity has constricted. While this can remain the case for an extended period time, there is certainly a contrarian element to the reading as we confer to the higher time frames, the historical reference and how narrow the technical bounds are at present. In terms of expected volatility, I have aggregated the CBOE’s volatility measures derived from EURUSD, USDJPY and GBPUSD – the three most liquid pairs. While this reading has also slid from peaks in November and January, it draws a notable contrast to the ‘actual’ volatility measure. 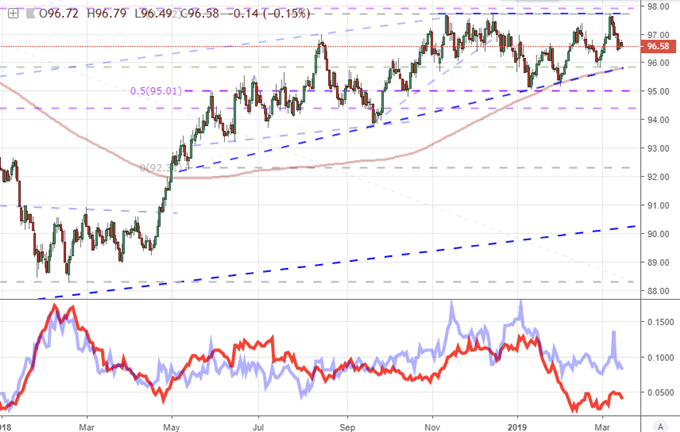 Looking to the key, individual currency pairs, the EURUSD draws an even more dramatic picture than the DXY itself – which is ironic as this pair is the primary component of the index. We could look at the daily chart, but we see much the same and don’t see the context of where the market is likely to move when it does eventually clear its immediate hurdles. To the downside we have 1.1200 support as a range floor and confluence of Fibonacci levels. A bearish break has plenty of subsequent, interim levels to question momentum at along the way; but ultimately the 1.0350 swing low from late 2016 is the far target. A resolution to the upside would be far more likely to indulge the start-and-stop progress. I would expect second guessing of commitment to trend every 100 pips or so. 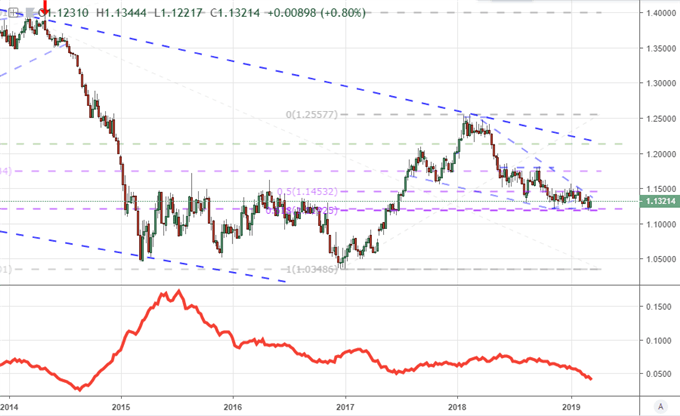 When reference the stoic rise of the Dollar, USDJPY is one of the pairs where the single currency is making some of the most remarkable progress. The rising trend channel for the key pair since the Flash Crash to start the year has covered 400 pips from rational lows and 700 pips when we incorporate the extreme volatility on January 3rd. As impressive as the channel may be, it is not offering much in the way of slope – average daily advance. There is little doubt that a 112 break would be bullish progress but it wouldn’t ignite a dramatic climb. A break below 111 on the other hand could prompt deeper reflection, but I would still place greater emphasis on EURUSD clearing 1.1500 if I were looking for a Dollar cue. 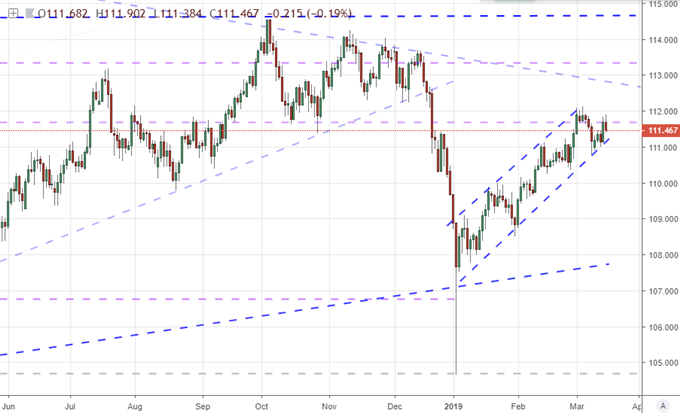 Meanwhile, GBPUSD has offered some of the most remarkable trading amongst the majors stretching back over the weeks and even months. Yet, what volatility we have seen from Cable is heavily dependent upon the Sterling rather than the Dollar’s own contributions to activity. Brexit headlines have earned more than a few remarkable swings and was clearly the spark for pair’s biggest single-day rally since April 2017 this past Wednesday. It is possible that further updates on this theme next week can spark a breakout and perhaps even a trend, but extrapolating a lasting Dollar run from GBPUSD’s clearance would be a serious stretch. 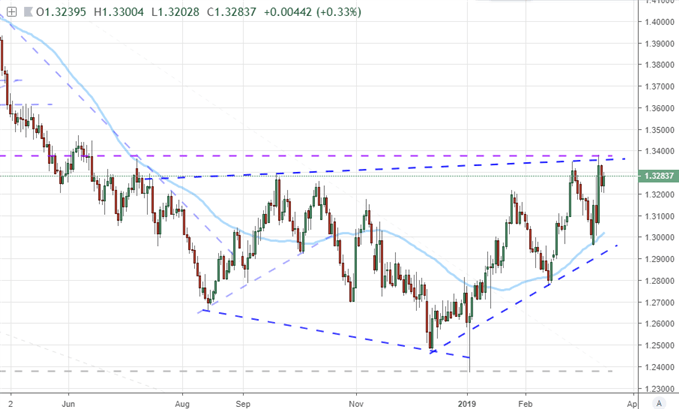 As for speculative positioning to fuel a meaningful move ahead, the net speculative futures standing from the COT suggests the currency is not stretched to the same extreme as we would draw from the DXY’s test and rejection at 97.75. That said, exposure is still stretched in favor of the bullish view and adding to that position will likely take more significant encouragement whereas a reversal can likely be prompted more readily as traders rush to rebalance. From the retail side, FX traders have flipped negative EURUSD for the first time since early February. The short-term perspective of this crowd is clear, as is their observation of the explicit levels on the exchange rate. Expect this group to continue to play the range and meet serious surprise when there is an eventual break. 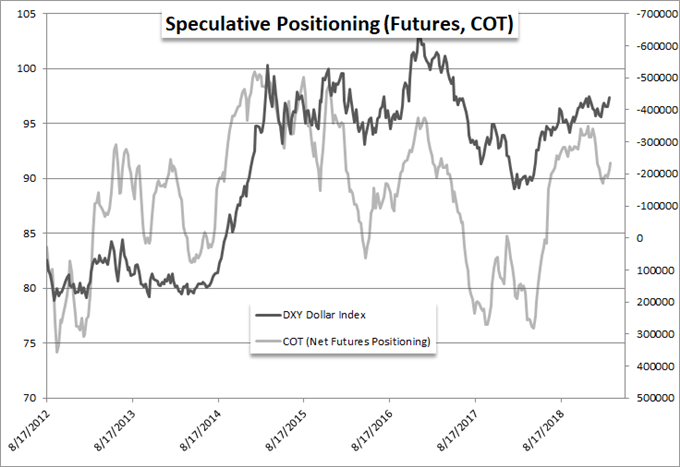 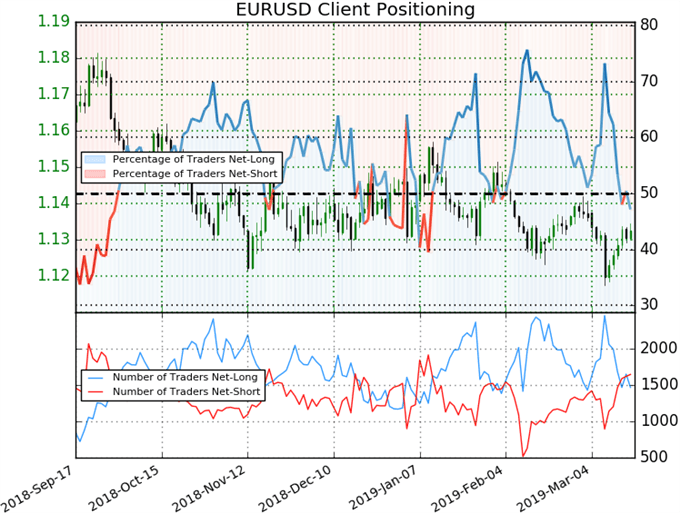