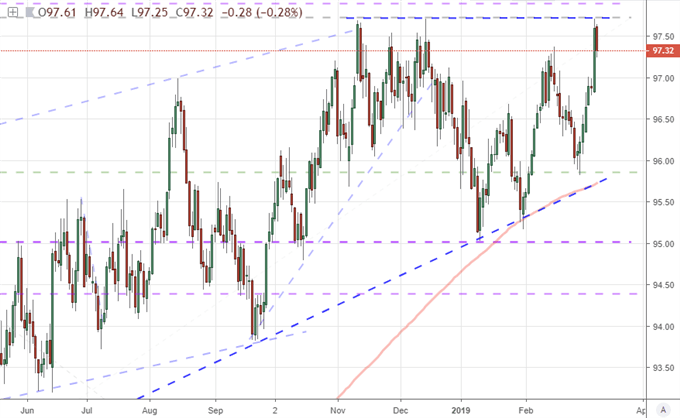 Looking for a fundamental perspective on US Dollar? Check out the USD Fundamental Forecast.

Depending on what you look to as your benchmark for the US Dollar, this past week was one of high drama or simply a brief jolt of volatility. Either way, traders should be tuned in to see if there is an imminent break of a more significant technical boundary that could usher us into the long-awaited proactive continuation of an otherwise stunted bull trend. I remain skeptical. Not because of the prominence of the levels that we are dealing with – there are some very serious technical milestones currently under tension. Rather, my focus is on the general performance of the Greenback itself. Let’s consider first the most popular Dollar Index, the ICE’s Dollar Index. This measure put in a remarkable triple top through Thursday’s peak at 97.70/75. Friday’s retreat gives weight to the technical importance to the figure – as I don’t think the 61.8% Fib of the December 2016 to February 2018 bear trend is capable of carrying that mantle alone. Another solid rally in the week ahead could push this market to levels last traded in May or June of 2017. The caveat here is less the presence of that level and more the uneven pressure and conviction from the Dollar elsewhere in the market.

The DXY is a trade-weighted index which gives far greater weighting to the EURUSD than any other of the major crosses. That is a reasonable measure for the Greenback, however, it doesn’t ensure that its progress alone can inspire the kind of breadth to support a universal bull run. A far more muted reflection of the benchmark currency is offered from an equally-weighted measure. As can be seen below in the weekly chart, the precision of the past four months’ range high was not as acute nor the effort to overtake it so drama-packed. 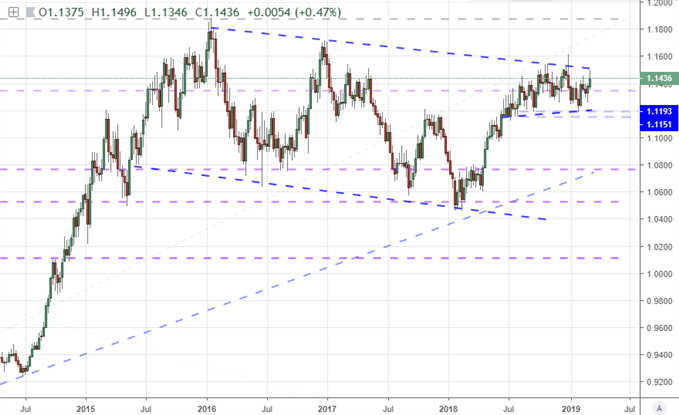 Taking a look at the world’s most liquid currency pair more closely, there is little doubt the anticipation surrounding this benchmark. Interest is as amplified due to the extremely quiet environment as the technical effort mounted this past week. Whether you consult a 20-day or 20-week (as below) average true range, the basic price-derived volatility measure is reflecting exceptionally restricted trading conditions. Extremes do not last – that is why we label them extreme. That recognition added substantially to the expectancy heaped on the pair’s temporary slide through 1.1200. That is not only a range low of the past months, it is more importantly a 61.8 percent Fibonacci retracement of the 2016-2018 range and the same corrective level of the pair’s historical span (dating back to when it officially began trading in 1999). There is little doubt that if this level were to give, it would make a big impression on the Dollar itself. Yet could it rouse the currency to its own universal bid or just leverage a more restrained, indirect buoyancy. 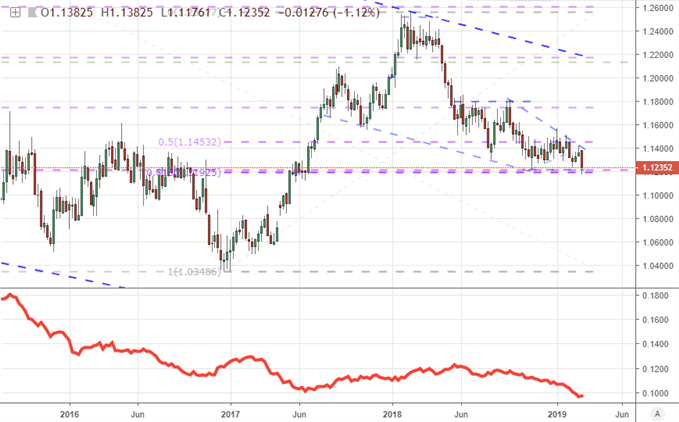 Looking to the other most liquid Dollar-based majors, the USDJPY seems to offer the same general moral support as other Dollar measures that are bullish, but the momentum and proximate technical figures are far from overpowering. Since the flash crash that opened the trading year, the pair has advanced in a productive rising channel that still seems far from more significant resistance levels around 113 and 115. Risk aversion seems a strong pull for this Yen cross with a steady retreat through the week – accelerated on Friday – that put it back to the bottom of its channel. There was very notably little of the Thursday USD charge that we had registered for European currencies. If that is the case, don’t expect this pair to readily add to momentum justified through a singular pair. 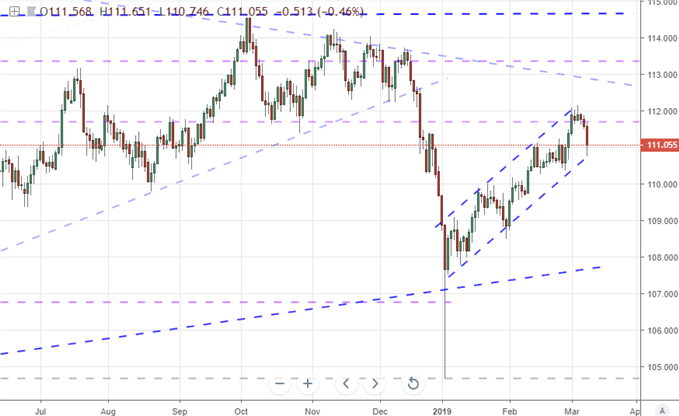 In contrast to its Yen pairing, the Dollar’s climb versus the Pound was consistent and very productive. GBPUSD reversed after a temporary foray above 1.3300 with more hearty levels of resistance feeling little heat like the 50 percent Fibonacci retracement (not a real Fib level) of the 2018-2019 bearish run. The pair is not in contact with its 200-day moving average, but neither prevailing winds nor these proximate levels are likely to matter much for the Cable. The Sterling will be a highly motivated currency – whether for a lack of movement or an excess – owing to a series of scheduled votes on Brexit. This is a theme that owns all the headlines when active and therefore overrides most other concerns when trading Sterling. It is possible that a EURUSD move coincides with risk (USDJPY) and a Brexit outcome (GBPUSD) which thereby covers the vast majority of Dollar trading in the market, but that is a lower probability outcome. 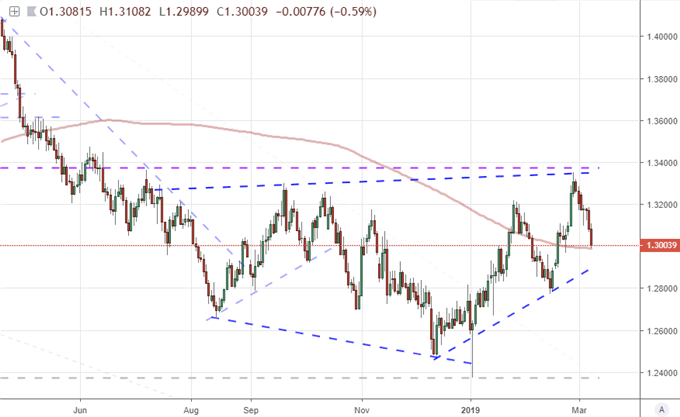 There is a way that the Dollar can generate enough indirect heat from the financial system to make an intrinsic rally: if risk trends collapse. We have seen sentiment take a dive this past week with benchmarks like the S&P 500 and Dow sliding into tentative hyperbolic reversals. There is as yet no definitive momentum behind this ‘fear’ run, but if we do see panic start to set in, the Greenback has good precedence as being the absolute haven traders run to. As abstract as this may seem, it can be tracked through some rather simple measures. I prefer the FX volatility index I made out of the aggregate of the CBOE’s EURUSD, GBPUSD, USDJPY implied volatility measures. 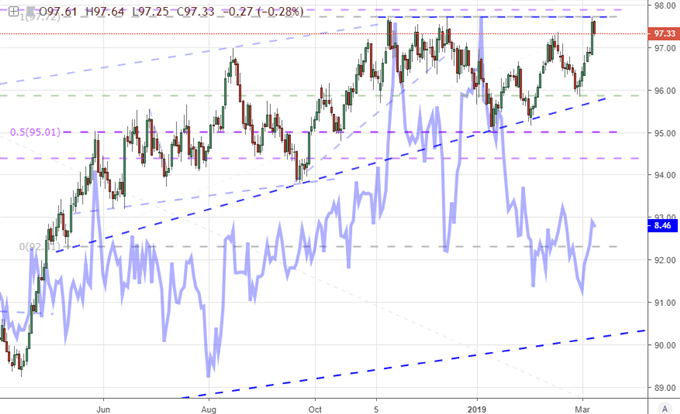 Finally, how are traders positioned in case markets start moving in a significant way? If the markets are already heavily vested into a long Dollar position, it could prove difficult to generate enough of a market to build up an already stretched exposure. While certainly not at the extreme, there is still a heavy skew in favor of a long-Dollar view in the CFTC’s speculative futures positioning data (COT). In the short-term however, retail traders have positioned themselves aggressively for the range swing. Seeing that exposure covered could certainly help EURUSD get back below 1.1200 and at least turn the engine over a few times for bulls. 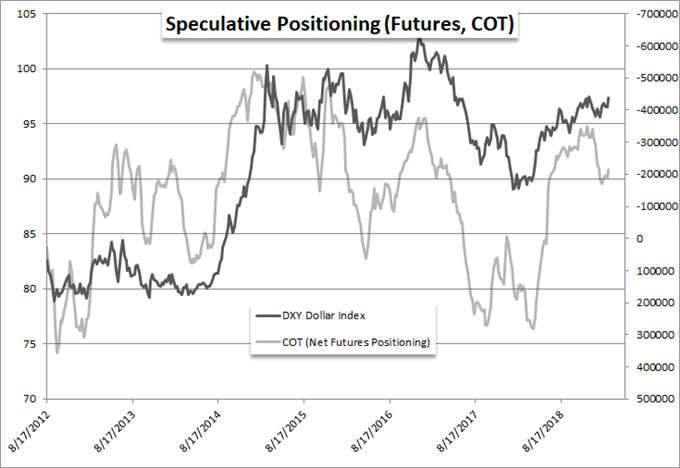 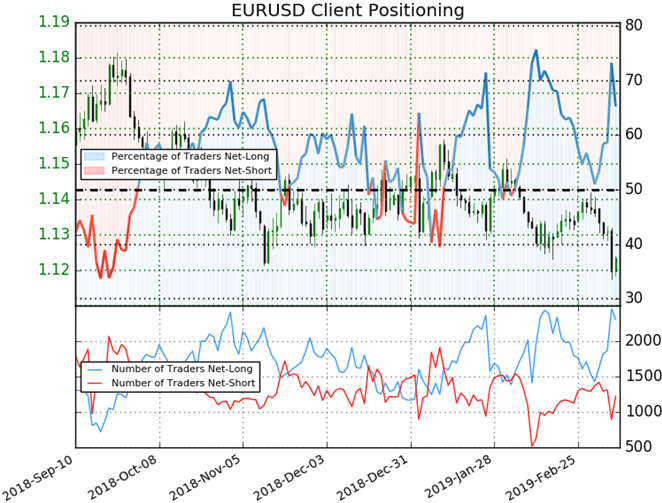