Crude oil has failed to reignite the animal spirits of the sellers or bears despite growing concerns of global growth forecasts in 2019. Whether traders look at the German or Japanese manufacturing PMI, the worst combined performance in five years or other repercussions of the US-Sino Trade War the crude oil picture remains perplexing.

Looking to the chart, crude oil may well continue higher as it recovers from the 44% drop from October to late December. The current corrective or trend-consolidating move may well lead into another advance as the supply disruptions persist thanks to the upheaval of Venezuelan leadership.

Looking at the WTI chart above, I will continue to focus on you can see that the price is holding above $50/bbl, and the Ichimoku cloud on a four-hour chart. The daily WTI chart above shows that price has moved into prior December opening range resistance near $54/bbl. However, a break above this zone could show that price is set to extend toward the $59-$63 zone, which is a Fibonacci retracement zone of the October to December fall.

Another factor, in addition to Elliott Wave favoring a continuation of the rebound higher and supply shocks from Venezuelan uncertainty, is the US Dollar. Because oil is priced in US Dollars, a stronger dollar tends to put pressure on the price of Oil. However, traders in the interest rate futures market are beginning to doubt the Fed will be able to hike twice in 2019 as they previously mentioned they might, and the macro background could support this doubt further. Should the suspicion of Fed tightening lead to a weaker US Dollar in the weeks and possibly months ahead, that would likely support the price of crude oil even further. 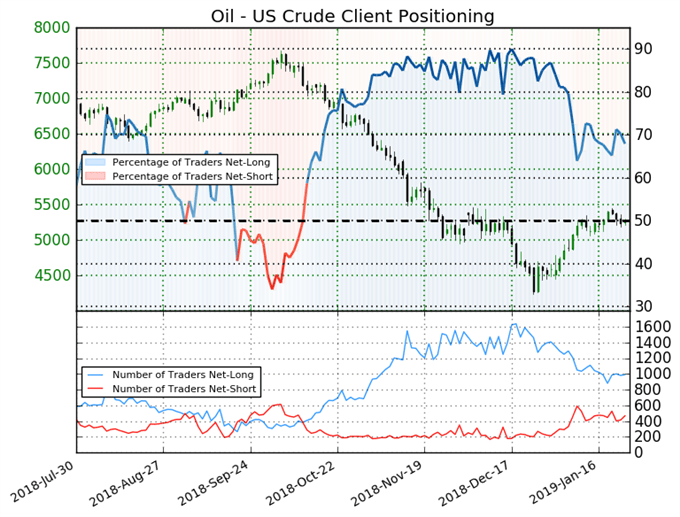