You’re in luck, DailyFX’s Q1 2019 Crude Oil Forecast Was Just Released. You can access it here

Here’s a fun stat for the quants out there. Since November, WTI crude oil has seen six moves beyond a three standard deviation move with five lower and one higher registered on December 26. Before November, going back to January 2017, there were zero such moves.

These violent moves speak to the environment that crude and most other risky assets have found themselves within since Q4 began. Adding more to that point, the aggressive moves higher tend not to be a sign of a healthy market despite large gains as the sharpest bullish moves ironically are commonly seen in bear markets.

Supporting points for the crude bounce remain in play though they are weakening.

First, the US Dollar’s precipitous drop slowed this week despite Powell’s comments on Thursday reiterating that the Fed will be patient and prepared with flexible policy.

Lastly, global data continues to weigh on the demand outlook. Citi’s Global Economic Surprise Index is at the lowest levels since June.

The December 24 low will likely be a place where bold bull’s or tactical bounce-playing bears will change their view at $42.43/bbl while likely expecting price to reach $55.57/bbl., which is the 38.2% retracement and the January 2017 high. 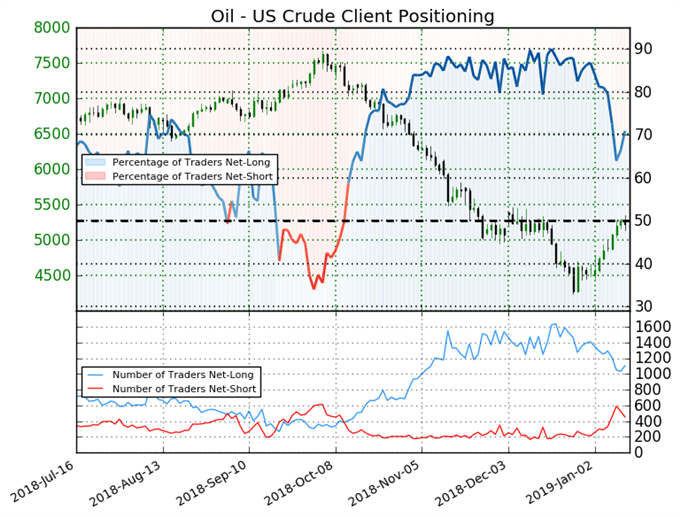 We typically take a contrarian view to crowd sentiment, and the fact traders are net-long suggests Oil - US Crude prices may continue to fall(emphasis mine.)