Consider your Dollar views carefully. We are heading into the final week of “full” liquidity of the trading year. This is like reaching the cusp of a black hole in physics: the normal laws of trading will begin to distort. Market depth plays a crucial role in what kind of landscape we can expect. Without significant liquidity, for example, it can be extremely difficult – if not impossible – to forge a lasting trend. Progress comes when there are further bids (or offers on the short side) behind technical moves like breakouts. Should the orders dry up, so too will the momentum – even if we are immediately on the heels of a high-profile break.

That is assessment we will have to weigh with the Greenback when markets open back up for trade on Monday. To end this past week, the DXY Dollar Index charged a run on an intraday basis to the highest level we have seen for the benchmark since June 21, 2017. Clearing the November-December range high alone is unlikely to be substantive enough to flood the market with the remaining speculative participants’ bids. I am a believer that there is a self-fulfilling element to technical analysis which suggests that the more overt a market level or technical barrier is, the greater the weight it carries with triggering speculative moves. Looking for greater depth in the index alone that may help rouse enough interest to offset the twilight of liquidity for the year, the 61.8 percent Fib of the January 2017-high to February 2018-low stands just below 98 (97.91). That isn’t substantive enough in my book to facilitate bulls. 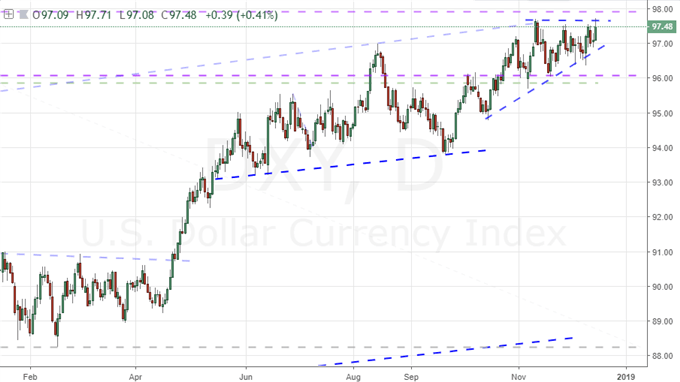 Of course, there is far less interest behind the trade-weighted Dollar index than there is for individual currency pairs. With that said, the most liquid of the ‘majors’, EURUSD, has seen its Dollar jolt fall well short of its own 18-month Dollar milestone down near 1.1200. It is difficult to facilitate a break (some would say ‘breakdown’ in this case) from the middle of a range. First you need to cover the relevant ground to the border and then make the strong drive to clear the boundary. Amongst other majors, the Cable (GBPUSD) is operating more explicitly on the Sterling’s guidance and USDJPY has worked its way into the middle of a 114.50 – 112.25 range. 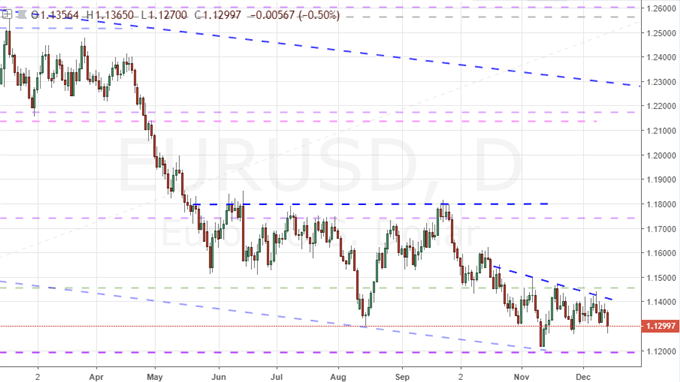 Though conditions are likely limiting for significant moves for the Dollar – such that follow through on key breakouts is a low probability – moves that are more appropriately defined as corrective or reverting may be more fruitful. There are a few USD-based pairs where gains are possible without requiring a systemic conviction. NZDUSD below suggests something along those lines as the recent reversal against the strong Greenback means the speculative positioning isn’t so stretched. That is not to say that it will natural swing back to October lows, but a bullish USD bias will likely allow for more run. The same is true for AUDUSD which slipping below its 50-day moving average offers a clear break – but the extent of its past months’ range is not much further down around 0.7050 (it is currently at 0.7180). 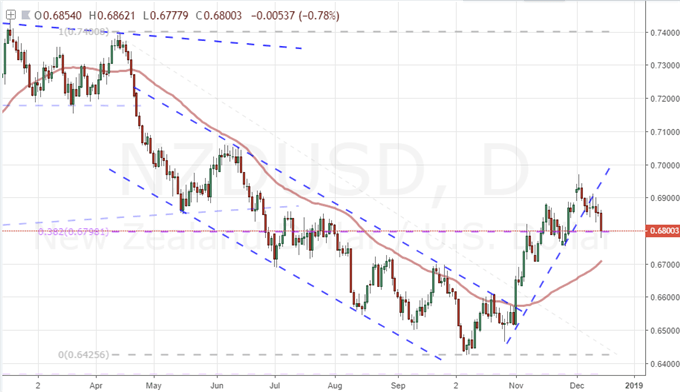 To further illustrate the disparity in the pressure that the DXY suggests with its proximity to resistance, below we have an equally-weighted Dollar Index. The late-October highs are still a rally off. Covering ground would be the first move to establishing a meaningful bullish trend. That is certainly possible – though improbable – very early next week before the focus on Wednesday’s FOMC decision anchors the market. The policy update itself could offer some fundamental interest to trigger a price move and that subsequent charge (if bullish/hawkish). Yet, then we would witness a rapid decline in open interest with the subsequent week gutted for active trading. 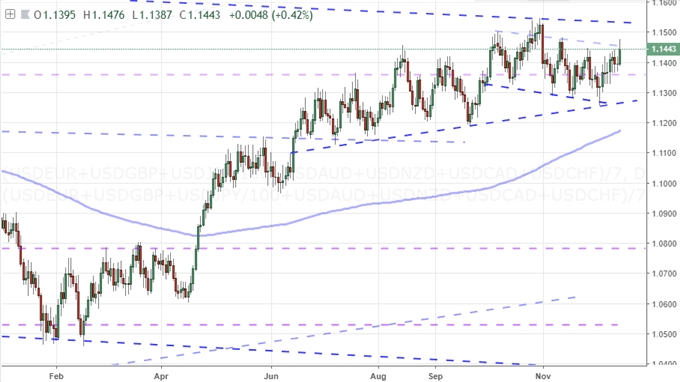 Taking a look to history, I wanted to see how the DXY Dollar performed on the final full week of trading before the Christmas holiday took western word markets offline. This should never be considered certainty for performance moving forward, but it can expose statistical norms derived from necessary changes in liquidity associated to the markets (accounting, portfolio balancing, etc). On average, the last full week has borne out a modest loss for the currency. That said, five of the last six years have actually registered gains. Volatility will likely be the determining factor this year – it remains remarkable high despite seasonal drain and the Dollar can be tempted back into its safe haven role. 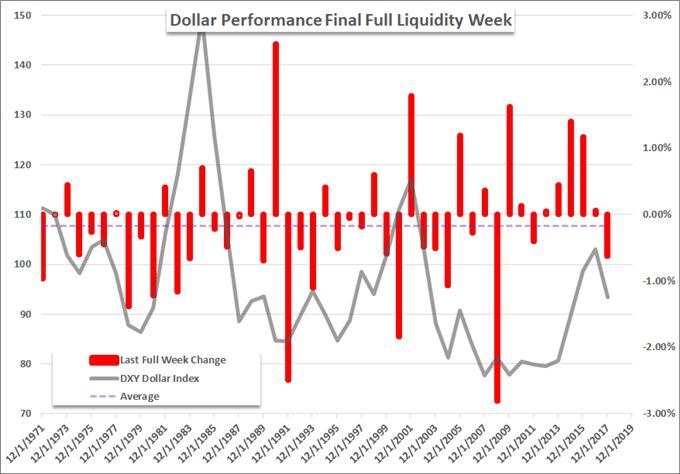 And, since this will be the last weekly forecast for the year, it is worth looking at the performance averages in the first full liquidity period of the new trading year. Here too we have a statistically relevant positive lean (albeit a modest one averaged out), yet with a deviation in recent history with five of the past six years seeing losses for the DXY. 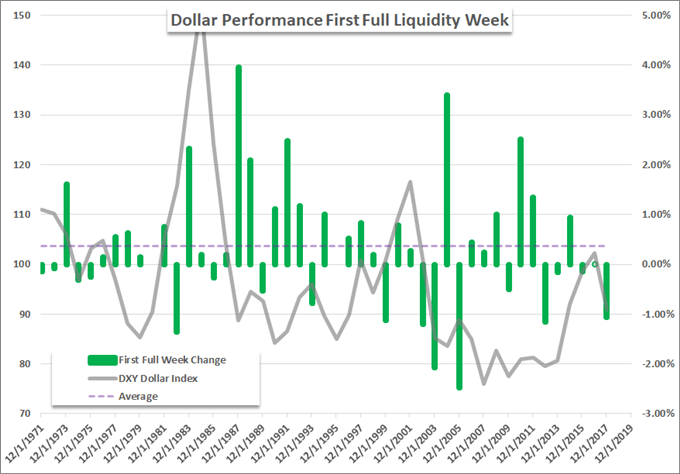 Showing the exposure the speculative rank has in the market heading into these final weeks, there is still a heavy, net-long position from futures. The past week alone did see a drop of approximately 35,000 contracts from the net long balance but that does little to mobilize a strong bearish interest against the dying light of liquidity. Yet, this skew will still be in place when we enter 2019 with fresh eyes and a charged speculative agenda. 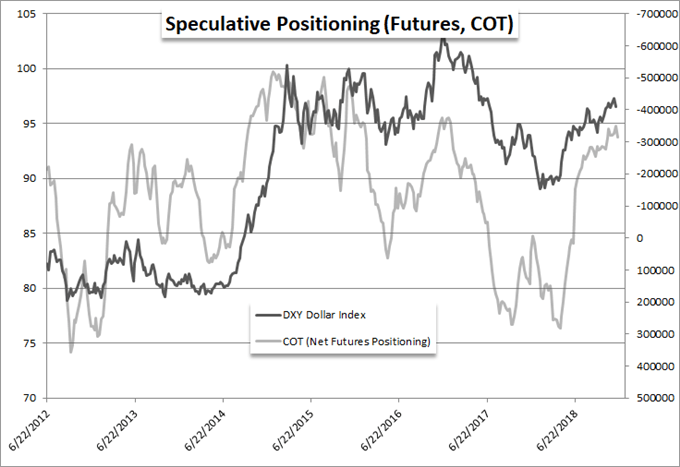