- EUR/USD’s symmetrical triangle may be biased for a topside break; another interpretation of recent price action sees an inverse head & shoulders pattern looking for a bottom.

- EUR/CAD’s break of its downtrend since May is taking the form of a bullish falling wedge.

Technical Forecast for the Euro: Bullish

The Euro was the third-best performing major currency last week, gaining ground against all but EUR/JPY (-0.23%) and EUR/CHF (-0.05%). After sustaining losses for the better part of two months (mid-September to mid-November), the past two weeks of trading have seen several EUR-crosses pause in their respective declines. Now, bottoming efforts are under way in several crosses, while outright turns have started to materialize in others. With a fundamental backdrop that, if not bullish, is at least biased against further losses, there may be further room for bullish price development in the EUR-complex over the coming days. 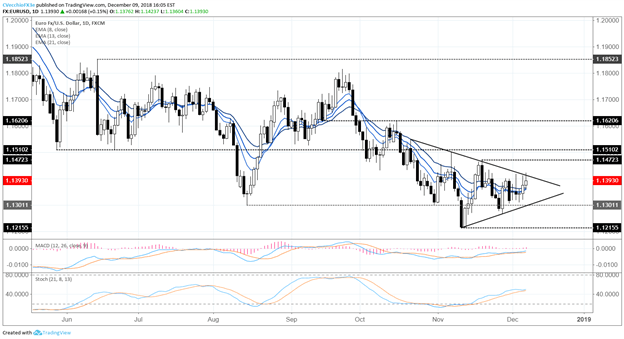 EUR/USD has been trading sideways for several weeks now, and the series of lower highs and higher lows has coalesced into a symmetrical triangle. While such a development in the context of preceding losses would usually point to a resolution to the downside, recent price action has revealed the prospect of an inverse head & shoulders pattern emerging at the 2018 lows. Coupled with the more pronounced weakness in the DXY Index (signifying deeper weakness in the USD leg of the pair), EUR/USD may have some wind at its back.

Price has now turned higher through its daily 8-, 13-, and 21-EMA envelope, showcasing the building bullish momentum. Both daily MACD and Slow Stochastics have turned higher, although the former has not turned higher through its signal line yet. A move through the November 20 bearish outside engulfing bar at 1.1472 would confirm a topside breakout; only below the November 28 low of 1.1267 would the budding bullish outlook be invalidated. 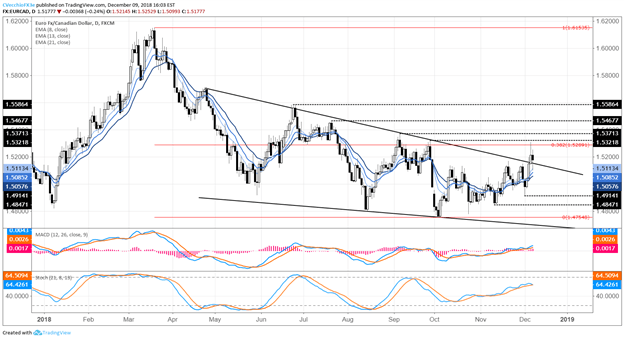 EUR/CAD has started to emerge from its near eight-month long falling wedge, a reversal pattern that calls for a bullish forecast for the foreseeable future. Momentum is building to the topside, with price above its daily 8-, 13-, and 21-EMA envelope, while both daily MACD and Slow Stochastics remain pointed higher in bullish territory. The path of least resistance appears to be higher, particularly as long as oil prices remain weak (underpinning CAD weakness).

However, the attempt higher hasn’t been met without resistance thus far, suggesting that it may be too early to declare a reversal in place just yet. EUR/CAD’s advance last week failed to clear out the 38.2% Fibonacci retracement of the 2018 year-to-date range at 1.5289, likewise falling short of the September 27 bearish outside engulfing bar at 1.5322. A confirmed close through the latter of these two levels would signify validation for the bullish reversal attempt. 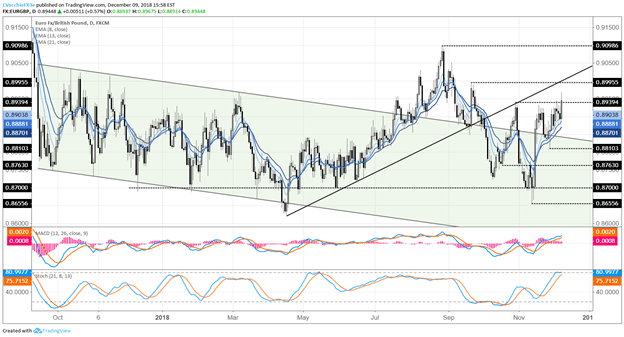 EUR/GBP has been the most volatile EUR-ross in recent weeks, no doubt thanks to the GBP leg of the pair as Brexit negotiations have been derailed by fears of either ‘hard Brexit’ or ‘no deal’ outcomes. EUR/GBP has emerged out of the descending channel dating back to last September. Having now cleared out the October 30 high at 0.8939, with price above its daily 8-, 13-, and 21-EMA envelope, and with both daily MACD and Slow Stochastics pointing higher in bullish territory, EUR/GBP’s bullish momentum is building. The first major resistance comes in at 0.8996, the September swing high, while former trendline support from the April, May, June, and September lows comes in near 0.9015 by the end of the week. A break above said area would offer more confirmation to the bullish efforts.

US Dollar Forecast: Dollar Wind Up Threatens to Resolve with a Break Before 2018 Ends