Looking for forecasts, trade ideas, and educational content? Whether you just got started or have been trading for a while we’ve got you covered on the DailyFX Trading Guides page.

S&P 500 and Dow look to maintain above support

Thursday’s sharp drop and reverse in the S&P 500 has support validated down around the lows from October and November along with the trend-line from early this year. Looking for the market to stabilize a bit, but remain volatile, just perhaps not as volatile as recently. A rebound isn’t likely to last long, however, as general tone and resistance should cap any move higher. For the trend lower to really take hold it will require a break of 2603. It’s a market for the very short-term minded trader as swings in price are quick to wipe out profits.

The Dow Jones still refuses to close below the February 2016 trend-line that the S&P 500 has long left behind already. The Thursday reversal took shape from just below this important long-term threshold around the lows from Oct/Nov and the trend-line from the low in February. On the top-side lies a trend-line running down from the record high which capped the gap on Monday. The convergence of bottom and top-side lines could start to dampen volatility, but lead to a potentially explosive opportunity down the road. For now, it’s a vol traders market, back-and-forth.

See the IG Client Sentiment page to view how traders are reacting to the bout of stock market volatility.

Last week’s tag of the neckline of the long-term head-and-shoulders pattern and subsequent breaking of the 2011 trend-line on a weekly closing basis as the big-picture outlook firmly bearish. While minor support from 2016 may keep the DAX buoyed near-term, a move higher from here is viewed as a seller’s bounce. The area immediately surrounding 11k is first up as resistance, followed by a retest of the broken 2011 trend-line. On a break below last week’s low of 10762 (2016 support), the next levels of are 10402 and then 10175. 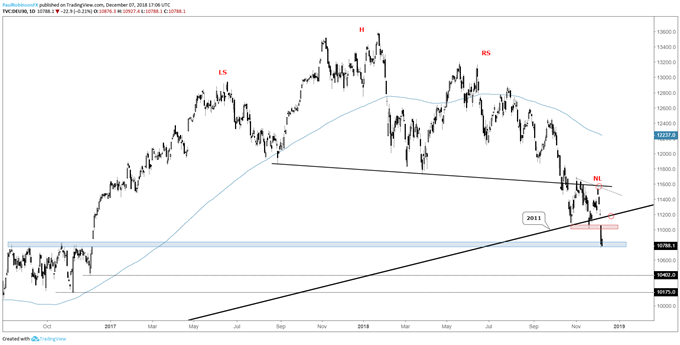 The Thursday break took out March/October support and now has the FTSE continuing its move lower. Like the DAX, there is support from late 2016 which was met and held to end the week. And also like the DAX, a bounce from here is viewed as an opportunity for selling. The broken March/October support now becomes resistance on a bounce. A break below 6664 will keep the market reeling as visible support beneath that point is lacking. We could see a little digestion between support and resistance before any sustainable move develops.