Considered on its own, the Dollar looks almost sanguine. The currency worked its way deeper into a range that will have to end with a break soon. Of course, a break does not have to translate into the explosive moves that catalyze major trends – even though we may always be on the hunt for such resolutions. There is actually an momentous force that will be working against the currency’s ability to transition its necessary breach from a dwindling range into full-fledge trend: liquidity. We are heading into the final weeks of the year, a period that historically sees a systemic reduction in participation owing to holiday closures, accounting maneuvers and simple habit. Yet, to assume a forcible quiet in the capital markets from such prosaic influences against a year of exceptional volatility would be more than complacent – it would be negligent. There would be little downside to prepare for volatility should there be no decisive moves from risk assets or the Greenback. However, the assumption versus realization of the opposite can translate to serious exposure risk and loss of opportunities for those trading the majors. 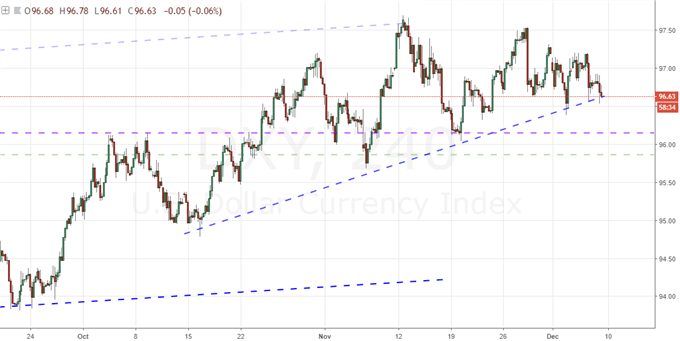 Looking to the trade-weighted Dollar index, the congestion is readily apparent. The swing high from early November – the highest level for this measure since June 2017 – is not far from where we end this past week. Theoretically, it would not take a significant charge to return the market to that level and possibly force a break. While 98 is a significant technical ceiling, it would likely be difficult to simply muster the level of appetite necessary to simply break short-term resistance and reach that figure – much less surpass it. The ‘path of least resistance’ in this case would be a break to the down side which could open up support established through the second half of the year down around 94. Such a move would still be difficult to build up to, but it still wouldn’t come with an inherent assumption of a full-blown trend. 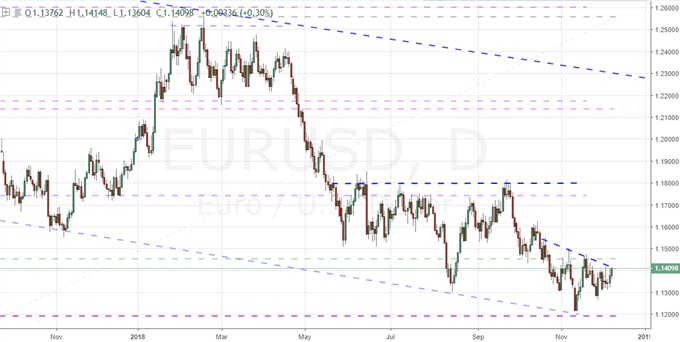 Looking into the major component of the DXY – EURUSD which accounts for approximately two-thirds of the measure – the picture is inverted but the same implications are apparent. There is a prevailing trend here (bearish or bullish for the Dollar), but the hesitation for progress is apparent. Price action over the past six weeks on this benchmark could readily qualify for an inverse head-and-shoulders pattern. Yet, the make up of the chart pattern alone means little. This classic pattern is used to qualify possible reversals, and there is a critical change in both tempo and direction that occurs under such circumstances. This is difficult to reconcile against the inevitable drained liquidity that we will be dealing with these coming weeks. That said, high volatility against a thin market can lead to more severe – if shorter-lived – moves. 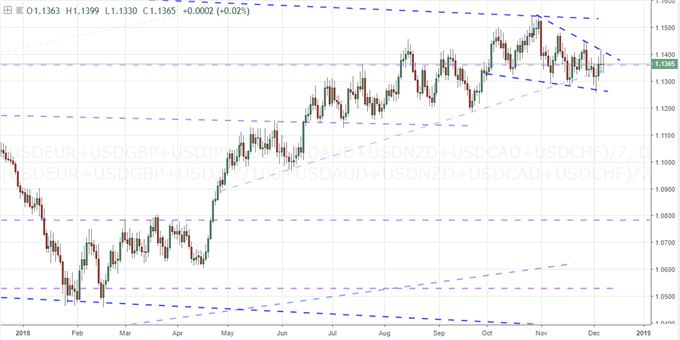 With a look to an equally-weighted index, the general quality of the Dollar’s bearings do not change. Consolidation is even more apparent in this measure of the currency’s bearings while the technical lines are little more explicit. Consolidation is both common as pauses in prevailing trends as well as hesitation before reversal. The longer the indecision, the closer the conclusion’s outcome moves to a 50/50 chance. This is the longest period of reservation we have seen from the Greenback since it began its current bullish phase at the beginning of the year. 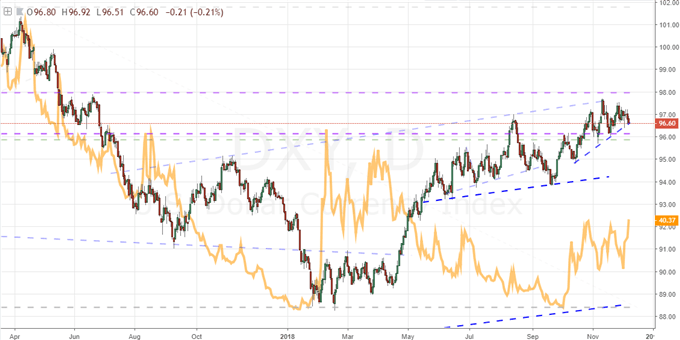 If you want to evaluate the potential for the Dollar in both direction of a break and follow through thereafter, there are few complementary charts that are worthy for frequent reference. The most pressurized catalyst for Dollar movement would be general market volatility. At different intensities of market activity, the Dollar will revert to different roles. If volatility is low or dropping rapidly, the currency would more likely see its carry trade appeal bolstered, but there may also be a moderate level of premium afforded to its safe haven status that would cool. Should risk aversion kick in a meaningful – though not severe – way, the currency is more likely to slide. Such a move would exploit the currency’s buoyancy through 2018 on the back of the carry trade premium that has built up. If, despite the anticipated fade in liquidity, markets explode and volatility surges, need for liquidity will revert the Dollar to its deep safe haven state and stoke a lasting bid. Above is the VXX ETF which measures short term volatility – and the market’s appetite to speculate on it… 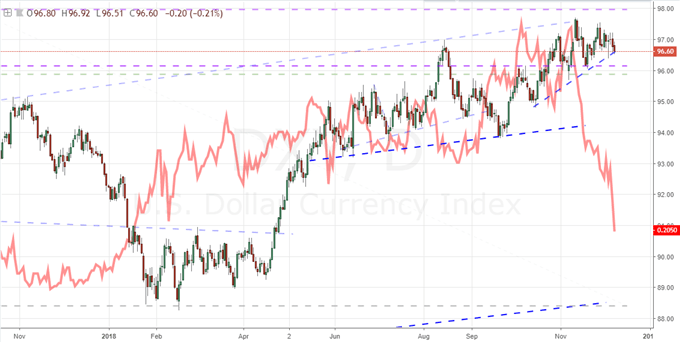 A rise or fall in volatility can establish different bearings for the Greenback, but to truly get a strong fix on its intent, you should consider that filter against another important measure – the anticipation of rates moving forward. Above is the expected Fed rate forecast via the curve through 2019. In other words, it looks at the forecasted rate Fed Funds rate in December versus January. Should it rise, that reflects anticipation of a steadily rising interest rate which is like a rising dividend for currencies. Should it drop – as it has this past month – it weighs on the perceived premium. Notably, the Dollar has held strong, but add some risk aversion to this equation, and it may be difficult to hold back the tide. 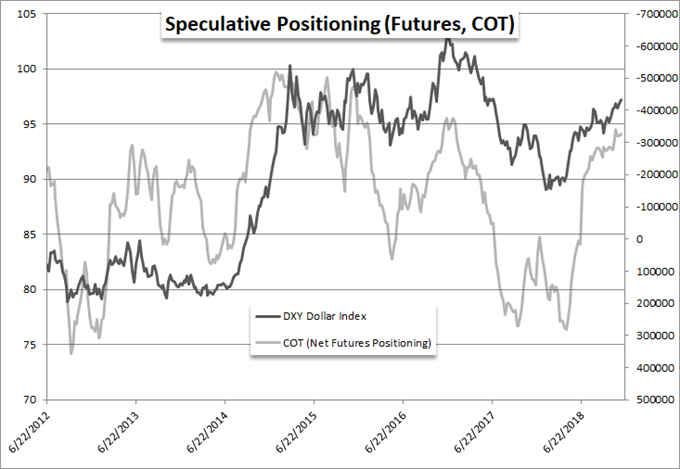 The fuel to charge any fire – bullish or bearish – depends on the speculative depth the markets are able to muster. Liquidity is one aspect to that, but so too is the capacity for further build up of a net long position or conversely a deleveraging. Over the past few months, net speculative futures positioning behind Dollar contracts has struggled to make any significant progess following the dramatic reversal from the most bearish exposure in five years around the middle of the year. It is possible to warm bullish expectations, but to mount a dramatic appetite from the level of exposure this reflects is difficult to envision. Much easier to imagine is an abrupt reversal and the fleeing bullish exposure it would represent as the market deleverages.