- Gold has been trading sideways for two months, still unable to clear out the former December 2017 low at 1236.37, having closed below it every session since July 17.

- Bears won’t be comfortably back in control unless the uptrend from the August low is broken, which would be confirmed by a move below the November 13 swing low of 1196.17.

- Retail trader positioning points to further losses for Gold in the days ahead.

Gold prices have been trading sideways for nearly two months, but recent developments may make it more likely for downside to develop in the coming days. Even as the US Dollar was pulled back from its run-up to its 2018 high, Gold was unable to generate much bullish momentum. Gains by the DXY Index in eight of the past ten weeks has made for a difficult environment for USD-denominated commodities.

But now there is another concern for Gold moving forward: the dramatic collapse in energy prices during Q4’18. One of the appeals of holding Gold over a long-term horizon is that it acts as a hedge against inflation. With both Brent and Crude Oil dropping by over -19% over the past four weeks, we’ve seen market-based measures of inflation expectations (5-year, 5-year inflation swap forwards) plummet across the world’s developed economies.

To this end, whatever perceived benefit Gold may have been ready to accrue as a result of the Federal Reserve scaling back its hawkish rhetoric in this week may not be realized. Indeed, an environment where nominal interest rates aren’t rising as quickly as anticipated should, in theory, undercut gains by real yields; historically, falling real yields are bullish for Gold prices. However, an environment marked by rates of inflation coming down means real yields will stay elevated, which does little favor for Gold prices. 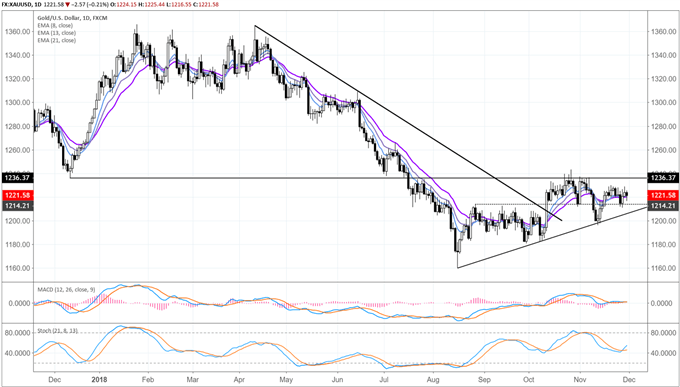 For traders, there’s not much to like about the current technical structure of Gold prices, no matter what strategy perspective you take. With neither bulls nor bears able to take control over the past two months, Gold has found itself unable to retake the December 2017 swing low of 1236.37, which price has not closed above since its failure on July 17. Multiple tests in late-October and early-November proved fruitless as well. In terms of support, the October 11 bullish outside engulfing bar low has not been test since it was established; the November 13 swing low came in just above at 1196.17.

The Gold chart above is, admittedly, uninspiring at present time. If you’re a range trader, we’re too far from either support or resistance, trapped in the middle of the two-month range, to size up risk appropriately; similarly, being in the middle of a range, breakout traders find themselves sidelined. Conversely, if you’re a momentum trader, the fact that both daily MACD and Slow Stochastics are flat at their respective median or neutral lines means that momentum is dead; this is confirmed by the lack of separation among the daily 8-, 13-, and 21-EMAs. 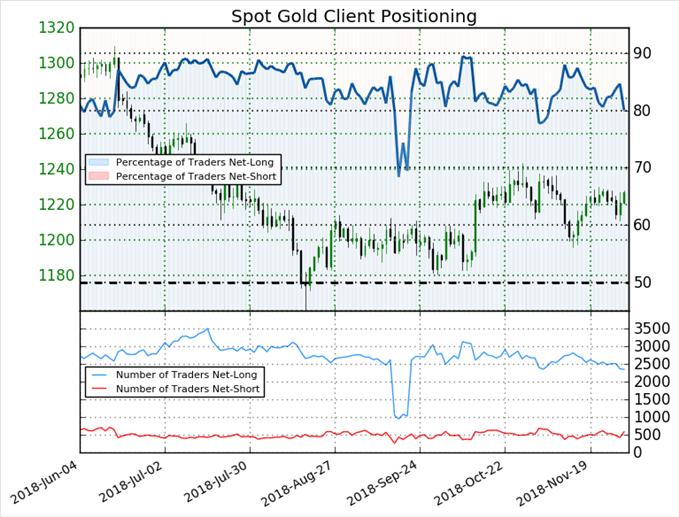 We typically take a contrarian view to crowd sentiment, and the fact traders are net-long suggests Gold prices may continue to fall. Traders are further net-long than yesterday and last week, and the combination of current sentiment and recent changes gives us a stronger Gold-bearish contrarian trading bias.

US Dollar Forecast: Dollar Feigns Confidence but Depends on Liquidity to Save Its Bull Trend