Price Action Muted for USDCAD Until Next Decisive Move

The USDCAD will be a closely watched currency pair this week due to Bank of Canada’s interest rate decision in addition to economic data releases on employment and manufacturing coming out of both the US and its neighbor to the North. While IG client sentiment remains bullish with a 69 percent net short positioning, the short term technical picture appears ambiguous. The currency pair has seen a stable ascent since the beginning of October from 1.280-1.335 in a tightly compressed channel. The narrow, choppy trading range epitomized the “buy low sell high” paradigm with a correlation of 0.92. 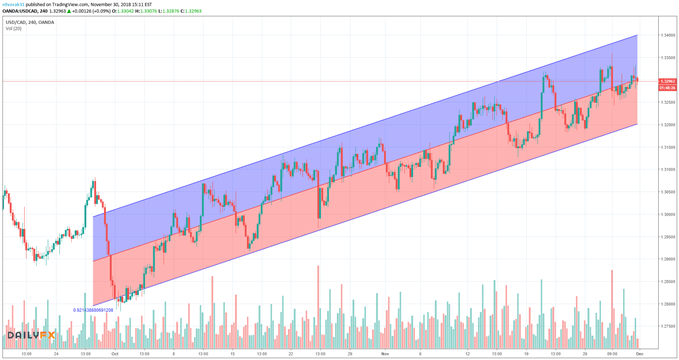 The slow and steady climb higher established a strong bullish trend which has been accompanied by a handful of consecutive higher lows and higher highs. With the spot price a few pips below its midpoint regression line, traders will look to see if the trend will continue rising or if USDCAD will see a shift in price movement. By taking notice of the Relative Strength Index (RSI), an indication of whether the currency is oversold or overbought, one can see that although the metric is diverging from the standard overbought level of 70, the upward trend is still clearly in play. 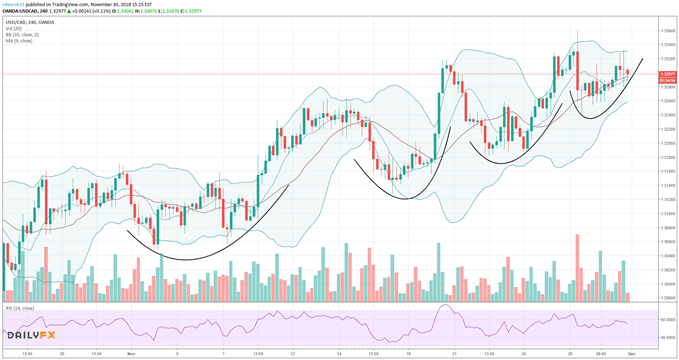 Transitioning to a different perspective, however, the exchange rate appears to be losing its momentum. After retesting the highs from June of this year at the 1.335-1.340 range, the USDCAD quickly sold off from resistance. But, the long term upward trend remains healthy and price movement looks to coil between the trendlines shown below. 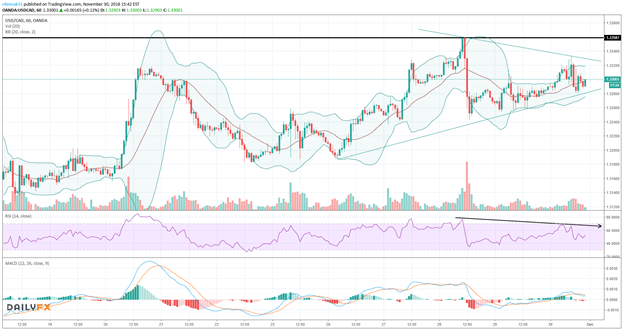 Until a decisive move is seen where the trendlines break, caution is warranted before forming a bullish or bearish bias given the murky fundamental drivers behind the currency pair’s performance. Once the trendlines are broken and a breakout is confirmed, the bullish upward momentum will continue, or a decisive reversal lower could be in the near future. If the upper trendline is broken, the USDCAD may quickly jump to retest the recent high at 1.336. But, if the bears take control a sizeable move lower and trend reversal would be on the horizon and could move down to the Fibonacci retracement levels lists support at the 1.324 and 1.314 area. 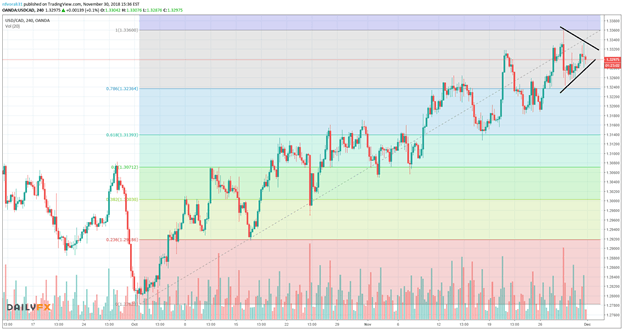