Technical Forecast for US Dollar: Bullish

US crude oil finally staunched the bleeding this past week. We entered the period extending an extraordinarily consistent string of daily losses for the commodity. That bearish run was finally capped at 12 consecutive days – a record that will likely stand for years, if not decades – with Wednesday’s bullish close. Yet, this change in tack really doesn’t register as the onrush of speculative appetite looking to take advantage of a severely devalued asset as one would expect. Tuesday’s loss could be described as the forming of a ‘panic low’. The extreme 6 percent loss on the day was the most painful the market had suffered since February of 2016. Such a move could significantly exercise much of the weakened bullish hands and encourage shorts to book profit – as the saying goes ‘don’t look a gift horse in the mouth’. If we were expecting a turn, it would often come in with bulls looking to fill the vacuum left by the extended drop. We would not see much of that speculative enthusiasm in the price action that followed the late acceleration. 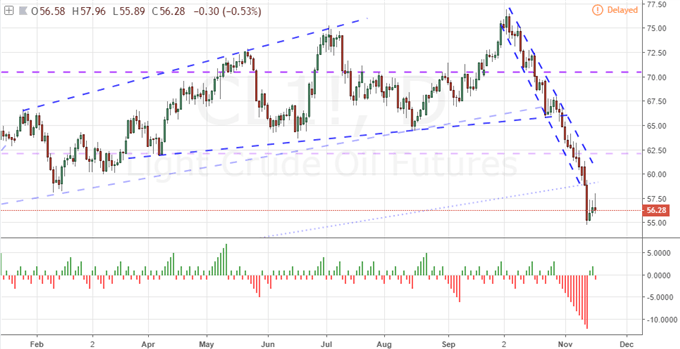 Looking at a lower time frame chart of US oil to help focus on the state of conviction in momentum, we find that the three days that followed Tuesday’s capitulation move showed very little overt appetite from bulls. The rebound from $55 to $58 (trough to peak) didn’t even recover two-thirds of the single session’s extreme losses. What’s more, the price action throughout was start and stop with Friday afternoon under considerable pressure. This looks more like a move of consolidation, which can still ultimately result in a longer-lasting recovery, but it is a far lower certainty than if bulls had charged in to establish a ‘V-bottom’. Traders should look for progress in staged moves higher. There is some modest precedence in $58 as February’s swing low, but it would only present serious restriction on progress if the market only coasts higher – instead of being driven by bulls. The same is true of $62 which is the 61.8% Fibonacci retracement of the commodities historical range. 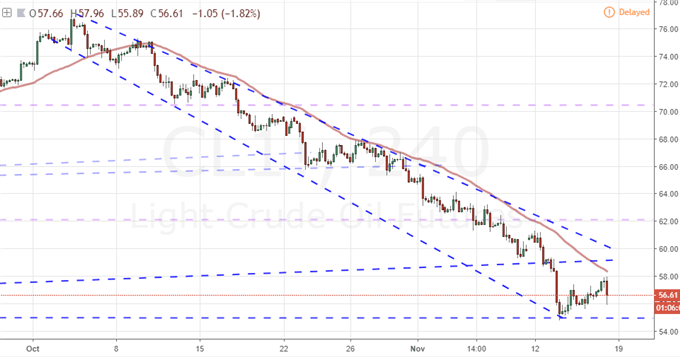 In contrast, looking to a higher level chart, we are reminded not to simply assume a true reversal just because of the brief pause. Despite the three-day consolidation to close this past week, the commodity would still put in for a sixth consecutive week’s slide. It would also clear the rising trendline support formed from lows in 2016 and 2017 (though the third test was only last week so is questionable for inclusion) as well as the 100-week moving average between $58-59. Looking back, there is a notable ‘pivot’ (point of both resistance and support) to be found in $55 owing to its influence as resistance between 2015 and 2017. Yet, that alone would not be enough to encourage me be confident that bulls can rest this market back into their control. Ultimately, momentum is the most crucial measure for this market. The break in the bearish progress is a good first start, but it can prove a mere breather – as we have seen in other bouts in this aggressive, near 30 percent tumble from early October. With liquidity drained in the week ahead owing to the holiday, be wary of easy follow through; but recognize that a reversal will require more than just an easy rebalance after a big move. 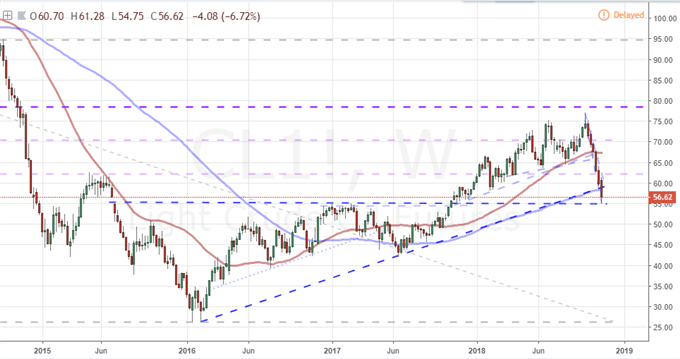 If we are looking at what can motivate an already aggressive cadre of bears to extend their chase of this commodity lower, we only need to look at the swing in speculative exposure. Though 2018 offered a peak in oil that was only four years oil, net speculative futures positioning reflected a record bullish exposure that far outstripped the 2014 previous peak (when spot was around $100 per barrel). There has been a considerable shedding of long interest over the past months, but there is still a heavy skew on the bullish side and that reflects a net speculative exposure of potentially greater losses for the holdouts. Few things are more effective in fueling a selloff than the threat of more losses when the rank is already underwater. 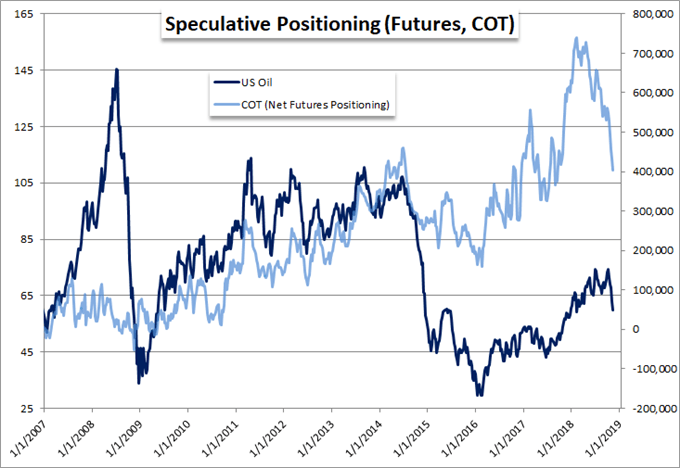