The British Pound fell under significant pressure last week as hopes of a ‘soft Brexit’ were slashed. After Prime Minister Theresa May proposed a draft text of her Brexit deal, ministers voiced concern and May saw a string of resignations including Brexit Secretary Dominic Raab. The developments sent Sterling considerably lower across all pairs. 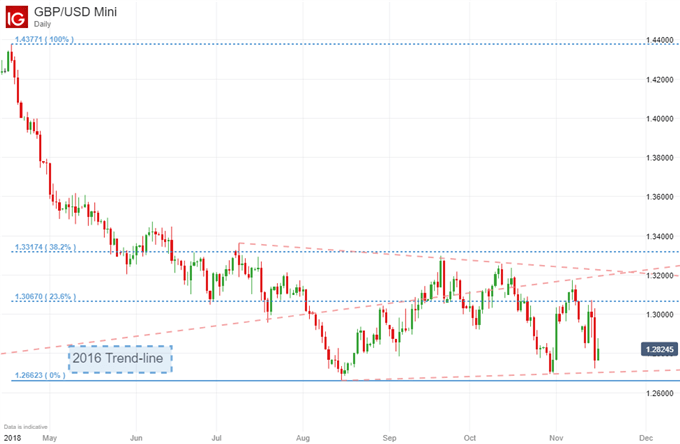 After a minor rebound on Friday, GBP/USD closed roughly -1.10% lower last week. The Brexit breakdown sent the pair near the bottom of the Fibonacci sequence originating in April. Coupled with the resistance trend-line from July, the successively lower lows in August, October and now November have begun to form a descending triangle. Further downside tests are needed to confirm its validity as the precarious fundamental landscape could shatter any minor to moderate technical levels.

See our long-term forecasts for the British Pound, Dollar, Euro and other currencies with the DailyFX Trading Guides.

To the topside, the 23.6% Fibonacci level around 1.3067 will continue to act as the first level of resistance in a move higher. Subsequently, the 2016 trend-line and topside of the possible triangle from July would come into play. 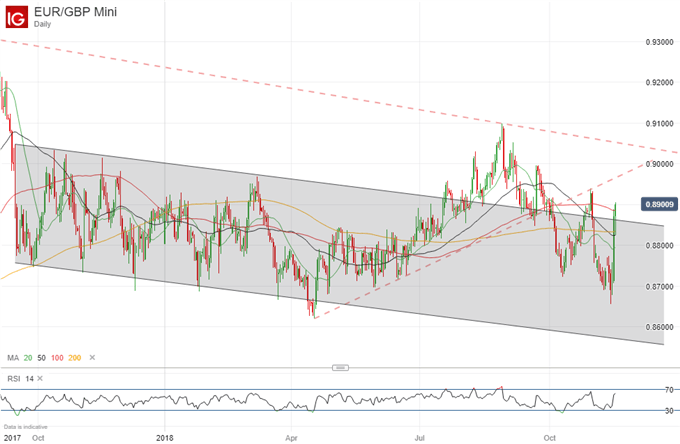 EUR/GBP saw a considerable pop this week and has continued to see prices swing sharply in recent weeks. Unlike GBP/USD the Pound was unable to recapture some losses on Friday as it closed out the week 1.80% higher.

The move also saw the pair climb outside of the channel from late 2017. The top border will now act as support in any attempted move lower. Further support is nearby with the 50, 100 and 200 daily moving averages.

To the topside, the trend-line from mid-April will offer resistance and if a total breakdown in Brexit dealings occurs the trend-line from August 2017 could act as a secondary level. RSI is at the top half of the range but has not entered into oversold levels which suggests there could be some room to run before a retracement.

As with GBP/USD, the driving factors for Sterling in the week ahead will be Brexit. The consequences of a no-confidence vote or an accepted draft text will be significant and result in considerable volatility for any pair that contains GBP.