- The Japanese Yen finished October as the best performing currencies, but its start to November has been inauspicious, to say the least.

- The technical outlook for the Yen has been clouded after near-term price action has seen momentum indicators start to turn less amicable.

- Changes in retail trader positioning seem to indicate that Japanese Yen weakness may be on the short-term horizon.

The Japanese Yen finished October as the top performing major currency, gaining at least +2% versus six of the other seven major currencies last month, including gains of greater than +3% against two of them (EUR/JPY -3.17% and EUR/CHF -3.31%). The fundamental conditions that have catered to Yen strength - the aggregate impact of tightening monetary policy, mismanaged fiscal policy (rising deficits), trade wars, high energy costs, and rising inflation – continue to rear their ugly heads.

But the rebalancing effects wrought by a new trading month meant that the Yen was sold off sharply in the first two days of November, and the scale of price reversal seen in a number of key JPY-crosses suggests that the technical outlook has been muddied in the near-term. Rather than looking for a specific direction in the days ahead, it may be best to wait for clarity to emerge among key momentum indicators.

Likewise, with the US midterm elections coming up on Tuesday, November 6, any technical outlook is best couched in the context of recognizing that Tuesday could produce conditions that could give reasonable cause for revisiting the short-term outlook. 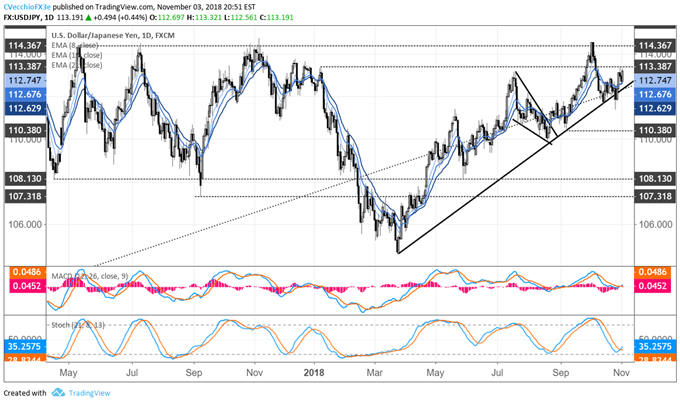 USD/JPY was able to stave off a worst-case scenario at the end of October, after entering last week below 111.60, support established by the rising trendline from the March, August, and September lows. But price has quickly returned back above the intra-year trendline, likewise retaking the uptrend from the 2012 and 2016 swing lows (the Bank of Japan’s Kuroda’s trendline) in the process. Thus, if USD/JPY entered last week on more negative footing, that view has been effectively neutralized in the short-term.

The sharp return higher in price now sees USD/JPY trading above its daily 8-, 13-, and 21-EMA envelope, with all of the moving averages in sequential order. However, while daily MACD has just turned higher at its signal line, Slow Stochastics have turned higher while still in bearish territory. Last week it was noted that “only a return back above 113.39 would warrant a more optimistic outlook.” This remains to be the case, with price entering the first full week of November at 113.19. 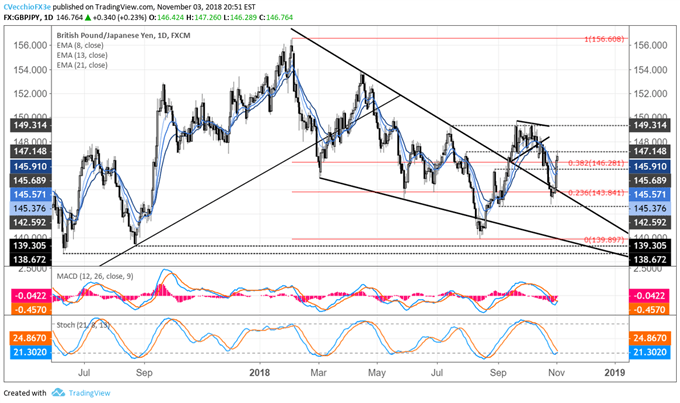 GBP/JPY is real-time proof of how a fundamental event can dramatically alter the technical outlook. Positive news on the Brexit front sent a shockwave across the GBP-spectrum last week; GBP/JPY was not an outlier in terms of its outstanding performance. Nevertheless, in the process, enough technical damage was done to suggest that the prior outlook has been invalidated.

The reversal seen last week has dragged GBP/JPY above its daily 8-, 13-, and 21-EMA envelope, although the moving averages are not in sequential order. Both daily MACD and Slow Stochastics have started to arrest their declines, but neither have turned higher yet (and both are still in bearish territory). Having returned back above the downtrend from the April and June highs, as well as the 38.2% retracement of the 2018 year-to-date range, it’s possible that the reversal has some more legs in the short-term. Without agreement among price and the indicators, however, a neutral outlook is taken.