- Friday’s price action among the JPY-crosses suggests exhaustion in the short-term, but weekly charts continue to point towards gains.

- Retail traders remain net-short the Japanese Yen, despite the whipsaw price action at the end of last week.

Another week of heightened volatility in global bond and equity markets proved to be fertile ground for another round of gains by the Japanese Yen. Spurred on by fresh concerns over the Brexit process and the Italian budget saga, GBP/JPY and EUR/JPY were two of the three worst performers, losing -2.45% and -1.53% respectively. More pressure on emerging markets amid trade war concerns weighed on AUD/JPY and NZD/JPY, which sank by -0.97% and -1.96% each.

While price action on Friday produced a sharp reversal in higher yielding currencies and risk-correlated assets, thus yielding a selloff in the Yen, the facts on the ground dictating the current risk environment haven’t changed: the aggregate impact of tightening monetary policy, mismanaged fiscal policy (rising deficits), trade wars, high oil costs, and high inflation are too much for market participants at present time. Weekly and monthly charts still point to further gains for the Japanese Yen, even if a round of short-term position squaring (profit taking at the end of the month) transpires. 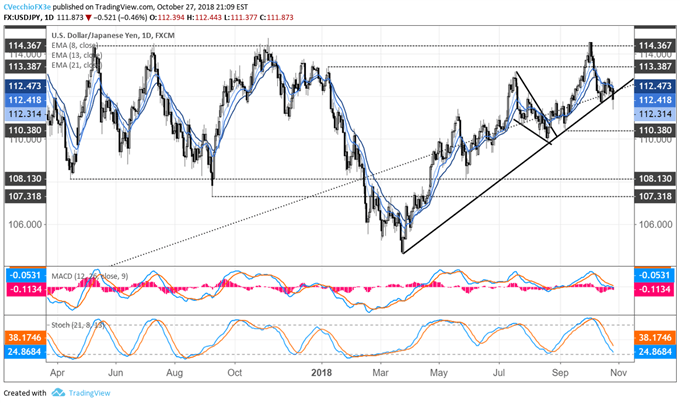 USD/JPY’s significant support near 111.60 around the uptrend from the March, August, and September lows as well as the longstanding uptrend from the swing lows in 2012 and 2016 (the Bank of Japan’s Kuroda’s trendline) has started to break. Indeed, despite a late rebound on Friday, USD/JPY still closed below 111.60, indicating the long-term outlook is turning more negative.

Price remains below its daily 8-, 13-, and 21-EMA envelope, while both the daily MACD and Slow Stochastics are still trending lower and moving below their respective median/signal lines. As was the case last week, USD/JPY rallies should be sold, and only a return back above 113.39 would warrant a more optimistic outlook. 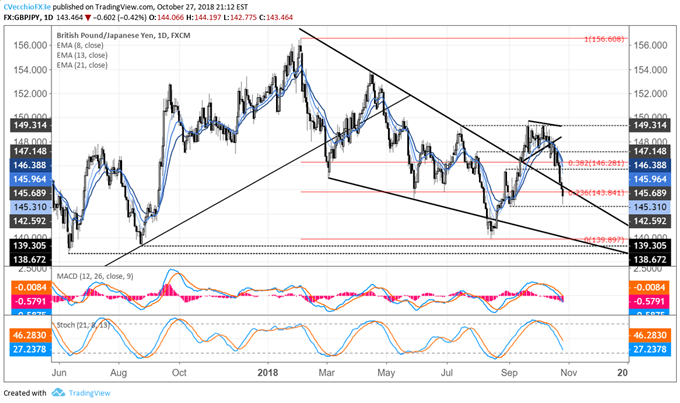 After a lack of initial follow-through, the bearish potential behind GBP/JPY’s symmetrical triangle was finally realized, with price plunging to its lowest level since September 7 in the process. Along the way to closing at 143.46, GBP/JPY cleared out the September 14 low (146.40), the late-August swing high (145.69), and the 23.6% Fibonacci retracement of the 2018 high-low range – a clear trail of technical damage.

For now, there is no other direction to look but lower; bearish momentum is too strong. GBP/JPY has extended further below its daily 8-, 13-, and 21-EMA envelope, while daily MACD and Slow Stochastics have pushed lower below their respective signal and median lines. The September low at 142.59 should be eyed lower, before targets towards the wedge base (and yearly low) near 139.90 will begin to take shape. 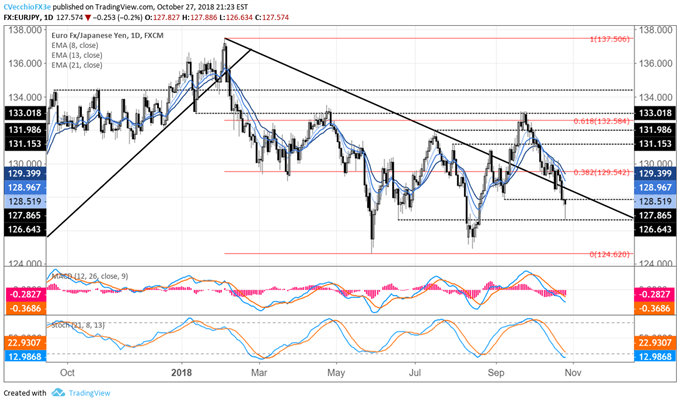 Last week EUR/JPY moved below 129.54, the key level previously identified as “the last line of defense.” To this end, pricereturned back to the descending trendline from the February and July highs near 128.80, then the mid-September swing low at 127.87. The daily hammer on Friday came near 126.64, the late-June support that was resistance in mid-August. This may speak to potential for a short-term rebound, but the momentum profile remains very bearish: price is below its daily 8-, 13, and 21-EMA envelope; and daily MACD and Slow Stochastics continue to trend lower deeper below their respective signal and neutral lines.

US Dollar Forecast: Dollar Advancing to 16-Month Highs Depends on Its Preferred Correlation