Dollar Advancing to 16-Month Highs Depends on Its Preferred Correlation

My outlook for the Dollar this past week was thrown for a loop. While the moderate level of resistance presented by the DXY Index around 96.15 was significant for more restrained markets, the sanctity of any near-term levels falls apart when volatility is added to the mix. And that is exactly what happened across the financial markets. The broad – and frequently aggressive – decline in risk assets this past week charged the Greenback through the ‘right shoulder’ on the five-month head-and-shoulders pattern that we have been tracking for this benchmark. Has the currency donned its familiar garb as a safe haven, which could in turn lift us beyond August’s swing high at 97 in the week ahead? That depends on both the state of sentiment across the markets and a few key correlations that we should watch when trading any of the Dollar-based majors. 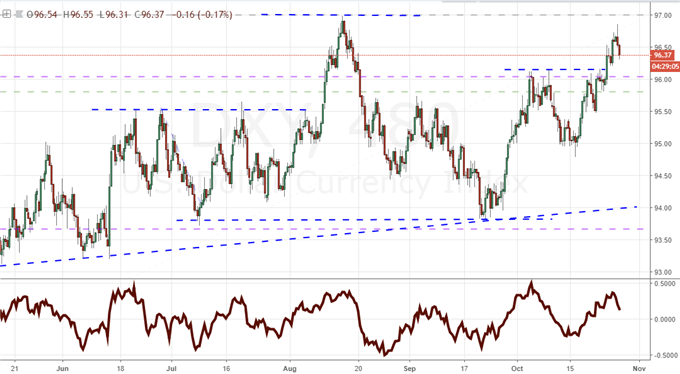 As we consider the potential of tearing up another possible reversal pattern, we should first remind ourselves that this would not be unprecedented. Far from in fact. Pulling out to a weekly chart, we see from the DXY that it was building into a larger head-and-shoulders pattern formation that stretched back to the beginning of 2015 (and was forming a confluent descending wedge as well) into the critical breakdown at the beginning of this year. That move clearly fell flat of the expected charge that would be expected after triggering such a noteworthy technical event. That reversal fell apart after the supposed kinetic charge was set. Disrupting a move before it even set would require far less technical weight. Yet, a bullish break would not immediately overcome the restraint in speculative effort and ensure momentum. If there is anything to learn from this currency and the markets in general these past months and years it would be that a technical break does not inherently translate into a trend. 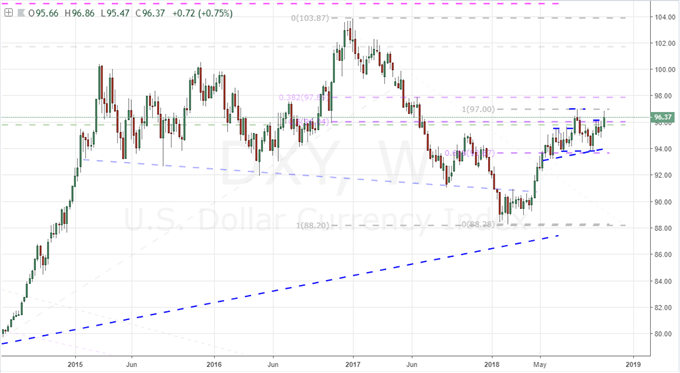 As I keep a wary eye on the Dollar’s actions around 97 and EURUSD’s intent as it approaches the mirror support at 1.1300, emphasis will be placed on a few correlations. This will be an effort to help establish speculative intent – which can in turn better determine whether we are dealing with a ‘false’ or ‘true’ break or reversal. One important light we have seen the Dollar follow on and off over the years is interest rate expectations. There is little doubting the Fed’s pace setting on the monetary policy board, but there is certainly question over how much it matters to traders and whether the role of carry is boon or burden. To keep tabs on this, the implied yield drawn from Fed Funds futures is very useful. Below I have the DXY overlaid with the implied yield for the December 2019 contract (subtracting the contract price from 100). That may be difficult to find or perhaps confusing for some; and in that case, the US 10-year Treasury yield is a good proxy. Should risk aversion continue, the Fed rate forecast will fall and appetite for tepid yield positions will drop. That would be a particularly poor outcome for the Dollar. 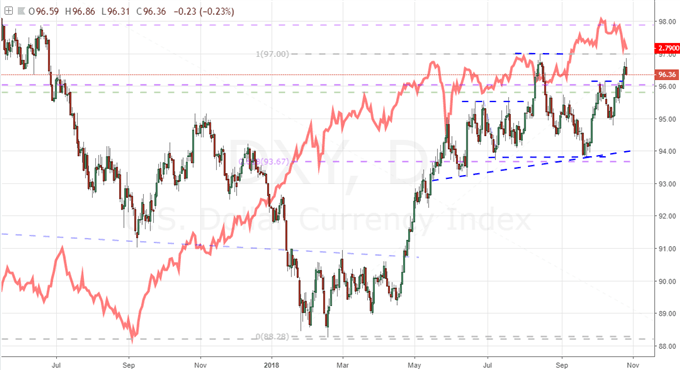 There is a certain point at which the relationship between currency and market conviction flips. In the event of a more systemic and severe risk aversion, the carry interest behind the Dollar will dim as the need for absolute liquidity will flourish. In an environment where global investors are most concerned about safe guarding capital, there are few more sound destinations than the Dollar – as capital moves into US Treasuries and money markets. And yes, that would still happen despite existential questions on the deficit course and trade wars. For this extreme role reversal, I would refer to the VIX Volatility Index. As it surges and moves into the 30s, 40s and higher; we will see motivations change markedly. Risk aversion will take on more of a panicked character and the market would more decisively bid the currency irrespective of interim technical levels. Should we not hit that particular tempo however, we need to revert back the Fed forecast connection. 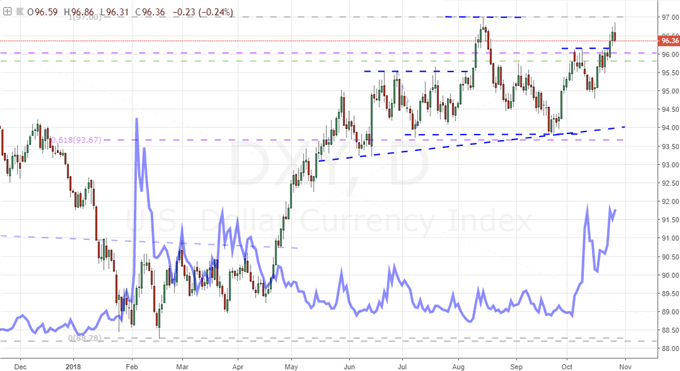 If determining which role the Dollar will take seems a difficult or abstract assessment even with the correlations, there is a good measure to refer to in USDJPY. This pair specifically pits two well-known havens against each other. What is important to recognize is they are not the same type of ‘haven’. The Dollar is prized for its liquidity – especially these past years as we have seen its benchmark rate rise. The Yen in the meantime is still the well-known facilitator of carry trade we refer as the ‘funding’ currency. If risk aversion is not so severe as to hit panic, the Yen will outpace the Dollar and USDJPY retreats. If we do dip into the madness though, USDJPY will charge higher despite any technical barriers along the way. 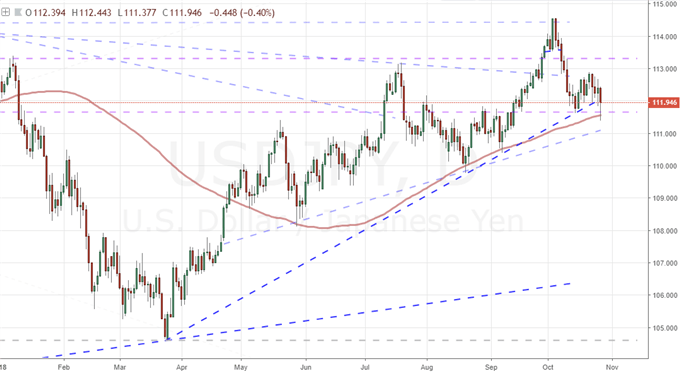 And, as a last thought as we track price action and consider intent, we should remember positioning. It is Just as undisputable as price itself. There has been a significant build up of interest behind the currency over the past three to four months, but the past six weeks alone have seen little interest in furthering exposure. There is uncertainty and a notable, significant net long exposure for the speculative rank. It is possible to have price rise despite stagnant changes in exposure – and more rarely see them move in opposite directions – but they do not deviate for long. If this is saturated and winded, it can set a sensitive in bias which makes the bearish interest more reactive and bulls more hesitant. 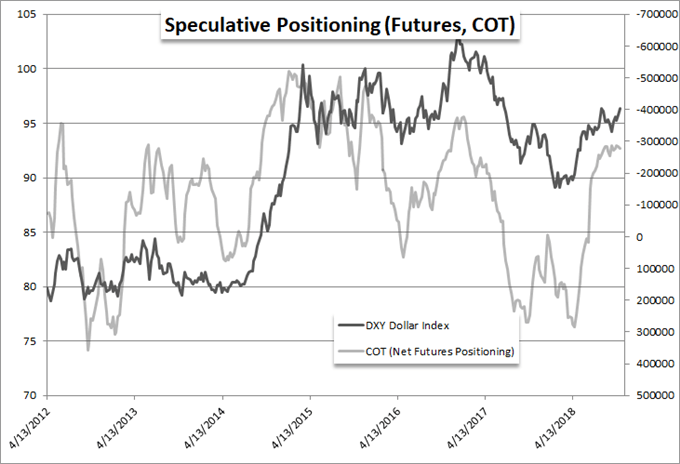