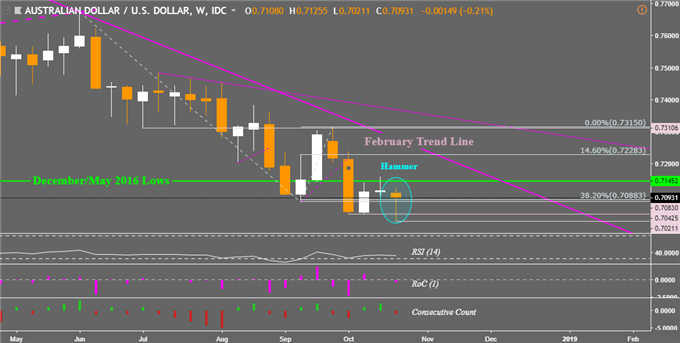 The Australian Dollar was on pace to break through the two critical areas of support this past week, exposing the August 2015 lows. In fact, prices at one point reached their lowest this year thus far. However, in the final moments, AUD/USD made a recovery essentially leaving it close to where it began at the beginning of when we last looked at the pair.

On the weekly chart, this has translated into a hammer bullish reversal warning signal. More progress to the upside in the days ahead is needed to argue that the Aussie Dollar is turning higher in a more lasting move though. A few barriers still remain that are helping to keep the dominant downtrend together. I am also currently shot AUD/USD after my entry order was reached, targeting the August 2015 low.

Zooming into the daily chart, the pair is sitting near the September 11th low which is also closely aligned with the 38.2% Fibonacci extension level at 0.70883. A descent through that now exposes a new range of support between 0.70211 and 0.70425. Meanwhile an ascent above the December/May 2016 lows around 0.71452 exposes the descending February trend line which is keeping the dominant downtrend intact. With that in mind, the AUD/USD technical outlook remains neutral. Last week, we offered a slightly bearish outlook for GBP/AUDas prices were testing the rising range of support from August. That has now been broken with additional closes achieved to the downside, offering confirmation of a reversal of the dominant uptrend from August. With that in mind, the British Pound is at risk to more gains in the Australian Dollar in the week ahead.

From here, near-term support is around the September 28th low at 1.80081 which is also aligned with the 50% Fibonacci retracement. A descent through that exposes 1.79233 followed by a range of support between 1.77806 and 1.78136. Meanwhile resistance appears to be the 38.2% retracement at 1.81789, pushing above that has the rising range of support in sight which may act as new resistance. Taking this into consideration, the technical outlook for GBP/AUD will have to be bearish.

Follow me on twitter @ddubrovskyFX for updates on these charts as well as to my AUD/USD short.