- The Japanese Yen finished right in the middle of the pack, gaining and losing ground against three currencies each.

- Despite stagnating last week, the Yen remains the best performing currency in October, and remains poised for further outperformance ahead.

-Retail traders continue to sell the Yen on rallies, suggesting that price gains are likely in the near-term.

With the rout of global equity markets taking a breather, so too did the Japanese Yen last week, slowing down its streak of gains to finish in the middle of the pack of the major currencies. But for NZD/JPY (+1.64%), no JPY-cross gained or lost more than +/- 0.4% last week, hardly any indication that the recent trend of Yen strength is finished.

The fact remains that the aggregate impact of tightening monetary policy, mismanaged fiscal policy (rising deficits), trade wars, high oil costs, and high inflation may be proving too much for market participants at present time. If so, it’s a combination of concerns that stands to benefit the Japanese Yen. 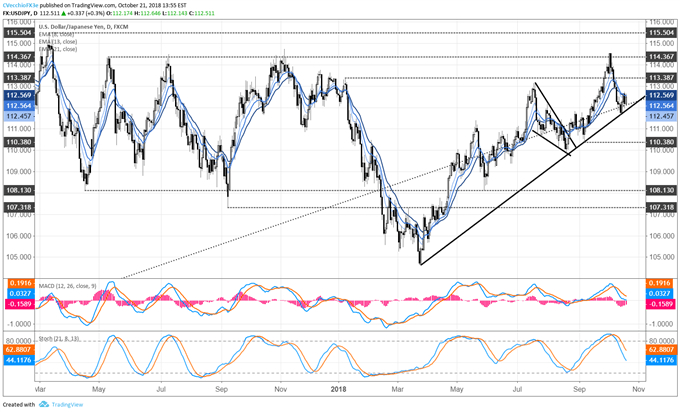 Significant support has appeared in USD/JPY around the uptrend from the March, August, and September lows as well as the longstanding uptrend from the swing lows in 2012 and 2016 (the Bank of Japan’s Kuroda’s trendline). This confluence of support comes in near 111.60 over the coming days. Below 111.60, the case remains the chart goes from bad to worse for USD/JPY. Despite the rebound on Friday, the technical standing remains precarious, with price below its daily 8-, 13-, and 21-EMA envelope. Similarly, bearish momentum continues to build, with both the daily MACD and Slow Stochastics trending lower and moving below their respective median/signal lines. For now, rallies should be sold; only a return back above 113.39 would warrant a more optimistic outlook. 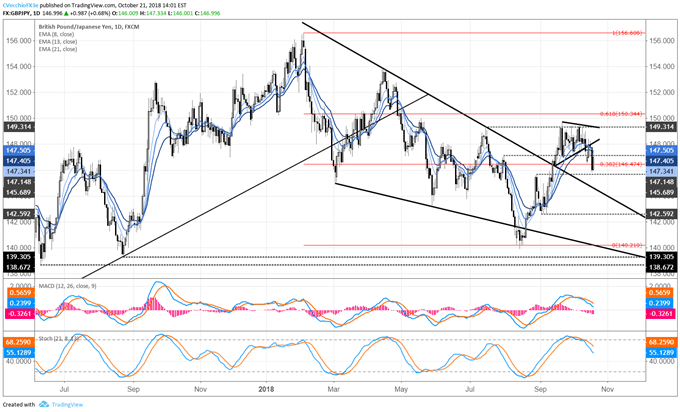 Even as GBP/JPY’s symmetrical triangle since September 14 already broken to the downside the week prior, coinciding with price closing below its daily 21-EMA for the first time since September 6, the pair failed to realize much downside in follow-up efforts. Accordingly, with none of last week’s technical levels broken, the key inflection point remains on the horizon near 146.94, which produced significant reactions in October and November 2017, and March, May, August, and September 2018.

Below 146.94, the September 14 low at 146.40 should be of interest before the late-August swing high of 145.69. If bearish momentum does not continue to develop, traders may want to stay away from GBP/JPY, which would likely then be back in its sideways consolidation. Only back above 148.00 should traders begin to consider bullish outcomes.

EUR/JPY almost had a very bad week until Friday’s sharp reversal, but that doesn’t mean the pair is out of the woods just yet having broken and remaining below the uptrend from its August, September, and early-October swing levels. Bearish momentum has continued to develop, with price holding below its daily 8-, 13-, and 21-EMA envelope. At the same time daily MACD and Slow Stochastics have continued to trend lower, with both below their respective signal or median lines.

Last week it was stated that “the last line of defense appears to be the 38.2% retracement of the 2018 range (February high to May low) at 129.54. Failure here would see a return back to the descending trendline from the February and July highs near 128.80, then the mid-September swing low at 127.87.” We closed last week at 129.53, suggesting that the market is still stuck at this point of indecision. Deeper losses towards 127.87 are looking increasingly likely; this viewpoint would be nullified upon a close back through the daily 21-EMA.

US Dollar Forecast: Can the Dollar Draw from EURUSD, USDJPY to Return to 15 Month Highs?