Can the Dollar Draw from EURUSD, USDJPY to Return to 15 Month Highs?

The US Dollar earned another swing higher this past session, saving the currency from sinking deeper into a broad October correction and potentially moving the currency into position to complete a head-and-shoulders position. On shorter term charts, the DXY index offers up a ‘stair step’ climb through the middle of the week that gook advantage of the congestion that developed around 95.00. That psychological figure happened to represent the midpoint of the September 21st to October 9th charge. As far as technical weight goes, this was not a particularly robust figure, but it gained influence due to the general market conditions. The retreat from the currency that preceded the bounce carried limited momentum. In contrast, the resistance in the 96.20-96.00 area has grown in notoriety as this past week’s turn has established a triple top. If a strong bid for the Dollar forms in the more liquid crosses, this ceiling will not hold back a meaningful tide. However, if trading conditions continue to show preference for range and ‘path-of-least-resistance’ movement, it will likely prove sufficient for bulls to take profit or opportunist bears to jump back in for a short-term swing. 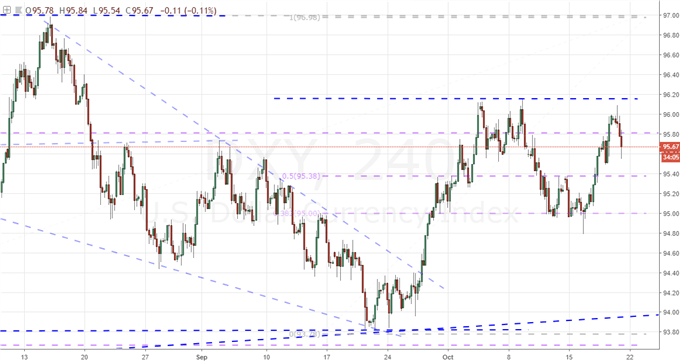 Aside from the general state of market conditions that continue to work against serious progress from a Dollar rally is the context of the bigger picture. From the daily and weekly charts of the DXY, it isn’t difficult to spot the head-and-shoulders pattern that has formed since mid-May. With last week’s bounce, the market put off the completion of the ‘right shoulder’ which would have been solidified if we returned to the ‘neckline’ around 94.00. However, this detour does not obviate the pattern. The left shoulder shows the level of distortion that can occur as the general pattern forms – technicals are not always pretty. Pushing above 96.00 is certainly a possibility, but conviction should be reserved until the benchmark makes a serious bid to overtake 97.00. Above that threshold, we could return to making progress on a much larger reversal pattern that seemed to trigger in August but with subsequent retreat into September seemed to signal a false break stall. It’s a possible course, but trading the range from 97.00 to 94.00 is requires far less conviction. 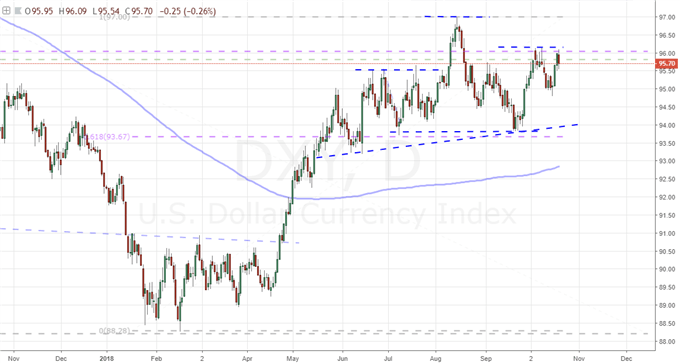 Gauging the appetites of the speculative rank, there remains a distinct skew in futures positioning. The net positioning derived from the CFTC’s Commitment of Traders (COT) report below shows the leveling out of appetites following the dramatic charge of bullish interest (and short covering) in the three months through August. While not necessarily a short-term leading indicator, it aligns to the momentum considerations that can side track intentions to plow through technical boundaries standing in the markets way and in turn make those modest hurdles neigh insurmountable. It is possible that this is a pause in a broader advance, but that will prove more difficult to facilitate. Recent history suggests the pull of unwinding will grow following the consolidation. 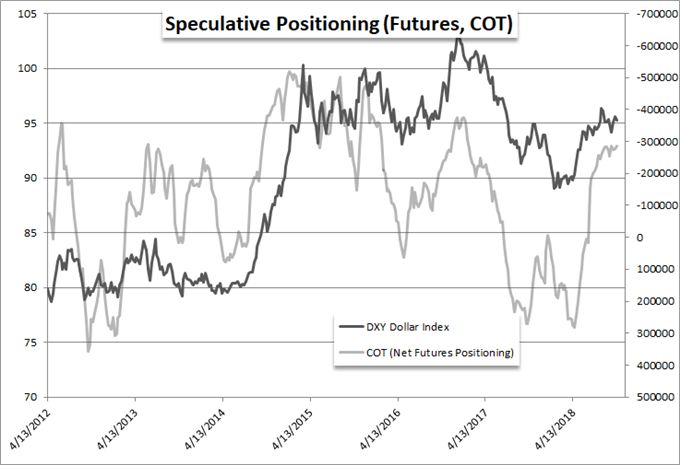 Important in determining next moves for the Dollar is establishing the unique pressures leveraged through its counterparts. While the Greenback is by far the most liquid of the major currencies, it is not always the most proactive of its peers. It too can drift and fall victim to the determination of large counterparts. Given the general status of the currency’s standings both on a trade-weighted (DXY) and equally-weighted basis, it looks readily exposed to the shove of an active cross. At the top of the liquidity hierarchy, EURUSD is looks much like the Dollar’s self-determined picture. Here, the right shoulder of an inverse head-and-shoulders pattern was pushed when we dropped below 1.1525 earlier in the month. However, the influence of the bigger picture’s restraint still exudes. It so happens that 1.1450 is the rough mid-point to the 2017-2018 bull trend, but I don’t think this carries any greater weight than the August swing low of 1.1300. There are no pressing levels from which traders can recharge speculation intent at the moment. 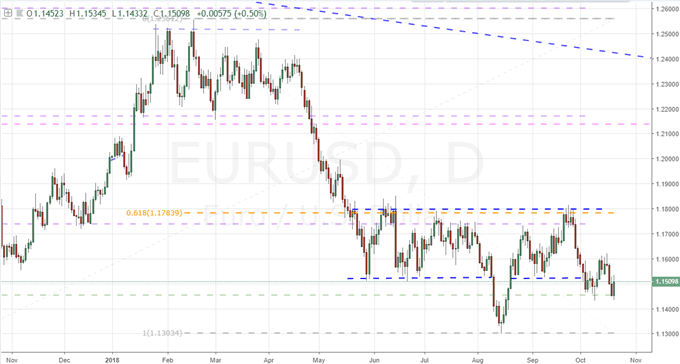 One step down in liquidity, the USDJPY may present one of the more idealized sources to supply a bullish swell for the Greenback. After the retreat of the past few weeks – which included a six-consecutive session retreat that matched the longest slide since May 2017 – we found the pair stabilize the confluence of technical points anchored by the rising trendline that originated with the March swing low. A rebound from this pair represents a path of least resistance paired with a recent buoyance in volatility that has supplied significant swings in the past few months. If there is to be a Dollar bid that spills over to the wider market, this would be one of the more practical sources to expect it. 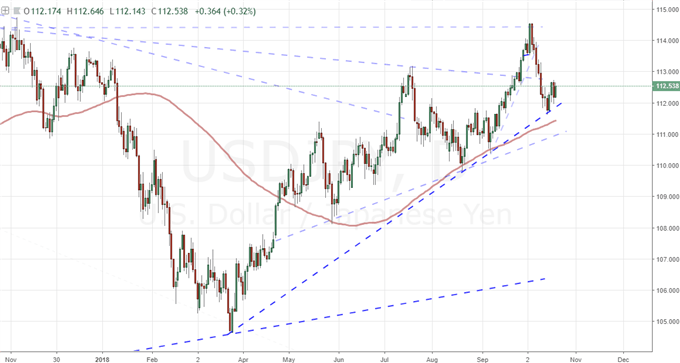 Consulting the rest of the majors that account for the bulk of the Dollar’s liquidity, the technical lean is far more bearish in nature. From USDCHF, AUDUSD and NZDUSD, the benchmark currency is perched at the peak of meaningful, medium-term USD bull trends. They can of course continue to push the US currency to highs not seen in months or years, but that would likely need to arise from a deeper well of conviction. From GBPUSD, we have the third most liquid Dollar-based major and a short-term pattern that promotes at least a modest favor for the USD bears. The wedge below can heft a short-term retreat from EURUSD at highs. What’s more, given the position behind this pair, a break – which will grow inevitable at a certain point – can be referenced for intent on the Dollar itself. What is clear for trading the Dollar, we need to get a sense of its standings across its major counterparts to better orient so long as there isn’t an overriding charge behind the market. 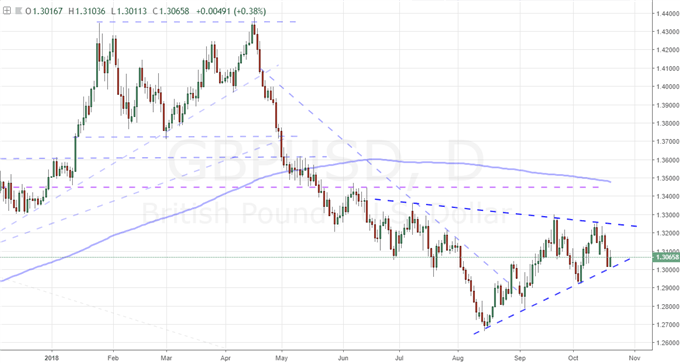