The Dollar’s steady climb between the closing week of September and opening week of October was brought to a close this past five-day stretch. Intention for a turn was starting to show through in momentum, even if the explicit resistance levels were not particularly remarkable. In this environment – for the financial system rather than just FX – momentum should trump explicit lines or zones of support and resistance. Too many false breakouts have shown up in otherwise ‘clean’ charts over the past few months. For the DXY Dollar Index, progress started to flag with rate of change (ROC) and momentum (MOM) indicators flagging a divergence to price. With the second effort to overtake 96.20 rejected, a double top seemed to cap bulls’ enthusiasm for a run having already seen the close of the 7-day advance the week prior through October 3rd (a climb that matched the longest advance since the US Presidential election). 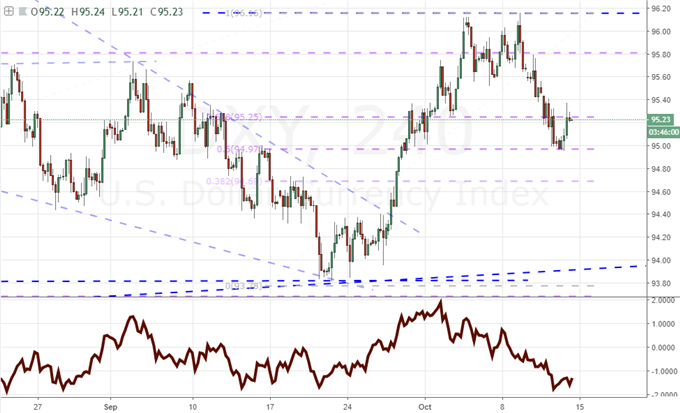 The correction the DXY has put in for has already deflated a lot of the short-term speculative build up. The interim low around 95 set between Thursday and Friday reflect a mid-point of the September-October range and the 68.2 percent Fibonacci retracement of the August peak high to the low set last month. Beyond that short-term confluence, this technical barrier holds relatively little strength itself. In other words, it wouldn’t take much speculative pressure to add another leg lower by the bears. The more remarkable support is station around 94.00/93.74 where we find a ‘right shoulder’ on a larger head-and-shoulders pattern that has formed since May. Trading within this range (up to the recent high of 96.15) requires relatively little conviction from the masses. Breaking beyond either ceiling or floor on the other hand carries the potential for genuine momentum. Yet, as we start next week, we are essentially in the middle of this technical limbo. 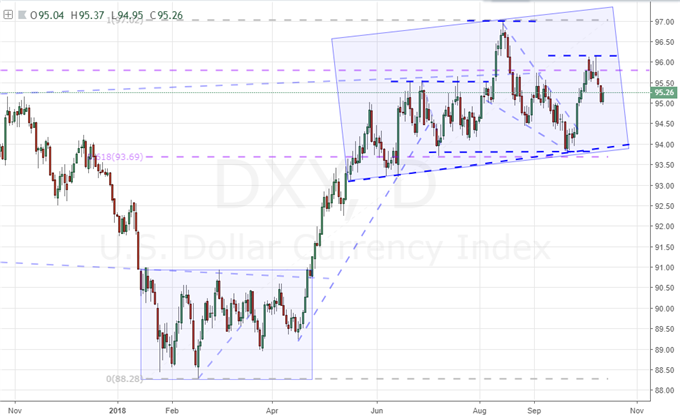 If we are considering the potential for run between the bullish versus bearish scenarios, a tumble would be the more loaded outcome were it to be realized. A break above 96.15 would then immediately put 97 as the ‘head’ in the aforementioned pattern as next stop and then it would be up to ‘true believer’ bulls to run momentum from there. Alternatively, a break below 94 would mark completion to a high profile, multi-month reversal pattern. The move back into 2018’s range would require relatively low commitment compared to a breakout, similar to traversing the shoulder of the H&S pattern. Adding to the assessment of speculative intent, we find from the COT’s net speculative futures positioning figure that the medium-term bull trend from April leveraged a far more dramatic increase in bullish positioning underneath the currency. That suggests a contrarian risk for an oversaturated exposure that lost lift long before the bid dried up. 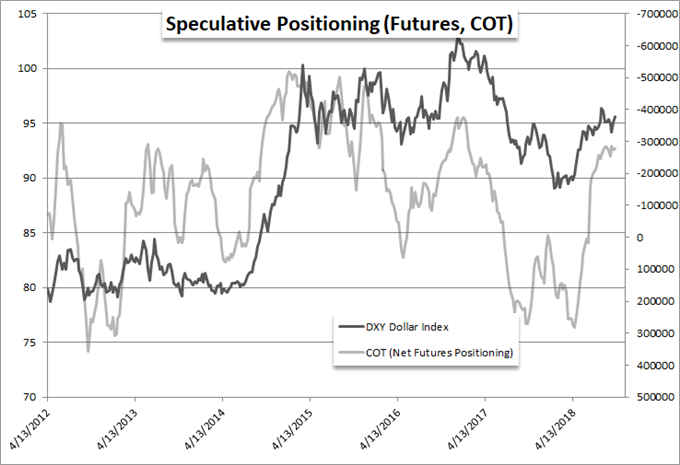 Looking at some of the key majors representing the depth of liquidity for the Greenback, the EURUSD offers a mirror of the DXY. Here, the ‘shoulder’ runs all the way up to 1.1800 for a convenient, horizontal ‘neckline’. Through this important pair, we can garner a better sense of intent for the underlying Dollar itself. If it were to edge new October lows, it will distort the reversal pattern (an inverse H&) and rob a considerable amount of the intent built into the currency with its recent stall. And in the meantime, it is still a ways to go before we hit a serious Dollar support level – 200 pips up to 1.1800. EURUSD bulls will first have to cover that ground before they can put serious pressure on the market. 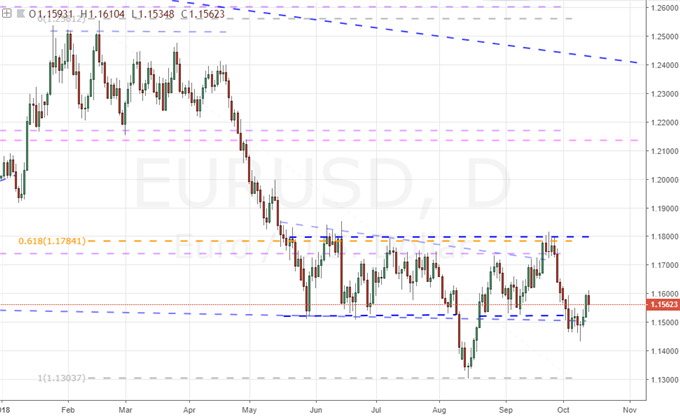 Range conditions are even more thoroughly anchored for the Dollar via USDJPY. We were following the reversal pattern on the 4-hour chart last week (a head-and-shoulders on that lower time frame) which triggered this past Monday with the drop through 113.50. The move was clean and the momentum encouraging, if not overwhelming. Now, after the 7-day drop through this past Friday – the longest slide since March 2017 – we are coming into a zone of support. The confluence of Fibonacci’s, moving averages (below 100-day) and trendlines is not conveniently precise. That doesn’t diminish its capacity to trip up the market’s momentum. If we make it below 111, the months of chop preceding this most recent 8 week v-top will go to work in slowing anything but a committed Dollar tumble. 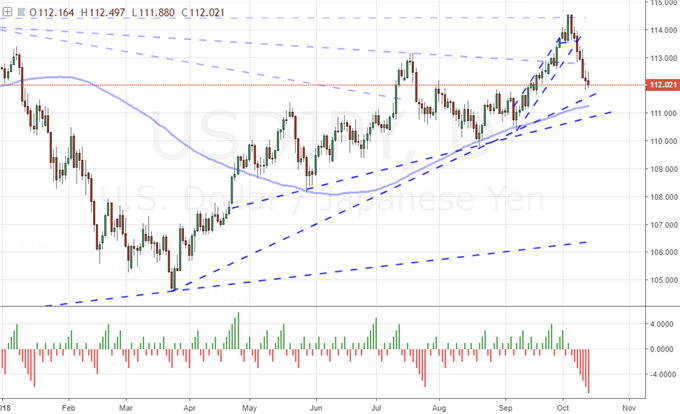