The impressive reversal of fortune for the Dollar these past weeks – from a tentative bearish reversal break to clearing range resistance – has once again showed signs of flagging momentum before any serious commitment to trend has been made. When the DXY was pressuring 94 as a three-month support carving out the ‘neckline’ on a prominent head-and-shoulders pattern, the potential for genuine reversal looked suspect. Aside from the fact that few of the Dollar-based majors offered up the same sense of imminent charge as the index and perhaps EURUSD, the general market environment simply reflected little of the conviction normally associated with trending markets. It is possible for a single currency or asset to ‘go it on its own’, but that is typically the exception to the rule and thereby a low probability. Successful trading rarely involves chasing low probability scenarios. Those market conditions tripped up the bearish potential a few weeks ago, but they still persist now even if the course for the Dollar has reversed. 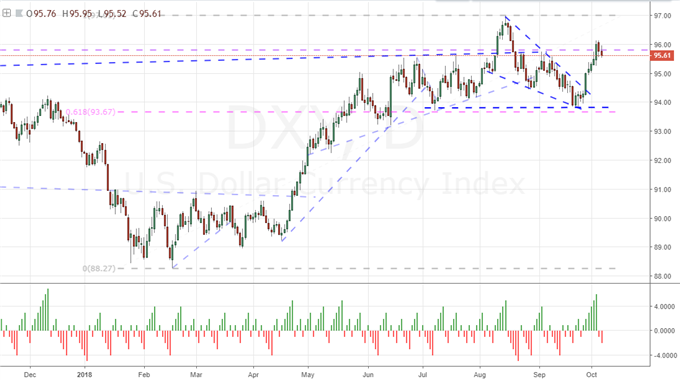 When we look to the DXY Dollar Index, we find some modest resistance in the form of a possible ‘right shoulder’ on the aforementioned H&S pattern around 95.50. Technically-speaking, we broke that interim ceiling in intraweek price action; but a break and intent for follow through are very different concepts. With the six-day rally through Wednesday ending (the longest stretch of consecutive gains since December), it seems much of the enthusiasm was spent on traversing the range. Oftentimes, a break can generate further speculative flush, but that clearly was not the case this time around. If a fresh bid is found in the week ahead, we will still be in a general range all the way up to August’s swing high at 97. The path of least resistance in an environment of oscillating conviction is more likely bearish.

From EURUSD, the same tepid take to a moderate break was clear in the struggle to transition the slide below 1.1500 support into a move with follow through. The inverse head-and-shoulders pattern is even clearer for this pair – which is important as this is a far more heavily traded reflection of the Dollar than the DXY or other crosses. The extremes of the range this benchmark pair is working with are 1.1800 resistance (also the neckline of the inverse head-and-shoulders) and 1.1300 support in the August swing low which also represents the ‘head’ of the pattern. 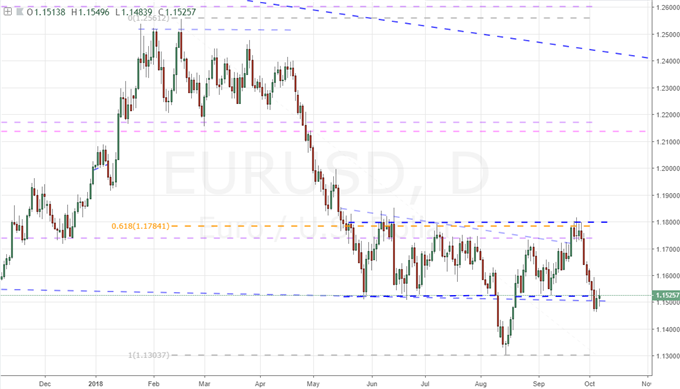 When we are evaluating the potential for the Dollar, it is important to consider the performance of the individual currency rather than the influence of EURUSD alone – which also represents approximately 2/3rds of the weighting of the DXY. If we look at the equally-weighted index of the USD below (made of the 7 most liquid majors), we find that the Greenback has actually cleared highs not matched on a close basis in 18 months. That is a more bullish read on the currency. However, such a position does not materially change the restrictive conditions. If it is difficult to facilitate follow through, further immediate hurdles will not necessarily change the circumstances for expectant bulls. 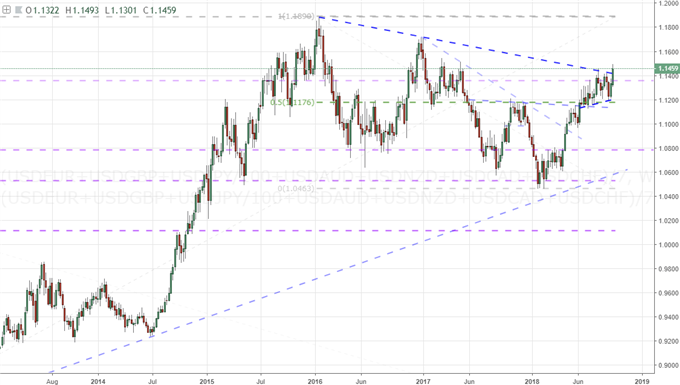 If the Dollar is to continue its advance, it will likely be paced until a benchmark like EURUSD can overtake its recent lows (Dollar highs). That will present a likely trading backdrop of starts and stops. However, if the currency does continue its charge forward, this specific benchmark cross is one of the best technically (and fundamentally) positioned crosses to take advantage. Alternatively, a turn in the Dollar’s course can offer up a much larger group of appealing pairs. A full-scale reversal should not be presumed with any initial turns implemented this coming week. For that, waiting for 94 on DXY or 1.1800 from EURUSD to give way would be more appropriate for conviction. However, an interim correction would fit well in a range swing. The core of the H&S patterns is opportunity for both of the aforementioned benchmarks, but pairs like USDJPY (below), AUDUSD and NZDUSD have short-term over-extended bearings that can offer a speculative charge as well. 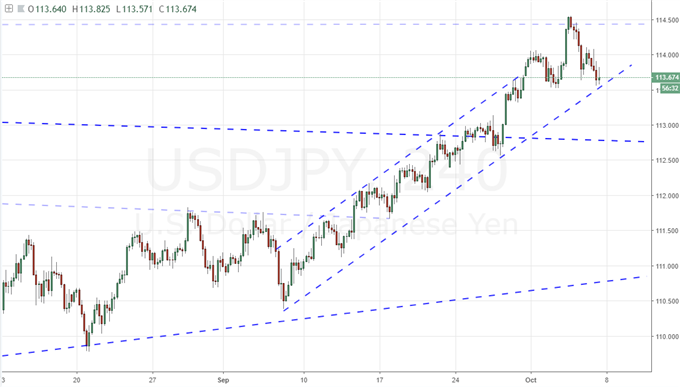