After former support/resistance held from last week’s technical outlook at 0.73106, the US Dollar launched a massive rally against its Australian counterpart last week. AUD/USD prices sharply descended through all critical near-term support barriers, achieving a new 2018 low around 0.70446. We also saw AUD/USD drop as much as 2.36% which was the largest decline over the course of a week since November 2016.

So where does this leave the Australian Dollar for the week ahead? Well the sharp decline has exposed the August 2015 and January 2016 lows around 0.69 and 0.68274 respectively. But do note that on the weekly chart there is some positive RSI divergence which warns that downside momentum may be fading. This may be a sign that some consolidation/correction could be due. 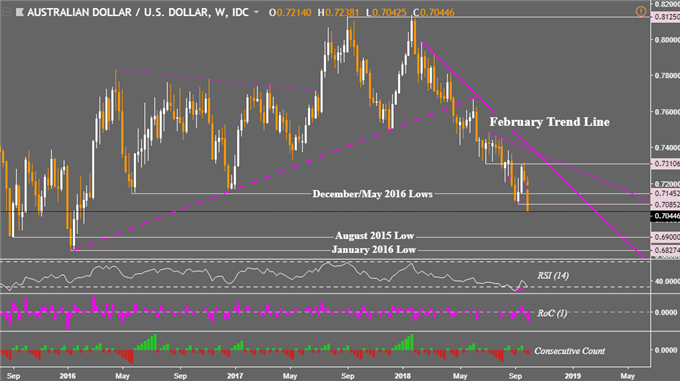 Zooming in on the AUD/USD daily chart, we can get a closer look at how the pair fell to a new 2018 low. 0.71452 may have been a formidable support barrier once, but that was no longer the case. Then came the September 11th low at 0.70852. Should the pair correct higher in the week ahead, those areas may come back as former support now resistance.

The next support barriers that stand in the way between AUD/USD and 2015/2016 lows are near-term Fibonacci extension levels. Immediately ahead is the 50% midpoint at 0.70193 followed by the 61.8% one at 0.69495. Unlike the weekly chart, positive RSI divergence is not present. Taking this information into consideration, the weekly technical outlook for AUD/USD turns from neutral to bearish. 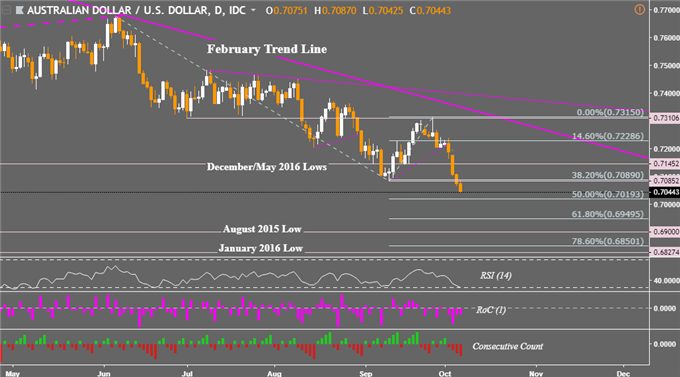 Another currency that made significant progress against the Australian Dollar last week was the British Pound. Looking at the weekly GBP/AUD chart below, we can see multiple critical resistance barriers that were broken. Not only did the pair push above the 1.83436 2015/2016 horizontal barrier, but also a range of resistance from March/April earlier this year was broken.

This effectively took GBP/AUD to a new 2018 high around 1.8595 which was last seen back in June 2016, which was at the time of the Brexit Referendum. This effectively exposed the highs achieved in the lead up to the vote between 1.96743 and 1.97356. Unlike in the AUD/USD weekly chart, we see the opposite which is negative RSI divergence, warning that upside momentum is waning. 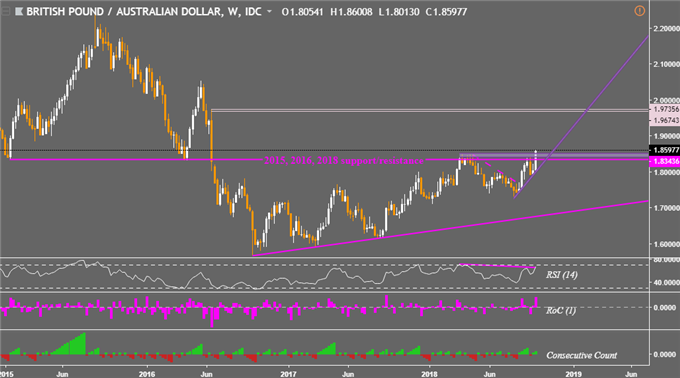 We also see some negative RSI divergence when zooming in on the daily chart. While we may have experienced a critical breakout to the upside in GBP/AUD, bulls should proceed with some caution to see how trading unfolds in the week ahead. Should the pair experience a pullback, the range of former resistance between 1.84184 and 1.85086 could act as now support.

Otherwise, the critical breakout has the pair eyeing the 61.8% Fibonacci extension next as immediate resistance. An ascent through it then exposes the 78.6% level at 1.88002. Barring the RSI signals, GBP/AUD may be accelerating its dominant uptrend from August. The technical outlook will have to be bullish. For updates or questions about the Australian Dollar, you may reach out to me on twitter here at @ddubrovskyFX. 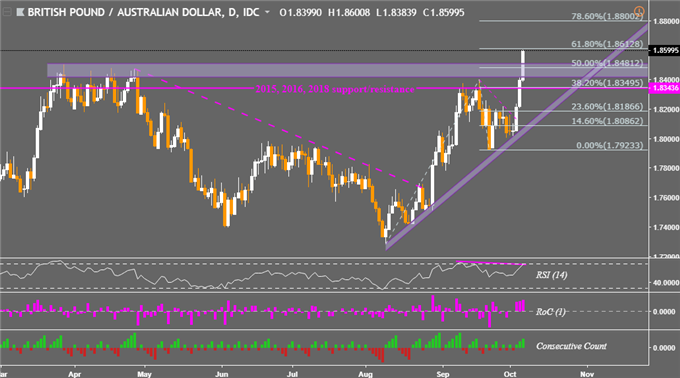