The Japanese Yen is very close to its 2018 lows against the US Dollar and USD/JPY’s latest uptrend has extended into another week.

The fundamental backdrop looks extremely Dollar positive, at least against the Japanese unit. The US Federal Reserve is expected to raise interest rates once again on Wednesday and to the leave the door open to another rise in December. Japanese monetary policy meanwhile remains stuck in ultra-accommodative mode with Bank of Japan Governor Haruhiko Kuroda recommitting it to that policy on Tuesday.

Both currencies tend to play the haven role when trade-war fears dominate market thinking, but the Dollar seems to be catching the best of this bid right now.

Technically speaking, USD/JPY is now back in a trading range, which bounded the gains of mid-July, when the pair made its most recent significant highs. They are effectively the highs for this year too, being matched only on the long slide which kicked off 2018.

The daily-chart uptrend line from the lows of March (that long slide’s destination, as it turned out), is now so far below the current market as to make it of dubious value when we consider near-term support. 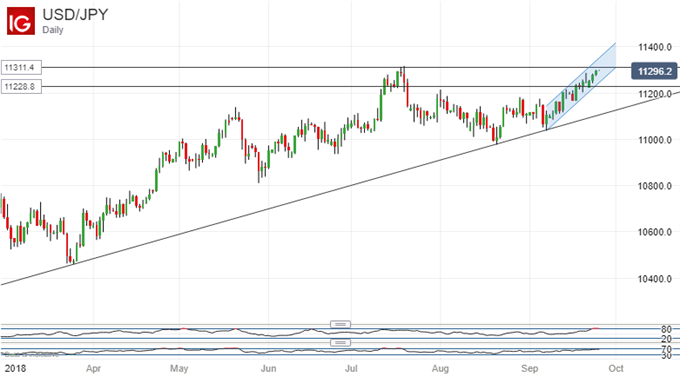 However, we can zoom in on that much newer blue uptrend channel which has been in place since September 9. The pair is clearly bang in the center of that channel now. 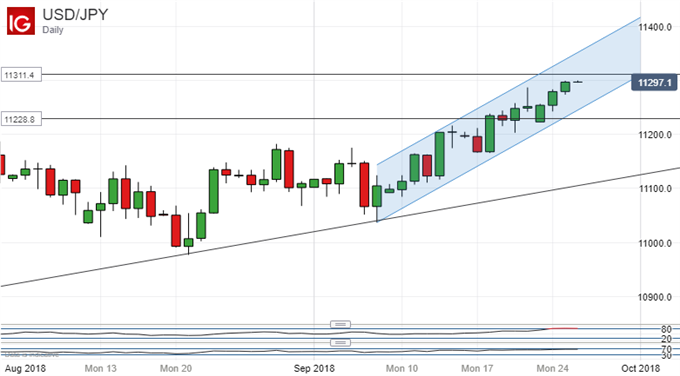 USD/JPY is also some way above its 20-, 50- and 100-day moving averages, with its momentum indicators looking a little stretched. The pair probably needs to consolidate its position within that trading band from last July before it can stage a lasting push higher. Reversals will probably find support in the wind range between 111.72 and 110.56, which bounded trade between late August and mid-September.

Similar patterns are visible across the Japanese Yen complex, probably driven in no small part by USD/JPY gains. The Euro is perhaps the closest match, with EUR/JPY back up to peaks not seen since April. The single currency remains in a quite well respected uptrend channel against the Japanese unit.

There is at present little compelling reason to think that a reversal is in prospect but, as with USD/JPY, the sharp rose could probably do with a period of consolidation.