- The Japanese Yen was the worst performing currency last week, with GBP/JPY surging by +2.08% and still poised for more gains.

- Retail traders have been quick to sell USD/JPY rallies, suggesting that price gains are still likely in the near-term.

The Japanese Yen had a rough week, erasing all of its gains in September across the board in the process: USD/JPY is now up by +0.93% on the month after gaining +0.96% between September 9 and 14. The same can be said of the best performing cross last week, with GBP/JPY adding +2.12% over the past week, which is now up by +1.77% in September overall.

The technical damage done across the various crosses is widespread enough to consider the coming week a critical juncture for the Japanese Yen. The importance of the coming week is only underscored by the near-term outlook for the Nikkei 225, which has turned bullish following its breakout attempt. As if typically the case, a weak local currency typically goes in hand with a strong local stock market; it is no coincidence that Japanese Yen appears to be on the verge of weakness versus the British Pound, Euro, and US Dollar (among others) as the Nikkei 225 gets ready to trade higher. 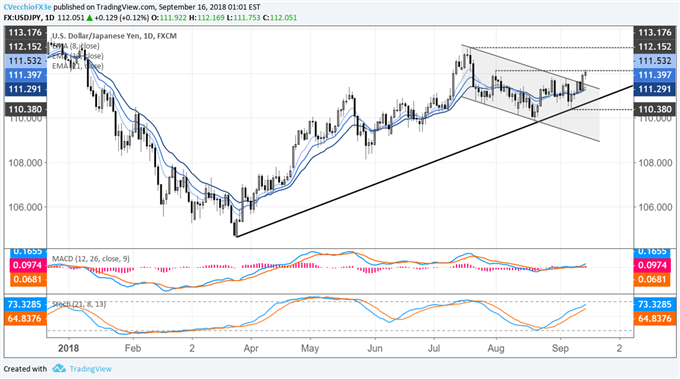 Bullish momentum is picking up among many of the JPY-crosses and breakout conditions are afoot. In USD/JPY, price closed the week at 112.05, clearing out the downtrend from the July 19 and September 5 highs in the process. Price has yet to close above the August 1 swing high at 112.15, but we did see USD/JPY peak through the resistance, hitting a high of 112.17 last week.

Overall, with price comfortably above its daily 8-, 13, and 21-EMA envelope, and both daily MACD and Slow Stochastics trend higher above their respective signal or neutral lines, the near-term outlook for USD/JPY has turned bullish. A return back to the July high at 113.18 is targeted; invalidation at present time would occur below the September low of 110.38. 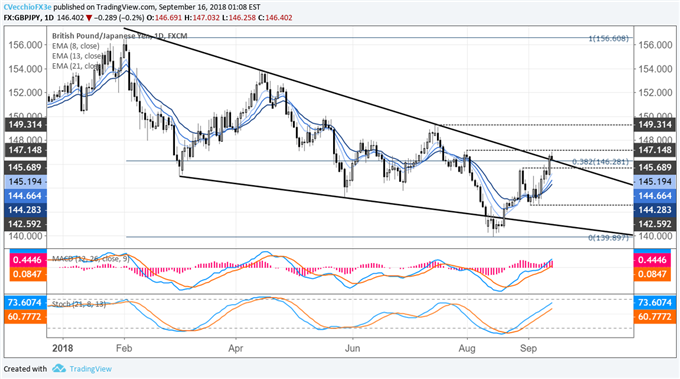 GBP/JPY may have the most favorable technical conditions in the near-term, of the three pairs reviewed in this note. Several key technical hurdles have already been cleared to the topside with last week’s close at 146.40: the late-August swing high; the downtrend from the April and July highs; and the 38.2% retracement of the yearly trading range.

Overall, price is solidly above its daily 8-, 13, and 21-EMA envelope, and both daily MACD and Slow Stochastics continue to trend higher above their respective signal or neutral lines. As such, the near-term outlook for GBP/JPY is bullish. Clearance of the August 1 high at 147.15 would necessitate an upgraded outlook for additional time, ultimately targeting the July high near 149.31. A move below the late-August swing high at 145.69 would give cause to reduce the near-term outlook from bullish to neutral. 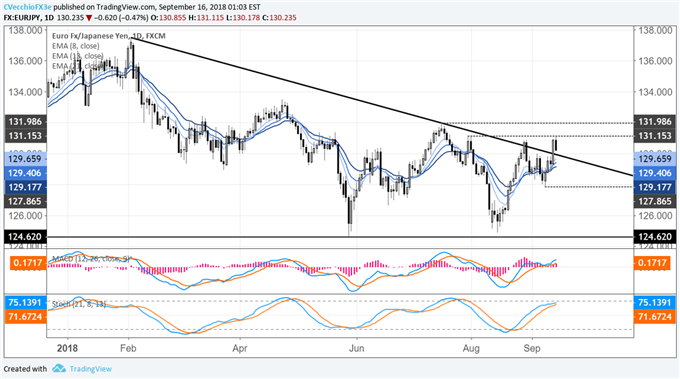 EUR/JPY’s chart is more similar to GBP/JPY than USD/JPY, although EUR/JPY lacks a bullish catalyst in the form of shifting Brexit outcomes the way that GBP/JPY does. Nevertheless, price now finds itself trading through the downtrend off of the February and July highs, attempting its second breakout higher in three weeks following its close at 130.24 on Friday.

The seeds have been planted for more gains in the days ahead, although clearing out the August 1 high at 131.15 would give greater confidence in such an outlook. Despite Friday’s down day, EUR/JPY continues to hold above its daily 8-, 13, and 21-EMA envelope, and both daily MACD and Slow Stochastics trend higher above their respective signal or neutral lines. The nascent bullish outlook would receive a vote of confidence by clearing out 131.10/15, which would raise the possibility of a retest of the July high near 131.99.