The Australian Dollar resumed its descent against its US counterpart, clocking in its largest decline in a week since the middle of June which was over two months ago. This prolonged AUD/USD’s 2018 dominant downtrend and effectively cancelled out a bullish reversal pattern that once threatened to push the pair to the descending trend line from February. We may see more declines in the week ahead. 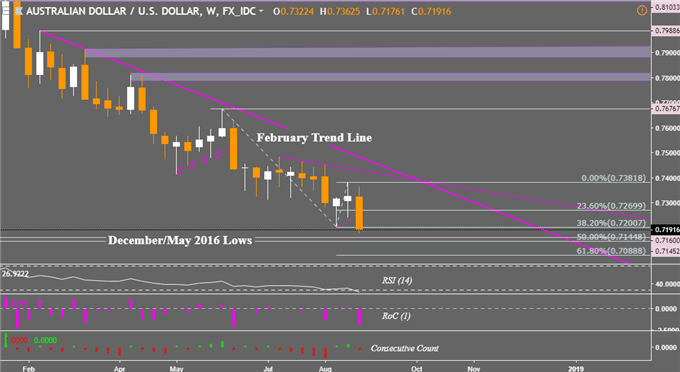 If we look at prices on the AUD/USD daily chart, we can see that it went on a daily losing streak of 4 which was its longest in over two weeks. We also had the pair fall under a near-term rising line and close at its lowest point this year thus far. The descent through the August 15th low around 0.7200 now exposes the December and May 2016 lows between 0.7160 and 0.7145.

Falling beyond that could have AUD/USD eyeing the 61.8% Fibonacci extension at 0.7088 as it heads for 2016 lows. Meanwhile, immediate resistance appears to be the 23.6% extension at 0.7269. A climb beyond that exposes the August 21st high at 0.7381 which would put the Australian Dollar back into the range it consolidated in for a couple of months.

While the new 2018 low opens the door for the pair to resume its dominant downtrend, do note that downside momentum is ebbing on the daily chart. This is represented by positive RSI divergence and this warns that prices could turn higher next or consolidate. While this does not guarantee a reversal, it should warrant caution especially if the pair find itself struggling to descend through the December and May 2016 lows.

The AUD/USD technical outlook will change to bearish from neutral for the week ahead.