In the span of a week, a rapidly building bullish speculation for the DXY Dollar Index born of a technical pattern over 12-months in the making was laid flat. While the general trend has yet to falter, the momentum that would readily secure the next leg of the currency’s six-month advance has been waylaid with a drop back below 95.70. That particular technical level has carried remarkable weight through the past few months, yet has been breached with little sign of conviction multiple times more recently. Initially, this confluence of a ‘neckline’ for an inverse head-and-shoulders pattern dating back to July 2017 and the midpoint of the 2016-2018 bear wave looked to the hard fought break of a loaded move that could carry a new trend. Yet, liquidity distorted the picture.

We are heading through the final week of the August lull that we usually find in activity levels for the broader financial markets – a side effect of seasonal assumptions. It is difficult to produce major technical breaks during such periods, but it is far more challenging to mount lasting trends when there is little market depth to power an ambitious move. More often, we find breaks are levered inversely by the thin activity when speculative or fundamental surprises cross the wires; but the subsequent move quickly runs out of patrons and stalls. That is what we have seen these past two weeks with the Dollar. In fact, the DXY has dropped 6 of the past 7 days – which was heavily dictated by EURUSD’s rise of a technical 7 out of the 8 trading days (including a 6-day unbroken run that matched the longest bull run for the pair since May 2016). 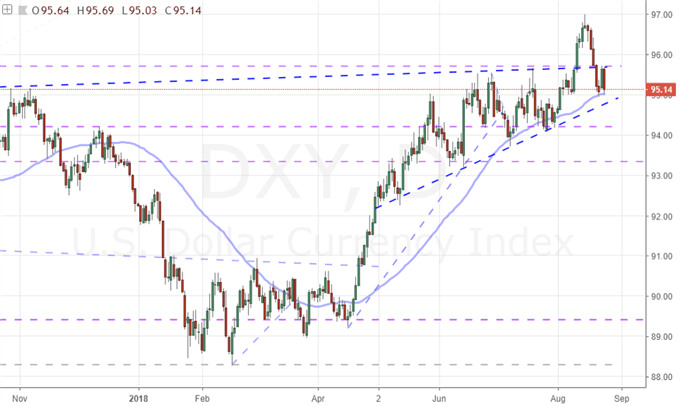 If all that happened with the Dollar were a pullback to the former resistance as new support and the market loitered above that 95.70 support, there would still be a fairly strong technical backdrop for progress on the unfolding bull trend. However, the fact that the market slipped back below that former resistance and refused to respect it as new support upon which build up the next wave of confidence significantly weakens the drive for progress. To be clear, there is still notable support still in place as of the weekend with the 50-day moving average and rising trendline of support dating back to May around 95. Yet, that is a level that looks itself suspiciously like a ‘neckline’ of its own following a full setup of a ‘traditional’ head-and-shoulders pattern through the entirety of August. A break lower would be almost as provocative as the break above 95.70 could have been, but the same caveat will hold for any bearish implications that undermined the bullish effort: liquidity. A break in the week ahead would attempt to catch traction one of the most renowned weeks for quiet in seasonal terms; but with a long list of thematic issues fighting the dying light (US political risk, trade wars, monetary policy speculation), I wouldn’t write the potential off. 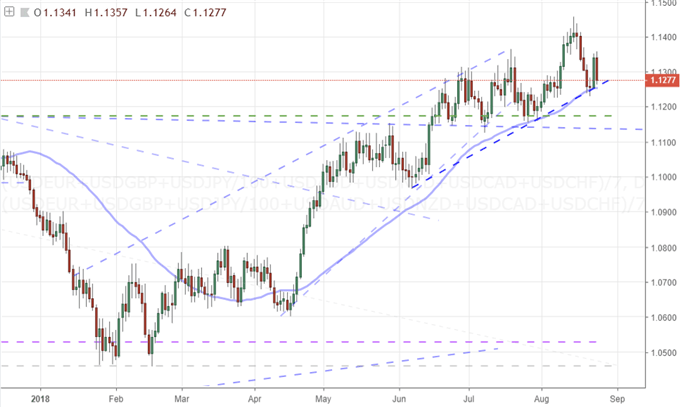 Looking at the Dollar with less weight to the EURUSD (though it does account for an approximate 2/3rds of transactions), the implications of the 12-month inverse head-and-shoulders pattern and the more recent upright mirror in the DXY are less prominent. We can’t trade my equally-weighted index above (unless you made a synthetic basket of the majors), but the balance of imminent technical triggers is not overwhelming across the other liquid majors. GBPUSD attempted an upswing from 1.2650, but momentum faded in the latter half of this past week and still looks like a correction in a prevailing trend that we have seen since April. USDJPY produced a bullish break of a descending wedge Thursday but now trades directly in the middle of the past two month’s range. There has been considerable AUDUSD and NZDUSD volatility lately, but the Greenback-favorable bear trends of the past four months remains unbroken. USDCAD is one of the most impressive pictures with another move below 1.2950 likely to add considerably more credibility to the evolution of a bearish trend.

The Dollar in aggregate and many of the USD-based majors look to be at a technical crossroads. However, picking direction is not the difficulty here. It is mounting the momentum necessary to make the moves productive. And, if liquidity continues to plague efforts through this final week of the Summer, we should be mindful of what we expect price action to accomplish. That said, September brings a new month and contrasting expectations for activity (volatility) participation (liquidity).